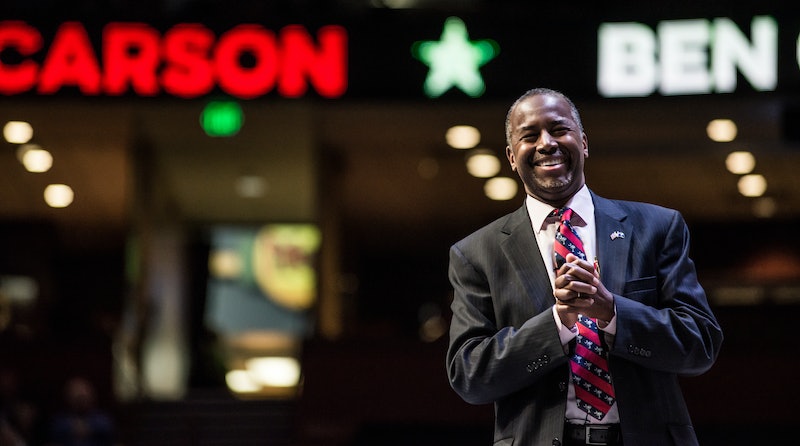 Dr. Ben Carson, one of the many GOP candidates for president, has put his foot in his mouth once again. On Tuesday, the retired neurosurgeon suggested that school teachers should have guns to protect their students in a USA Today interview, and it's not the first time Carson has given us some pretty ridiculous quotes on a wide variety of topics. In the wake of last week's mass shooting in Roseburg, Oregon, his remarks are a poor reflection of the state of gun control reform in America.

Carson continued by saying that "gun control only works for normal law abiding citizens, it doesn't work for crazies." Carson's medical background means that he has absolutely no excuse for using offensive language like "crazies" to describe people who have mental illness, and his career as a doctor should mean he is aware that the mentally ill are significantly more likely to be victims of violent crime than the perpetrator.

This isn't the first time that Carson has dropped some head-scratching quotes. In response to a question from a supporter during a Facebook Q&A on Monday, he insisted that he "never saw a body with bullet holes that was more devastating than taking away the right to arm ourselves." Way to disrespect the suffering of the 30,000 people who are killed annually by gun violence in the United States.

Although Carson has some very progressive ideas on medical marijuana use, vaccination, and raising the minimum wage, some of his conservative statements are so outlandish that they detract from his comparatively moderate platform. Since his political aspirations began in 2012, Carson has had no shortage of ridiculous things to say about his beliefs.

In this week's USA Today interview, Carson stated that his past experience as a neurosurgeon automatically qualifies him to run for president. "Neurosurgery is considerably more complicated than politics. You don't need to know nearly as much to be able to maneuver in the political world as you do in the operating room inside of somebody's brain." I don't think anyone is denying that brain surgery isn't extremely challenging and a testament to a person's work ethic, but Carson's ability to separate conjoined twins doesn't necessarily mean he has what it takes to be the president of the United States. It's kind of like saying I have writing experience so I'm qualified to drive an 18 wheeler. They're apples and oranges.

In his speech at the Conservative Political Action 2013 Conference, Carson was quoted saying, "The Bible endorses the idea [of a flat tax]. Everyone should tithe — give 10 percent — in good times and in bad." Maybe that would work if we still lived in biblical times, but we're dealing with a slightly more complex society than 2,000 years ago. If you want to take the religious argument (which you shouldn't because, you know, separation of church and state), the Bible also says, "Give to him who asks of you, and do not turn away from him who wants to borrow from you." Sounds more like a progressive tax to me.

In January 2014, Carson penned an op-ed for The Washington Times entitled "A Physician's View on the Sanctity of Life," and had this to say about abortion:

Most of us instinctively want to protect helpless creatures and sometimes go to great lengths to do so. The television commercials about abused animals are very poignant and as a society, we sometimes delay or cancel large construction projects to protect an "endangered" insect, amphibian or fish. Yet many of us turn a blind eye to the wanton slaughter of millions of helpless human babies who are much more sophisticated than some of the other creatures, when nothing is at stake other than the convenience of one or both parents. I am not saying that we should abandon our efforts to save baby seals and a host of other animals. Rather I am saying shouldn't we consider adding human fetuses and babies to the list?

First off, humans are definitely not an endangered species, so bad analogy, Ben. Second, if you want to completely ban abortion, maybe you should back that up with some actual concrete plans for policy change to overhaul the foster system? Just a thought.

On CNN's New Day, Carson said that "being gay is a choice" and he doesn't think gay people should be allowed to get married. "Why do gay people want to get married? Because they want to have various rights. Property rights, visitation rights ... why can't any two human beings, I don't care what their sexual orientation is, why can't they have the legal right to do those things?" This is definitely a step in the right direction, but I'm pretty sure LBGT people also want to get married to symbolize their love and commitment to one another in the socially traditional way. Also as a neurosurgeon, Dr. Carson should know that being gay is more nature than nurture.

A November 2014 interview with Bloomberg Politics went awry when Carson contradicted himself about how to tackle environmental sustainability. "There's always going to be either cooling or warming going on. As far as I'm concerned, that's irrelevant. What is relevant is that we have an obligation and responsibility to protect our environment." Yes!!! But no!!! If politicians don't accept that there's a huge global warming problem, we aren't going to fulfill that obligation and responsibility in time. It is relevant, Ben, it is!

From the liberal standpoint, Carson is a much more viable GOP candidate than the more right-wing candidates like Ted Cruz and Mike Huckabee. But Carson's missteps and shocking comments are still enough to give pause to progressives who are looking into Republican candidates. Whichever way you're leaning, the most important thing to do during election season is to inform yourself about what all the candidates have said about the issues, so you can make your most educated decision come next November.