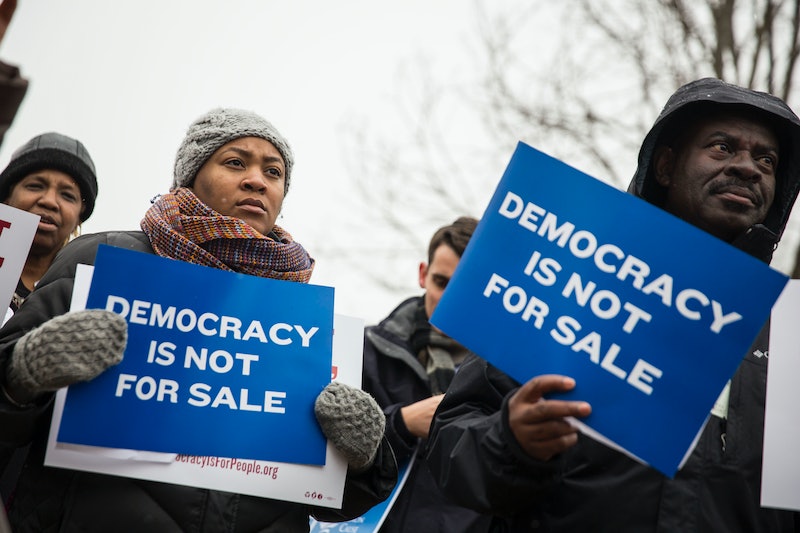 Don't be ashamed if you don't know exactly what a Super PAC is — according to a 2012 Pew Research poll, only 40 percent of people picked the right answer when given a choice between four options. Sure, super PACs make the news a lot, and yet not that many people know what they are. A lot of political terminology is thrown around by candidates and pundits during election seasons, and they aren't often well explained, so it's OK to need a little clarification about the definition and history of the term.

PAC stands for Political Action Committee, which is a political organization that represent special interests of private citizens. The Congress of Industrial Organizations, formed in 1944 to raise reelection funds for President Franklin D. Roosevelt, was considered the first American PAC. And until 2010, people were only allowed to contribute up to $2,500 per year, and corporations were completely restricted from donating.

In its essence, a Super PAC is a special interest group that can receive any amount of money from any source and spend any amount of money advertising for any politician. Although politicians are technically not allowed to coordinate with these groups directly or through their campaigns, the rules are lax and there are tons of loopholes. Priorities USA spent $66 million on President Obama's 2012 campaign and was run by his former deputy press secretary Bill Burton. Restore Our Future, which supported Mitt Romney in 2012, was run by Romney's former political director Carl Forti. That super PAC spent $142 million and mostly on attack ads.

So, how did we get here? It all began with the now infamous Citizens United SCOTUS decision spurred by Michael Moore's Fahrenheit 9/11, a documentary about George W. Bush's disastrous first term in office in the wake of the Sept. 11 attacks. The conservative PAC Citizens United accused the film of using trailer commercials as campaign ads that were unfairly and illegally prejudiced against Bush, who was, at the time, running for reelection. The Federal Elections Commission rejected the claim of illegality, so Citizens United retaliated with a movie of its own, attacking then-candidate Hillary Clinton. The FEC took Citizens United to court to stop the release of the movie, and the case made it all the way to the Supreme Court.

In January 2010, the Supreme Court decided that individuals, corporations, and unions could make unlimited donations to PACs. Two months later in a different ruling, the Court decided that "independent expenditure only" groups, aka the groups that make those awful campaign commercials for political candidates, were also allowed. And thus, the Super PAC was born.

It's not hard to see why there's a big problem with this set up. If the Koch Brothers follow through on their plan to spend $889 million on the 2016 election season, they are undoubtedly going to have a huge sway in the political arena. We can't pretend that donations of this massive scale aren't going to affect political interests — instead, we have to make it so no one person, or corporate, can donate that much in the first place.