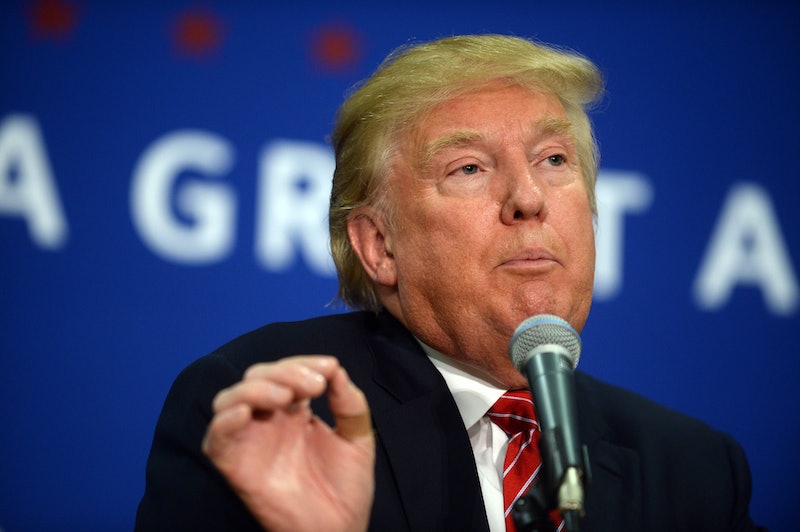 As we all know, Donald Trump has no trouble speaking his mind. But imagine this: what if you could take words out of a bunch of speeches he's made during this election season, and make Donald Trump say anything in his voice? Thanks to Phillip Pastore of Clash.me, who painstakingly did just that, all your election season dreams are about to be realized. For better or for worse, you can log onto his "Say It With Trump" audio experiment, type in whatever your heart desires, and hear it played back in Donald Trump's voice.

Of course, it's still in the beginning stages, so not everything is played in Trump's voice. But Pastore did not abandon us — nay, instead he has supplemented all the remaining words with either a Clash bot or with random snippets from songs. So when you say it with Trump, you might be getting a little help from your pals Jimmy Fallon and Carly Rae Jepsen. This oddly has made this all the more worthwhile to me.

I would like to take a moment to let everyone respect my hustle, because in demonstrating this thing's capabilities I not only had to make a Vine account, but also, y'know, figure out how the hell to film a Vine. I feel so Gen Z right now that it hurts. I DID THIS FOR YOU, AMERICA:

If anybody needs me, I'm going to be wasting my entire day coming up with other random things from Trump to say/sing. Clash.me isn't just limited to Trump-isms, of course. It features snippets from all kinds of songs and movies and TV shows, and if I have my way, it is going to replace normal human communication from here on out. To learn more about the project and how it works, watch the video below: