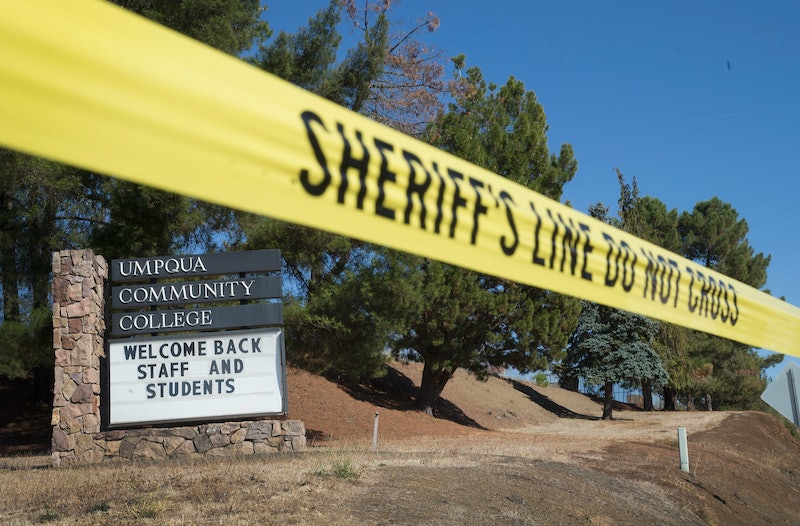 Laurel Harper, the mother of Oregon shooter Chris Harper-Mercer, authored online posts where she detailed her son's developmental condition, the family's views on gun control, and gave advice on certain medical conditions, according to The New York Times. In most of the online posts, which Harper published over the span of about 10 years, she describes herself as a nurse and gives internet users guidance on health issues, according to CNN. But in some of the other posts, Harper talks about "lame states" that impose limits on keeping loaded firearms in the home and professes pride for her son, whom she wrote had a deep knowledge of guns and gun laws, according to the Times.

Harper's views in the post seem to contrast sharply with those of her former husband Ian Mercer, who told CNN that the shooting would not have happened if their son hadn't had access to 14 guns. He said that other nations don't see mass shootings in numbers that even remotely compare to what the U.S. has seen recently, according to CNN: "Somebody has to ask the question: How is it so easy to get all these guns?"

But Harper doesn't agree. In Harper's online posts under the name "Tweety Bird," which the Times said traces back to her, to websites including Yahoo! Answers and NurseTogether, Harper seems proud of her gun knowledge and ownership, according to the Times:

I keep two full mags in my Glock case. And the ARs & AKs all have loaded mags. No one will be "dropping" by my house uninvited without acknowledgement.

Harper was apparently referring to a Glock handgun and two military-style rifles — three guns of this type and description were discovered by police later. Neighbors also told investigators that Harper and her son would go target shooting together, according to CBS News.

Harper also claimed that both she and her son had Asperger's syndrome, an autism spectrum disorder.

He's no babbling idiot nor is his life worthless. He's very intelligent and is working on a career in filmmaking. My 18 years worth of experience with and knowledge about Asperger's syndrome is paying off.

In some of her medical-related postings, Harper gives advice to people whose children are struggling with Asperger's or a similar condition. She suggested that parents of autistic infants read to them as often as possible and use expressive gestures, according to the Times:

Fact: Before my son was even born, I was reading out loud to him from Donald Trump's The Art of the Deal. And as for the "gesture effect," I was practically a mime. And now my son invests in the stock market along with me, turns a profit and is working on a degree in finance. His language and reading skills are phenomenal. I tell you this because it's not too late for you to start helping your daughter.

Harper-Mercer left a note behind that was found by investigators shortly after the shooting, according to CBS. In it, he "obsesses" about his place in the world. Posts to an online blog that appears to belong to Harper-Mercer reference multiple shootings, including a recent shooting in Virginia where disgruntled former WDBJ7 employee Vester Flanagan shot and killed a news reporter and a cameraman, according to CBS News:

I have noticed that so many people like [Flanagan] are alone and unknown, yet when they spill a little blood, the whole world knows who they are. A man who was known by no one, is now known by everyone. His face splashed across every screen, his name across the lips of every person on the planet, all in the course of one day. Seems like the more people you kill, the more you're in the limelight.

Harper-Mercer's motive is still unclear, and no one has been able to reach his mother since her online postings have been discovered, according to the Times.