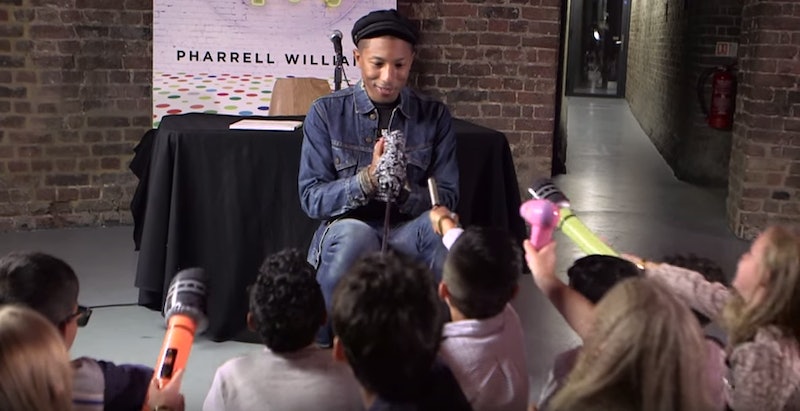 I hope you took advantage of that recent Amazon Prime sale, because your kid's favorite song, "Happy" by Pharrell Williams, is now a children's book. The book features bright, cheerful photographs of children, overlaid with the lyrics to his Grammy Award-winning song. And to kick off its arrival in book stores, a video hit YouTube yesterday in which Pharrell attends a press conference run by British children — super adorable, totally hilarious British children. Spoiler alert: It's kind of the best.

If you're wondering what Pharrell and a room full of pint-sized reporters have to say to each other ... well, apparently, a lot. In the clip, the singer starts off by playfully mocking their British accents, and answers some softball questions about his favorite song and favorite book. Things get interesting when the question of pets comes up. Pharrell tells the kids a tale about a family of five raccoons that have taken to crossing his lawn every night, and coming up to knock on his window. "I'd like to think that they're our pets," he says, "but I'm sure that in their minds, they're thinking, 'Get off of our land. We were here first.' So I think we're their pets."

One boy, who was clearly coached into divulging some TMI deets about his parents' reading habits, next asks Williams whether he would read Happy on the toilet or in bed. (A pretty question I'm sure you were wondering, too.) "I suppose you should read it wherever it makes you the most happiest," the author responds. That's called grace under pressure, folks.

So why write a kids book? Says Williams:

I'm still a big kid, and I don't want to lose that ... You have to continue to give back to whats given you so much, which are the kids. You guys have given me so much. My life would not be what it is right now if it weren't for you guys ... That's why I wanted to do it.

As for the most important question of all – does he still have that hat? – Williams reveals that he donated it to charity. "Good on you!" pipes up a charming little boy. Good on you, indeed.

I'm starting to think that Pharrell really missed his calling as an elementary school teacher. This isn't the first time he's been an awesome role model for kids. Back in March 2014, word got around about nine-year-old Damon Billeck, had been diagnosed with an aggressive form of bone cancer that was threatening to take his arm. To keep his spirits up, Damon would play "Happy" over and over on a loop. When the story reached the singer, Williams recorded a sweet video message for Damon, urging him to never give up hope. "The past, you can't change," he said. "And the future, you can only contemplate. But the present, it's malleable. That's why it's a gift; because you can do whatever it is that you want with it." Damon's father, Brian, later told HuffPost Live that the whole family cried when they watched it.

Keep on spreading the love, Pharrell. The world needs more positive people like you.