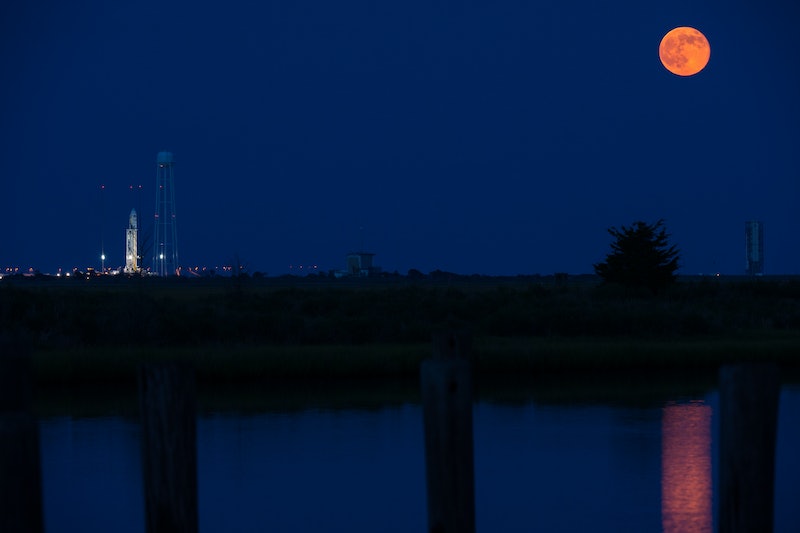 Over the past few months, we've all been treated to a number of interesting, exciting celestial sights. Whether its a blue moon, a meteor shower, or a once-every-few-decades blood supermoon eclipse, it's been a pretty fun year for anyone who enjoys tilting their heads up towards the night sky. But now, a new, entirely human-made sight with be lighting up the skies along parts of the eastern seaboard. NASA is releasing brightly-colored vapor clouds into the night sky on Wednesday as part of a suborbital rocket launch that's scheduled to go down at some point between 7:00 p.m. and 9:00 p.m. ET.

As expertly detailed by Gawker's Dennis Mersereau, your ability to actually see this very cool sight is sadly not assured. If you're not along the East Coast, for starters, you're flat out of luck. The suborbital rocket will be releasing the vapor — which, according to NASA, is made up of "four sub-payloads with mixtures of barium and strontium" — hundreds of miles above the Earth's surface, after the rocket blasts off from the Wallops Flight Center at Wallops Island, Virginia. Needless to say, you're not going to be able to see a thing if you live very far inland, much less in the Midwest or on the West Coast.

The circles above demonstrate how far out you might be able to see it in the skies naturally. But you can watch along with the experiment wherever you are, thanks to a handy Ustream feed straight from the Wallops Flight Center. It's scheduled to go live at 6:00 p.m. ET, about one hour before the suborbital rocket launch is meant to get underway. Needless to say, if you're the sort of person who was checking in with Slooh's great livestreams during the recent supermoon and blue moon, this is probably right up your alley. It's not a function of the natural world, obviously, but it's nonetheless sure to be a breathtaking sight.

And besides, whenever you can enjoy watching something that would freak out an unwitting, unprepared conspiracy theorist, you're on the right track. And colorful, glowing vapor clouds seem like a safe bet to do just that. That might be why NASA's press release about the launch is careful to note that the vapors won't pose any risk to human health.

The amount of barium and strontium used in the test is much smaller than that used in a typical July 4 fireworks display and poses no hazard to the community.

Obviously, that safety assurance might not assuage the fears of any dedicated conspiracy theorists out there — the kind of people who're planning to huff colloidal silver in the event of biological warfare, for example — but for all of you level-headed folks, it ought to ease any concerns.