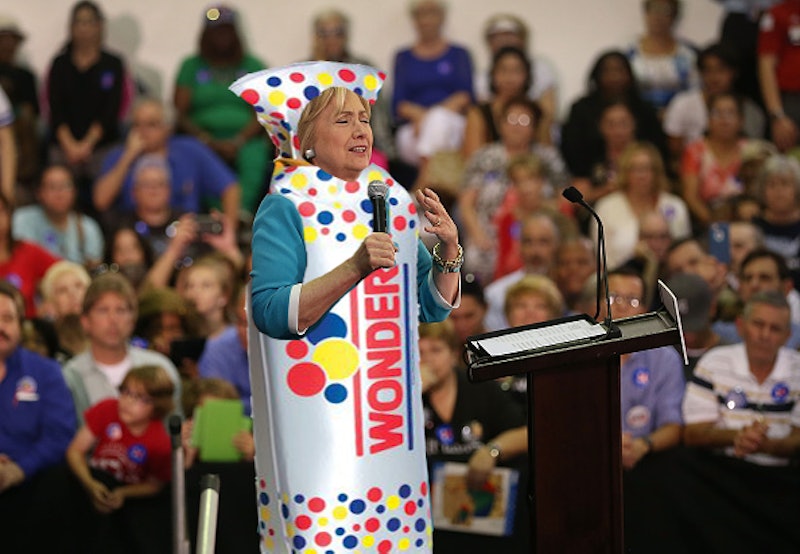 Whether or not you're "ready for Hillary," you should definitely be ready for these awesome pun-inspired Hillary Clinton Halloween costumes. You can practically guarantee that there will be a plethora of costumes related to the 2016 presidential election this year, so you'll have to get creative if you want yours to be memorable. Sure, you could throw on a Donald Trump wig and call it a day, but why not do something more original? The eight option in this punny list will have everyone's eyes on you at whatever Halloween party you go to this month.

Of course, the costume will be more complete if you adopt a few aspects of the former Secretary of State's persona, too. To truly emulate Democratic presidential hopeful Hillary Clinton, you'll need to be very secretive and off-putting about your use of a private email server, and you'll need to become an expert in rolling your eyes at each mention of Benghazi. Bonus points if you can throw in a few jabs about Bill Clinton, too. You probably won't be the only person dressed up as Hillary Clinton at your Halloween party, but if you can talk the talk and walk the walk, yours will be the Clinton costume to go down in infamy.

A phrase conjured by Clinton's 2016 campaign store, Chillary totally goes with the infamous "Texts from Hillary" meme; how much chiller could Clinton be than when she's wearing sunglasses and texting? Here are the essentials you'll need to complete the look.

Step 1: Flatiron your hair with the ends flipped out.

We all had dolls whose hair did this; Clinton's couldn't be more perfect in the photo if she tried. It's a refreshing change from her usual hairstyles, though, and it adds to the sassiness of the costume.

If you've already got a blazer and dress pants, there's no need to buy anything fancy. But if you don't own many professional clothing items, this could be a great time to invest in your future, beyond the Halloween costume.

Step 3: Add on the perfect pair of sunglasses.

No "Chillary Clinton" look would be complete without the requisite shades. Bonus points if you pull out your phone and frown at it for a solid few minutes. This pair of sunglasses from H&M is just $7.95, and the shape is pretty close to the frames Clinton sported in the now-infamous photo.

The turquoise brooch is the star of Clinton's photo, but you don't have to perfectly replicate it for your costume. Any large pin your grandma or mom might have lying around works just fine, or you could pick up a costume pin from your local Halloween store.

This koozie will take your costume to the next level and illustrate the pun. And the koozies are on a two-for-$5 sale at Clinton's campaign website, so you might be able to convince a friend to join you in the "Chillary Clinton" costume, too.

We also can't take credit for coming up with this pun — Hillary Clinton's campaign website offers "Grillary Clinton" aprons and spatulas for sale. But there's no reason you can't slick your hair back and add a Hilary Clinton pantsuit to the spatula and apron. Plus, you'll have some handy grilling tools when next summer rolls around. As a finishing touch to the pantsuit/grilling tools look, add on a Hillary 2016 pin.

This costume is toeing the line between funny and just-plain-bad puns, but if you can't make a groan-worthy joke on Halloween, when can you make it? The play on Clinton's campaign slogan, "Ready for Hillary," is also a great costume if you want to go as something Clinton-related but aren't keen on wearing a pantsuit.

Step 2: Make a "Ready for Hillary" sign on a piece of poster board.

A Hillary 2016 pin would blend into the costume pattern, but a large sign will make it clear to everyone what your costume is.

4. The Case For Hillary

This is another great pun courtesy of the Hillary Clinton campaign store, but you should only use this costume if you're a genuine Clinton supporter. Once you tell everyone you're making the "case for Hillary," you'll be bombarded with questions about just why, exactly, the former secretary of state should be the next U.S. president.

To make the "case for Hillary" costume, you could put a Hillary 2016 sticker (or phone case) onto your phone and hold it out, while sporting a pantsuit. Or, if you're feeling ambitious, you could always paint a cardboard replica of the Clinton 2016 iPhone case for yourself to wear.

Why should Jeb Bush get all the weed jokes this Halloween? Clinton may not have made any explicit comments about smoking weed in her past, but that doesn't mean you can't make the obvious joke based on her name. The former first lady has said she wants to see how marijuana legalization performs at the state level before declaring an official stance, and even though she says she didn't smoke marijuana at Wellesley, there's no reason you can't stretch the facts with this Halloween costume.

Anything left over from your parents' school years — or found at Goodwill — would work. There's no need to spend a lot of money recreating Clinton's college look; the point is to emphasize that you're '70s-era Clinton.

Clinton's round glasses are a staple of the time, and you'll also be able to reuse them for a future Halloween as Elton John or John Lennon.

This is essential to the joke. It's up to you whether you want to buy your own or go with this "big smoke" fake joint, which is going for $5.02 on Amazon.

This costume is best if you're not a fan of Clinton — people will likely assume that you find her presidential candidacy "hilarious." If you aren't a Clinton supporter, you can make this costume as unflattering as possible, with an ugly pantsuit and a frightening mask.

The features are so distorted, the people who aren't freaked out by your mask will definitely find it funny.

Step 2: Throw on the most unflattering pantsuit you can find.

If you're going for the comic factor, you don't want to be dressed well; an ill-fitting, two color pantsuit from a thrift shop or borrowed from a male friend will do nicely.

Step 3: Don't forget to laugh — and tell plenty of jokes at Clinton's expense!

This costume, too, is best for those who aren't "ready for Hillary." If you're one of the people who believes the Clintons are too similar and don't want another Clinton presidency, this costume is perfect for you. Are you Hillary? Are you Bill? If you don't like either of them, this costume is sure to be a hit.

The more distorted, the better — you want to make sure everyone knows you've got Bill's face.

Step 2: Add a "Ready for Hillary" pin to your pantsuit.

Make sure to wear a fitted blazer and pants, to let people know you're dressed up as a female — you don't want everyone thinking you're just dressed up as a former president who's supportive of his wife's ambitions.

Okay, so this isn't technically a Halloween costume, but your friends will definitely still think it's clever. Put a spin on Hillary Clinton's use of a private email server by donning Hillary Clinton-inspired nail art that resembles computer hardware. It's awesome-looking nail art that has a deeper pun attached.