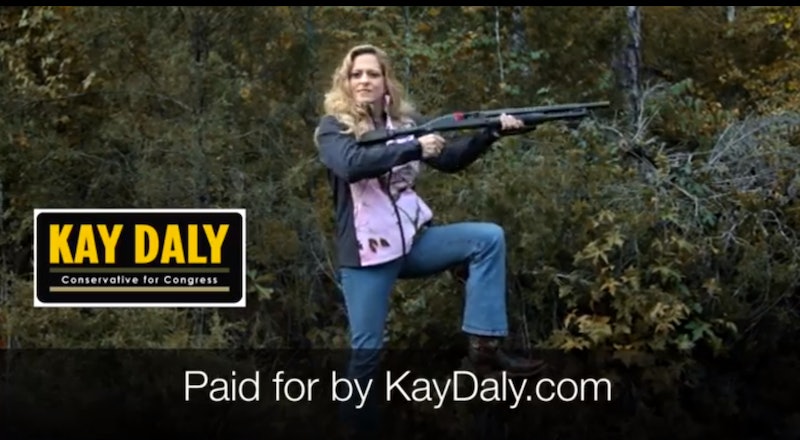 The next congressional primary election for members of the North Carolina GOP isn't until March, but candidate Kay Daly is wasting no time throwing her hat into the ring. Back in September, Daly posted a conversation-worthy ad to her campaign YouTube account called "'RINO Renee' Ellmers." The ad attacked Daly's competition, incumbent Rep. Renee Ellmers, and Daly's campaign ad for North Carolina Senate is either really effective or the worst thing ever.

Ellmers has held her seat as representative of North Carolina's 2nd district since she first won election in 2010, when she edged out the Democratic incumbent. Since then, she has easily won both primaries and general elections, mostly recently against Democratic candidate and former American Idol contestant Clay Aiken in 2014. A nurse by trade, Ellmers proudly campaigns on her opposition to the Affordable Care Act, as well as other conservative values like opposition to abortion and immigration reform.

For her part, Daly has never held public office, although she's been entrenched in conservative politics for much of her professional life. She previously served as a spokesperson, congressional aide, and campaign adviser for the North Carolina Republican Party, according to her campaign website. In challenging Ellmers, Daly is hoping to do what no one in the three elections before her has been able to do, and she's taking all the shots she can get. Decide for yourself if her controversial campaign ad is setting her up for a big win or a big fail.

As if the picture of Ellmers wasn't ridiculous enough, it's the voice-over that goes along with this frame that makes it utterly cringeworthy. A man's voice says, "This feminist voted to cut veterans' benefits and to gut the military budget." Since when did being a feminist turn into a bad thing? I thought we had moved past that. Google, Politico, and Renee Ellmers are right: Women rule.

I don't even really have words for this photo, nor do I understand what Daly is trying to say by using such a photo of Ellmers. Should we congratulate her for digging up the most awkward selfie that exists of the opponent and using it against her? Isn't that the kind of politics that Americans hate?

Oh, look, another awkward selfie. (There are actually four in a row in this ad, to be exact.) As this one appears on the screen, the voice-over says Ellmers voted to "fund Planned Butcherhood." What's interesting, though, is that the issue of abortions and Planned Parenthood could be Ellmers' most vulnerable spot leading up to the primary. She recently switched course on her party before a crucial vote on abortions after 20 weeks, and she has received a lot of backlash from conservatives in her state and across the country as a result.

This might be the most laughable part of the ad. It shows this clip of Ellmers finger-quoting and saying "RINO" three times (aka "RINO, RINO, RINO"). I'm guessing it's for dramatic effect, but it comes off a little silly. The RINO (Republican In Name Only) attack is clearly something Daly is going to stick with, however, as she's already begun tweeting with #RINORenee and #retireRINORenee.

At the end of the video, Daly fires a shot from a shotgun and says, "I'm hunting RINOs. Care to join me?" I'll give her creativity points for making use of the double entendre, but part of me is scared for Ellmers' safety.

In reality, it might take something this bold to unseat Ellmers from the position that she has won three times and easily at least twice. That doesn't make it a good or appropriate ad, though. Either way, shots have been fired (literally) and, personally, I hope Ellmers fires back with a little more class.