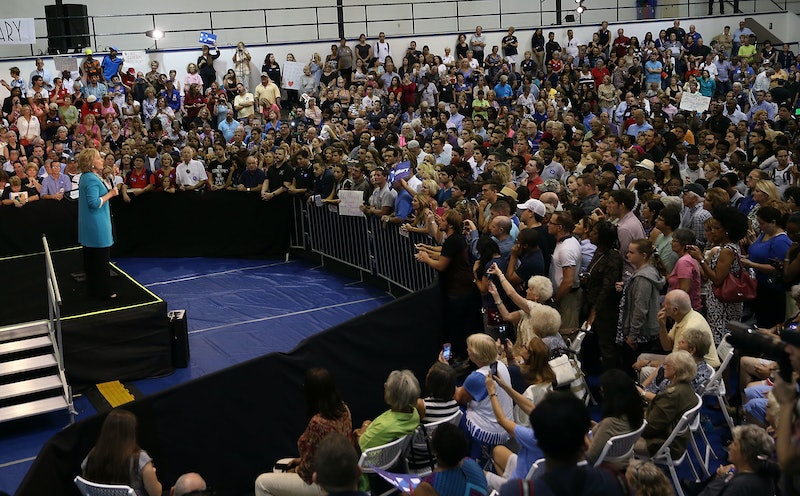 The first Democratic debate is on Tuesday, with CNN sponsoring yet another 2016 presidential primary showdown. Dana Bash will return after having served as a moderator at the second GOP debate. Anderson Cooper will lead the questioning, joined by Juan Carlos Lopez and the returning Dana Bash, to ask Hillary Clinton, Bernie Sanders, Lincoln Chafee, Martin O'Malley, and Jim Webb about hot button issues like immigration, healthcare, and the environment. Though two Republican debates have already occurred, Tuesday's event at the Wynn Las Vegas marks the Democrats' inaugural debate. So, how many Democratic debates are there this election cycle? Surprisingly, far less than their Republican counterparts.

While a full 11 debates will occur on the Republican side, including three in the month of February alone, Democrats have just six chances to make their public case for who should nab the presidential nomination. That number is down from the nine Democratic primary debates that were held during the 2008 election. This marked decrease has frustrated left-wing supporters immensely. In a brief op-ed on liberal publication The Nation, the site's staff urged voters to sign a RootsAction petition requesting that additional debates be added. As of this writing, the petition has exceeded its goal of 20,000 signatures by more than 1,000. Additionally, NextGen Climate has issued a memo to CNN, calling for an extra Democratic debate specifically to address the issue of climate change.

Even Democratic candidates themselves have voiced complaints against the DNC for their limited debate schedule. According to The New York Times, both Sanders and O'Malley have requested that more debates be added. O'Malley campaign manager Dave Hamrick called for an additional five debates, making for a full 11 rounds — the same number that the RNC currently has scheduled for Republican candidates. In a letter to campaign managers of the other Dems, he said:

By limiting the number of debates Democrats hold this year, the DNC is allowing the Republican presidential candidates — namely, Donald Trump — to dominate the national debate, and whoever our nominee is will emerge stronger as the result of a vigorous debate process. Specifically, we are asking for two additional weeknight, non-holiday peak season debates in Iowa and New Hampshire respectively, and one additional weeknight, non-holiday peak season debate in South Carolina and Nevada, respectively.

The current Democratic debate schedule has candidates facing each other for the first time on Thursday, followed by a second debate a full month later on Nov. 14 at Drake University in Iowa. The Democrats' last debate of the year will be held Dec. 19 in Charleston, with debates picking back up again in January. Dates for the final two Democratic primary debates have yet to be determined, though both are expected to occur in either February or March.