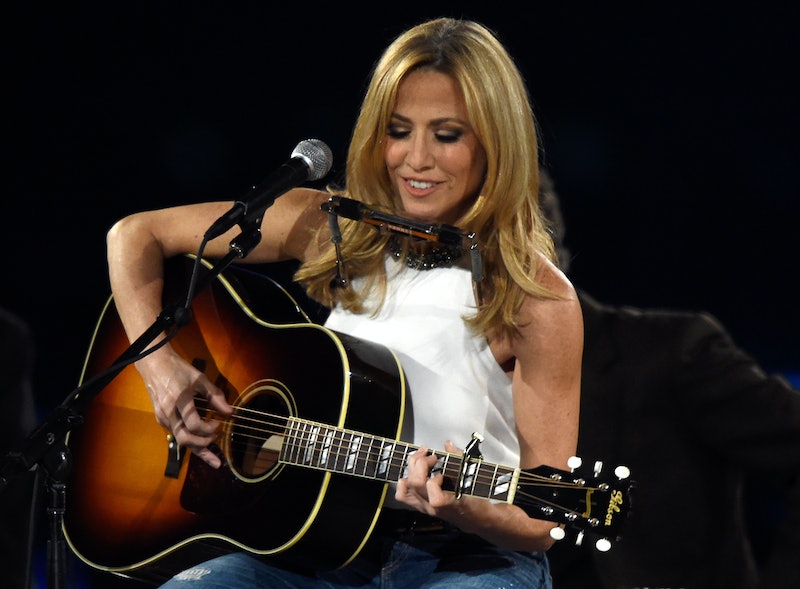 On Wednesday, CNN announced Sheryl Crow will be at the Democratic primary debate on Oct. 13 in Las Vegas, Nevada. Crow, a widely recognized Democrat, won't be taking the stage to debate, however. Instead, she'll be performing as the opening act and will sing the national anthem.

The announcement that a Grammy Award-winning singer is joining the debate lineup may have surprised some, considering that the previous two Republican primary debates have not been star-studded events and traditionally aren't considered "entertainment." But without Donald Trump on stage, CNN may be looking to boost ratings by adding some sort of novelty to the event. After all, the Republicans got Ronald Reagan's plane, so I guess the Democrats get Crow.

For her part, however, Crow is excited for the opportunity. As a vocal supporter of the environment and green causes, Crow told CNN she looks forward to a robust discussion of the topic on Tuesday. "To me that's the mother topic," Crow said. "All else fails if our planet isn't healthy." Although the subject was virtually ignored at the previous two Republican debates, it's sure to be a large source of discussion among the Democratic candidates. According to CNN, Crow hasn't decided who she'll support yet, and wants to wait to see how the candidates fare during the debate.

Also present on stage will be Democratic frontrunner Hillary Clinton, as well as Vermont Sen. Bernie Sanders. But this time around there will be no kiddie table debate for the lesser known candidates, which means that former Maryland Gov. Martin O'Malley, former Virginia Sen. Jim Webb, and former Rhode Island Gov. Lincoln Chafee will be able to participate in the primetime debate. The lack of an opening debate may have also been what spurred CNN to bring in Crow, who can function as a sort of precursor to the main event

The only person who won't be there, however, is Vice President Joe Biden, who is expected to skip the debate. Although many had assumed Biden would have decided whether or not to run for president by the end of summer, he appears to have stretched out his time table. According to CNN, people close to Biden say he feels no pressure to decide at this point.

Currently, CNN's Political Prediction Market estimates there is a 90 percent chance that Biden will announce a run — but if he does, it won't be until later this month, after the first debate. However, the debate rules do allow him to enter the day of, which means America cannot rule out a surprise Biden appearance.

Despite her best efforts, Crow may not be able to make the Democratic debate as entertaining as the Republican ones, but Tuesday's event at least has one thing going for it: it will definitely be nowhere as long as the last CNN debate.