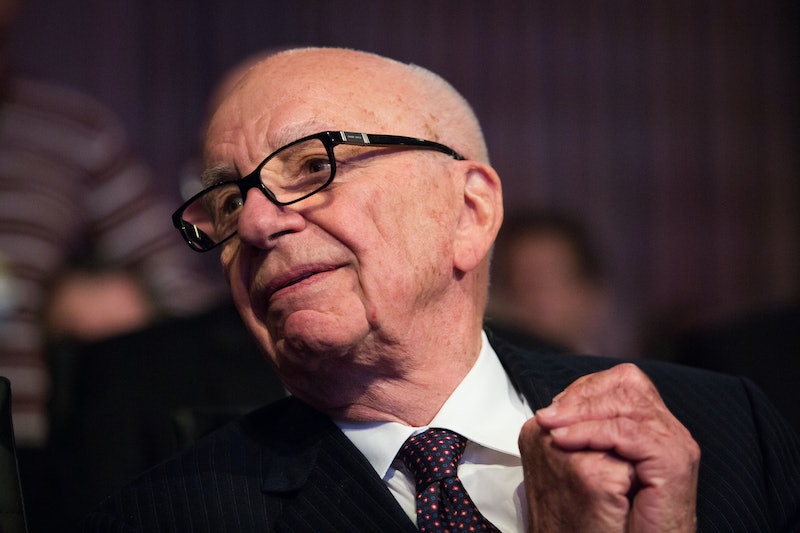 On Wednesday evening, while tweeting out his support for Republican candidate Ben Carson, media mogul Rupert Murdoch insinuated that Carson would be a "real black president" — the clear insinuation in this context being that current President Barack Obama is not. Murdoch, the owner of Fox News, has been vocal about his support for Carson over the past few weeks, since the neurosurgeon's rise in the polls following the first debate. "Ben and Candy Carson terrific," Wednesday night's tweet read. "What about a real black President who can properly address the racial divide? And much else."

But although Murdoch's tweet was supposed to be an endorsement of his favorite candidate, the heavy connotations are difficult to ignore. And the intent isn't clear. Was he referencing the fact that Obama is biracial? Or was he speaking on behalf of the African American community in saying that Obama had failed to champion their causes?

According to Murdoch, it was the latter point. He quickly followed up his original tweet by directing his Twitter followers to an (unlinked) New York magazine article discussing Obama's efforts for the African American community, which apparently gives credence to Murdoch's "real black president" comment. But there are still a lot of unanswered questions.

First and foremost, what gives Murdoch, a white man, the authority to judge Obama's blackness? What is the scale for being black enough? Is there a proper checklist that all African American politicians need to work off of in order to attain the proper certification of a "real black" politician? Is it possible to be a "real white" president? Why does a president need to be black in order to address the racial divide? Why did race need to play a part in this at all? And more importantly, what specifically is it about Carson that makes Murdoch so confident that he will be better for the African American community?

So far, Carson has been pretty quiet on the topic of race, something that a media mogul like Murdoch should have realized. Wasn't he watching during the first Republican debate when Carson covered this?

Which is a very nice sentiment and highly agreeable, but Carson is also the individual who said that the Black Lives Matter activists are "creating strife." And while he says the country needs to work together and listen to each other in order to heal the racial divide, he doesn't offer much else in the way of explanation. Thus far, very little of his campaign rhetoric has established why or how he would be a "real black president."

But the root of the situation comes back to the main question: why does Murdoch feel that he has the authority to comment on these matters? For members of the black community heading to the voting booths next year, it's valid for them to wonder whether the only African American candidate will represent their interests. But it's a question that Murdoch has the privilege of not having to worry about.