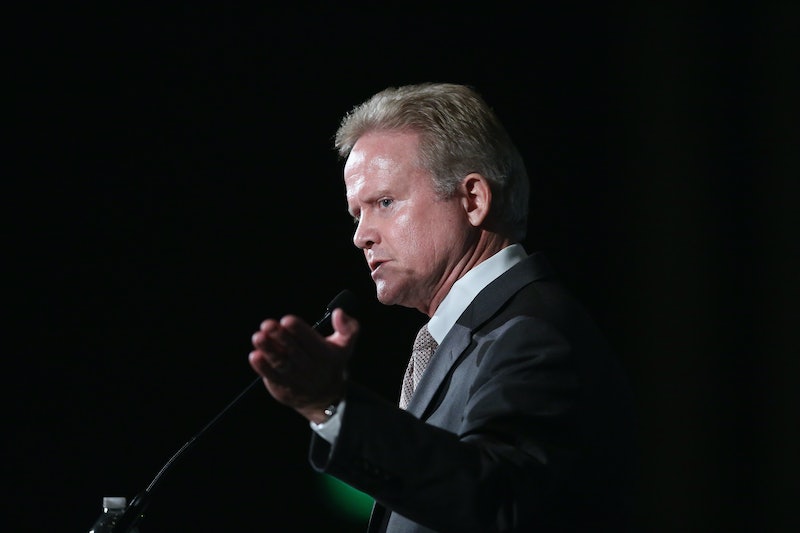 The first Democratic debate is almost upon us. Tuesday's primetime event marks the best chance for candidates to not only set themselves apart from the pack, but also make their case as to why they should be president of the United States. Frontrunner Hillary Clinton has been a household name for years, and Bernie Sanders has been the surprise success in the months since he's announced his candidacy. But fellow contenders Lincoln Chafee, Martin O'Malley, and Jim Webb are still relative unknowns. In a recent Quinnipiac University poll, it appears that Webb is the most well-known of the three, though as many as 77 percent of voters polled are still unsure who he is exactly. These seven interesting facts about Jim Webb may help fill in the gaps, however.

It turns out that Webb boasts some seriously impressive accomplishments beyond his veterans rights advocacy. Most recently, Webb served as a Virginia senator from 2007 to 2013. He famously delivered a biting rebuttal to President Bush's 2007 State of the Union address and made headlines following the speech for his consistent opposition of the Iraq War as well as his rather strained relationship with Bush. Such an outspoken style of oration could certainly put Webb at a major advantage when facing off against other Democratic presidential candidates on Thursday.

1. He Was The First Assistant Secretary Of Defense

Webb first began his political career in an entirely new position created by then-President Ronald Reagan in 1984. He was appointed as assistant secretary of defense (research and technology) and served in that position for three years before moving onto the position of navy secretary.

Just one year before serving under Reagan, Webb was putting his military expertise to an entirely different use in a segment on U.S. involvement in the Beirut civil war for PBS' MacNeil/Lehrer NewsHour. That 1983 video essay would go on to earn the Democratic presidential hopeful a News and Documentary Emmy.

3. He Wrote Rules Of Engagement

No, not the TV show. Webb entertained audiences in a different fashion, penning the screenplay for the 2000 war movie. Rules of Engagement was largely panned by critics but went onto earn $71 million at the box office.

4. He Wore His Son's Combat Boots During His 2006 Campaign

In a moving tribute to his son Jimmy, who served in Iraq, Webb wore a pair of his combat boots during his entire 2006 Senate campaign. Webb said the decision came as a way to both put himself in his son's shoes and keep the concerns of veterans everywhere fresh in his mind. Following his victory, he retired the boots and put them in his office under a glass display case as yet another reminder of just how near and dear veterans issues are to him.

In addition to his screenplay work, Webb has written nine books. His 1978 novel chronicling the soldier experience in the Vietnam war, Fields of Fire, earned him massive acclaim from military personnel as well as literary critics.

Webb's book Born Fighting was adapted into a Smithsonian two-part special that he directed and narrated. Born Fighting chronicles the impact and influence of Scots-Irish immigrants on the country. Given Webb's ethnic background as a proud Scots-Irishman, the book and its accompanying documentary are impassioned and surprisingly personal accounts.

Unsurprisingly, Webb is an avid reader and has chronicled his love of books by way of book reviews on his personal website. Webb even had a chance to review five books for The Wall Street Journal as part of their 2006 Memorial Day coverage.