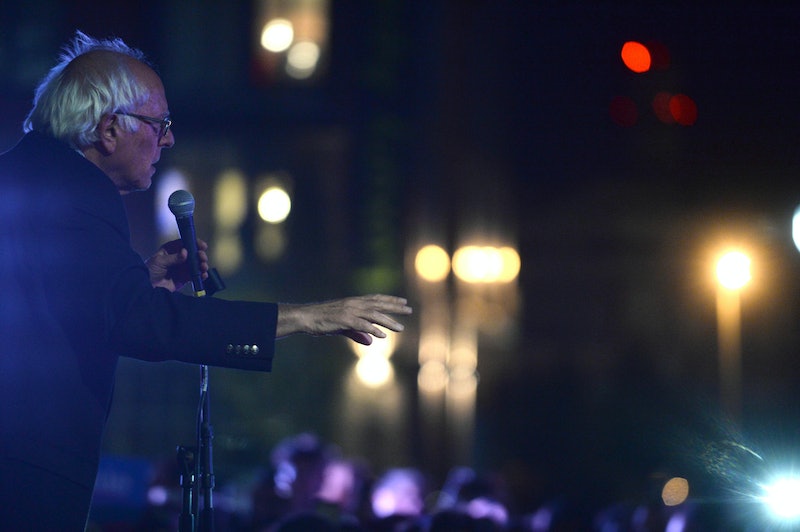 We're less than a week away from the first Democratic primary debate and there's no question that the Republican candidates will be a tough act to follow. After two debates and months of media dominance, the 15 GOP candidates for president have told voters exactly where they stand on major issues — even when those opinions sometimes proved questionable. But, as we near the first head-to-head debate between liberal candidates, it's important to remember that the Democrats have made some significant missteps themselves. To help refresh your memory before next Tuesday's debate, we've unearthed some of the biggest gaffes by Democrats in the 2016 election.

There is a good reason why it might seem like the Republican candidates have the market cornered when it comes to political gaffes. The list of GOP contenders is nearly double that of the Democrats — and the Republicans have the ultimate quote machine: Donald Trump. As the Republicans compete against each other (and Trump) for media coverage and voter support, there are simply more opportunities for a political misstep. But even with half the number of contenders — and perhaps less than half of the public sniping — the Democrats have managed to make some serious errors heading into their first primary debate.

For a few, the error might be the only thing that voters remember about their candidacy. And for others, overcoming the gaffe is an ongoing headache for their campaigns. But make no mistake, the Democratic candidates have their own political gaffes to recover from. Here are four of the most cringe-worthy comments we've heard so far this cycle.

Former Rhode Island senator and governor Lincoln is still in the race for the Democratic nod, though he's been absent from the national stage nearly since the moment he announced his candidacy. During his announcement speech, the Republican-turned-Democrat made the interesting argument that the U.S. should adopt the metric system in order to cultivate international relations.

Chaffee hasn't made much of an impact with voters; According to a recent Boston Globe profile, Chaffee continues to hover at 0 to 1 percent of voter support.

Hillary Clinton: "I'm Sorry This Has Been So Confusing To People."

No issue has been more problematic for the Clinton campaign than the swirl of controversy surrounding the Democratic frontrunner's use of a private email server while she served as head of the State Department. Clinton served as Secretary of State from 2009 to 2013, but never used the official "state.gov" email for her correspondence. Eventually, Clinton admitted she'd made a mistake in opting out of the official system, but not before she committed several missteps in addressing the issue in the media.

In an interview with The Associated Press in early September, Clinton offered no apologies for the decision, saying that she did "what I was allowed to do" under official policy. Then, speaking to NBC's Andrea Mitchell, Clinton said that she regretted the confusion over her decision, but admitted no wrongdoing:

At the end of the day, I am sorry that this has been confusing to people and has raised a lot of questions, but there are answers to all these questions. And I take responsibility and it wasn't the best choice.

But I am very confident that by the time this campaign has run its course, people will know that what I have been saying is accurate.

Nearly every presidential candidate — Republican and Democrat — stumbled this summer under pressure to address racial violence and police brutality in African American communities. Rather than directly addressing those issues, Hillary Clinton and Martin O'Malley both made comments that seemed dismissive, earning them serious criticism: Netroots Nation attendees booed O'Malley for responding to BLM protesters by saying that "all lives matter;" Clinton made the same tone-deaf statement while speaking at a historic black church in Ferguson, Missouri.

Despite a history of civil rights activism, Sanders was criticized for not addressing issues of race in his political platform, choosing to talk about economic inequality rather than systemic racism. Black Lives Matter activists interrupted Sanders' appearances several times over the summer, and each time the presidential hopeful avoided addressing their concerns head-on. Speaking to The New Yorker's Margaret Tolbot, Sanders had this to say about his encounters with Black Lives Matter activists this summer:

I plead guilty — I should have been more sensitive at the beginning of this campaign to talk about this issue. The issues these young people raised are enormously important.

Bernie Sanders has no problem saying what he thinks. It's one of the traits voters love about him, and it has helped him earn the second-place spot among the Democratic Party contenders. But, there's a downside to saying exactly what's on your mind, as Sanders saw this spring when he tried to explain to ABC's This Week host George Stephanopolis how a Sanders presidency would address economic inequality. Sanders said that the U.S. could benefit from modeling its health care and education policies after those that are working in Norway, Sweden, and Denmark. When Stephanopolis pointed out that Sanders might draw fire from other candidates for going against American exceptionalism, the democratic candidate doubled down on his statements:

After the racially-motivated mass murder of nine parishoners in Charleston, South Carolina earlier this year, calls for the state to remove the Confederate flag from official buildings and monuments came to a head. Former Virginia senator Jim Webb had trouble denouncing the flag outright, as we saw in the statement Webb made on his Facebook page defending the flag's "complicated history:"

This is an emotional time and we all need to think through these issues with a care that recognizes the need for change but also respects the complicated history of the Civil War. The Confederate Battle Flag has wrongly been used for racist and other purposes in recent decades. It should not be used in any way as a political symbol that divides us.