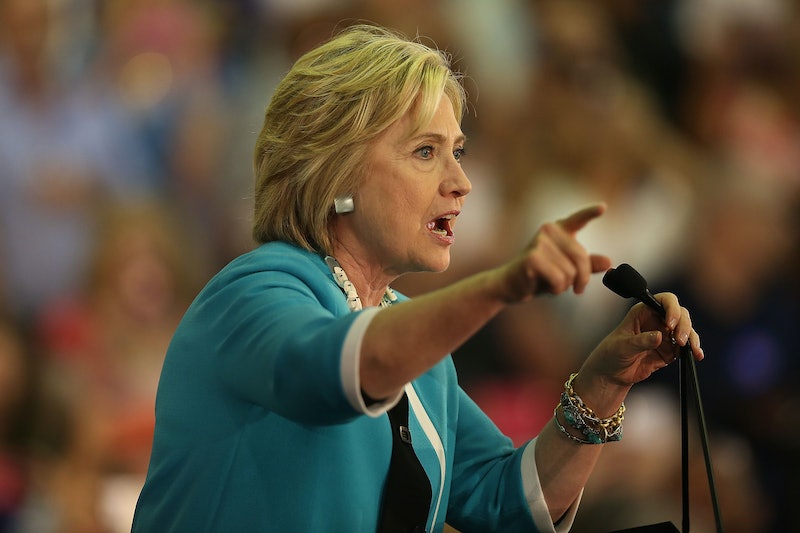 Vermont Sen. Bernie Sanders is slowly closing his gap on 2016 Democratic frontrunner and former Secretary of State Hillary Clinton. He's fundraising just as much money and he's leading in a number of state polls, according to CNN. He will have to distinguish himself from her during Tuesday's first Democratic debate in Las Vegas, but he told CNN that he wouldn't fight dirty or pull personal attacks. After all, Clinton and Sanders have a relationship that goes back 20 years. How do Clinton and Sanders know each other exactly? Sanders has been attempting to pull Clinton away from her husband's policies since the '90s.

Sanders was one of Congress' most liberal members in the 1990s, so he often clashed with former President Bill Clinton's interventionist mindset, according to Politico. To see if he could help Democrats' more centrist agendas, he decided to try to pull the then-First Lady further to the left. In 1992, he sent her a personal letter touting a bill he wrote to provide federal funding for state cancer registries, according to Politico. Then, for the next few years, Sanders fought Clinton on healthcare issues. He scheduled meetings with her, opposed her husband's plans, and then, occasionally, the two worked together on important healthcare legislation.

Sanders was vocally opposed to the House’s impeachment of Bill in 1998, saying “while the president has behaved shamefully and deplorably, his actions do not rise to the level of an impeachable offense,” according to Politico. But, regardless of how hard he's pushed, Clinton has always opposed him on healthcare. Despite this, those close to Sanders say he's always been impressed with both of the Clintons' intelligence.

“Maybe I shouldn’t say this: I like Hillary Clinton,” Sanders said on CNN last month, according to Politico. Huck Gutman, an adviser to Sanders in the early ’90s, called Clinton and Sanders “modest friends,” while Ralph Nader called their relationship more of a "mutual accommodation," according to Politico.

While Clinton brought in a Washington lawyer to mimic Sanders and her top policy staffer to act as former Maryland Gov. Martin O'Malley in order to help her prep for the debate, Sanders said he's taking a more relaxed approach. He planned to address policy and identify where he and Clinton differ the most — on areas like foreign policy and how they're going to reform Wall Street, according to Politico. On Wednesday, Sanders said he had no plans to attack any of the candidates or give rehearsed answers to questions. Instead, Sanders said he was just going to be himself as he stood against Clinton, who his campaign team hopes will come off as less genuine next to Sanders, according to Politico:

After all, it's his genuine style and bravado that has crept him within single digits of Clinton in polls in Iowa and New Hampshire, according to CNN. Liliana Montiel, a 22-year-old student at Wichita State in Kansas, told CNN that she was a long-time Clinton supporter before she started backing Sanders:

But Bernie's policies resonate with me more. And, man, he's got the guts. He's going after corporate America, which I haven't seen in my lifetime, in my generation. He's definitely won me over, 100%."

Sanders will have to continue whatever magic he has during Tuesday's debate if he hopes to win over more Clinton supporters.