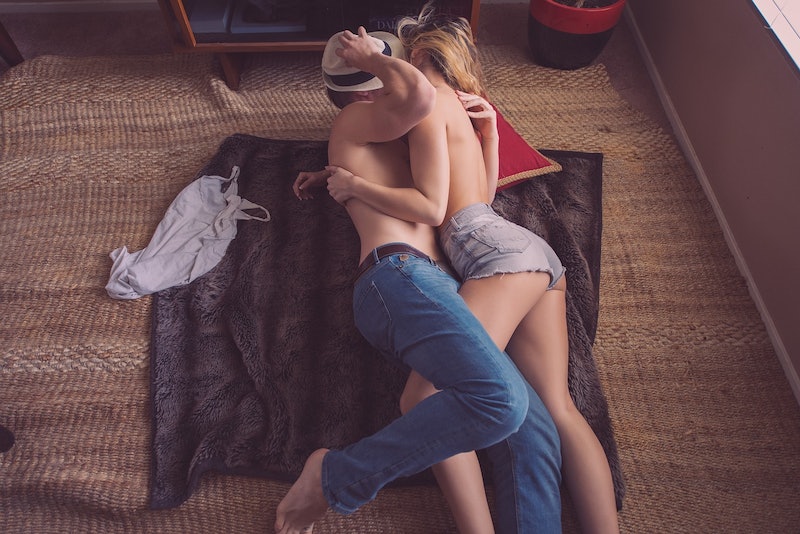 Trying to make a baby? Have as much sex as possible, says a new study from researchers at Indiana University — and not just for one week out of the month, either. Their report, which was published Monday in the journals Fertility and Sterility and Physiology and Behavior, refutes your biggest takeaway from high school bio: that a woman can only conceive during ovulation. Believe it or not, simply having more sex can make you more fertile, researchers say, by widening your ovulation window. Physiological changes occur in a woman's body during those pivotal post-coital moments (we're talking more than afterglow here, folks) that boost her immunity, help maintain a healthy uterus, and go on to protect the implantation of a potential embryo. Pretty amazing stuff, huh?

While tracking ovulation is still super important if you're trying to get pregnant, this new research suggests that cervical mucus plays an even larger part than previously believed (but more on that later). The most eye-opening part about all of this is that science is now basically telling us that pregnancy can occur outside the ovulation window, which typically happens mid-cycle. This groundbreaking research, done in conjunction with participants in the Kinsey Institute's WISH (Women, Immunity and Sexual Health) Study, is the first of its kind to show that increased sexual activity may promote immune functions that increase the odds of getting pregnant. According to Dr. Tierney Lorenz, a visiting research scientist at the Kinsey Institute who spearheaded this study, the more sexual we are, "The sexually active women's immune systems were preparing in advance to the mere possibility of pregnancy."

The immune system is believed to take a proactive role when it comes to fertility, and actually works in tandem with cervical mucus to do two things: It helps move sperm along on their path to conception, and creates helper T cells and antibodies that can fight disease without disturbing the environment of the uterus. "We're actually seeing the immune system responding to a social behavior: sexual activity," Lorenz added. Non-pregnant women who are sexually active, according to this new study, have higher levels of helper type 1 T cells and antibodies during the follicular phase of the menstrual cycle, when the ovaries' follicles are maturing (so, right before ovulation occurs), and higher levels of helper type 2 T cells during the luteal phase (the phase after ovulation). The increase in these cells and antibodies can up the odds of conception by protecting the body from illness and disease. So for couples trying to conceive, ideally, they should be getting freaky all the time — not just mid-cycle.

But maybe we should back up a minute and familiarize ourselves with cervical mucus — otherwise known as that gunk you find in your skivvies. However not-so-fun it may be at times, cervical mucus is some pretty amazing stuff, and plays a major role in fertility. In fact, it's so vital that women who want to conceive learn how to read their discharge and, well, get to know themselves in a really intimate way (all you need is a finger or two, and up you go).

Thanks, GP. Now, we'll take a closer look at the "wetness" and what it can tell us about our fertility. Note: As I mentioned above, a clean finger is all you need, or sometimes, the "wetness" appears clearly on toilet paper (especially after a bowel movement).

Sure, it may seem a little gross sometimes, but extra-stretchy and pliant cervical mucus helps the sperm find its way up the cervix.

So Does Clear, Watery Cervical Mucus (Just Not As Much As the Egg White Variety)

This kind of cervical mucus is usually yellow or white in color, and as its name suggests, it's somewhat creamy in its consistency. Up until now, it's been believed to stop sperm dead in its tracks, because of that consistency. But according to the Indiana University study, it comes packed with helper T cells and antibodies, making this kind of discharge also pretty vital to conception. (In other words, if you're trying to conceive, keep doing it!)

This glue-like substance is the thickest of all cervical mucus types. It indicates when your body's fertile window has been closed, which is a pretty important reminder, whether you're trying to get pregnant or not. Basically, sperm has a hard time swimming through the chunks found in this variety of mucus, which is why they get blocked before heading on up into your cervix. But hey, the more you get busy, the more chances you have of fortifying your cervical mucus with baby-making properties.

So there you have it — everything sex ed never covered. Now go on and make that baby!

... Or don't. Either way, you have been armed with some pivotal knowledge. Thanks, science.