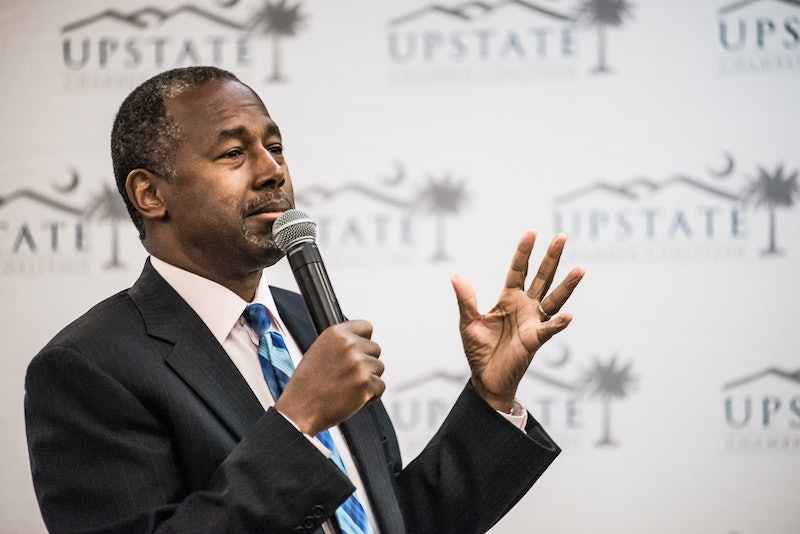 Ben Carson has a strange obsession with Adolf Hitler, and continues to bring up the hated dictator in his presidential campaign. On Thursday, CNN's Wolf Blitzer questioned Carson about a passage from his book, A More Perfect Union, in which Carson states that German citizens were disarmed by the government before millions were killed in the Holocaust, asking him, "If there had been no gun control laws in Europe at that time, would six million Jews have been slaughtered?" Carson told CNN: "I think the likelihood of Hitler being able to accomplish his goals would have been greatly diminished if the people had been armed." Carson has repeatedly compared America to Nazi Germany to make the point that America will only be free of tyranny as long as the people have guns.

A More Perfect Union , which was released Tuesday, talks about multiple countries with tyrannical dictators. But he was talking about Hitler long before the book came out. In a graduation speech he gave at Lafayette College last year, Carson said: "What happened in Nazi Germany? I daresay the vast majority of German people did not believe what Hitler believed. But they didn’t speak up, and you see what the result was." Apparently, Carson is really worried about the U.S. turning into Nazi Germany.

Here are four other presidential candidates who also made Hitler comments they should regret, if they don't already.

Like Carson, Rand Paul has referenced Hitler many times over the years, but usually in the context of the economy and not gun control. In 2010, Paul said to a crowd in New York:

Some will remember in 1923 the pictures of wheelbarrows full of money and the money became so worthless that they would burn it for fuel. The workers demanded to be paid twice because at noon it was worth — something was worth half as much by 5 o'clock. That can happen in a civilized country. In Germany it led to Hitler. Hitler was basically elected in his first election. But he was elected because there was chaos. And you've got a strong leader who said, "give me your liberty and I'll give your security." Many of you remember the Franklin quote: He said, "you give us your liberty for security and you'll have neither." That is the danger.

Following the recession, Paul was so worried about the U.S. dollar becoming worthless and causing societal chaos that he thought the country could end up with a tyrannical dictator like Hitler.

In an interview with The Christian Science Monitor in June, Bernie Sanders said:

A guy named Adolf Hitler won an election in 1932. He won an election, and 50 million people died as a result of that election in World War II, including 6 million Jews. So what I learned as a little kid is that politics is, in fact, very important.

The point Sanders was making isn't really problematic, but his facts were incorrect. As The Washington Post pointed out, Hitler actually lost the 1932 election, and rose to power by gaining a two-thirds majority in the German parliament, which enabled him to pass a law that abolished the office of president and gave him complete power.

In August, Donald Trump declared on the campaign trail in South Carolina, "I'm not a fan of Hitler." His comment was in response to Los Angeles radio host Ricardo Sanchez's listeners calling Trump "Hitler" because of his offensive comments about Mexican immigrants. But the fact that Trump said he doesn't like a dictator he was compared to makes it sound like he doesn't like his own stance on immigration.

Last year, Clinton spoke about Vladimir Putin's decision to issue Russian passports to people of Russian ancestry living in other countries during the crisis in Ukraine at a private fundraiser, comparing Putin to Hitler. She said, "Now if this sounds familiar, it's what Hitler did back in the '30s."

While Clinton may stand by her comparison of the two leaders, saying that Putin is behaving like Hitler definitely won't ease U.S.-Russia tensions, or make diplomacy with the country any easier.