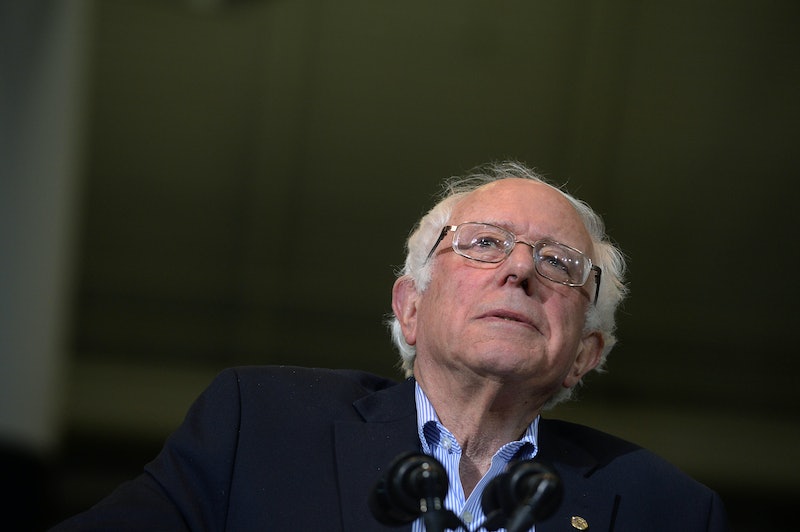 On Tuesday, voters will have their first chance to see Vermont Senator Bernie Sanders debate Hillary Clinton, Martin O’Malley, and the rest of his challengers for the Democratic presidential nomination. For the millions of Americans who have better things to do than obsessively follow every minute development of the 2016 campaign, this will be their first exposure to the entire Democratic field, and their first opportunity to begin thinking about how to cast their votes.

Very few people believed Sanders had a chance when he declared his candidacy six months ago, but he’s defied expectations at almost every turn. The progressive icon has had unmitigated success on the campaign trail, drawing enormous crowds at every turn (crowds that have surprised even the senator himself). He currently leads the polls in New Hampshire, and his massive following amongst Democratic voters has reportedly made Clinton nervous at her prospects of winning the nomination.

And yet despite all of this, many people still refuse to believe that Sanders has an actual shot at winning the Democratic presidential primary. However, the debate might change that. The first Democratic debate could be the moment that voters and pundits stop underestimating Sanders’ potential for success. Here’s why.

Sanders, the only self-described socialist in Congress, is already a unique figure in American politics, and he’s taking a unique approach to Tuesday’s debate. According to reports, Sanders isn’t holding mock debate sessions, and won’t attack any of his opponents directly. Those are highly unusual choices: Most candidates hold extensive debate preparations, and have one or two pre-planned “zingers” to deploy at their competition on the stage.

By contrast, it appears that Sanders is planning to simply show up and talk about his policy positions. For voters accustomed to debates full of scripted mudslinging and pandering, this will set him apart from the other politicians on the stage — and if there’s anything we’ve learned from Donald Trump and Ben Carson, it’s that Americans like candidates who don’t sound like politicians.

He’ll Have The Biggest Audience He's Ever Had

Sanders has no problem attracting a crowd: A recent Portland rally attracted more than 27,000 supporters, which, as The Washington Post pointed out, is more than five times the amount that Clinton has seen at an event.

But that will be peanuts compared to his first national televised debate. While it’s impossible to say exactly how many people will tune into the debate, the first GOP presidential debate of 2016 drew 24 million viewers. Even if the first Democratic debate draws only one tenth of that audience, it’ll still be over 100 times larger than Sanders’ largest rally to date.

This matters because Sanders’ policy positions are broadly popular the American electorate — much of which will be hearing him from the first time on Tuesday.

A Solid Debate Performance Can Be A Game-Changer

Carly Fiorina’s presidential campaign attracted little attention until August, when her commanding performance at the first GOP presidential debate won rave reviews. Her second debate was equally well-received, and she’s now one of the leading candidates in the field. This has happened before: In 2012, Newt Gingrich won the South Carolina primary largely on the basis of a single good debate performance

Obviously, no one knows how Sanders will perform on Tuesday. But the value of a good stint on the debate stage can’t be understated, and if Sanders knocks it out of the park, it could well be a game-changer.

He Won't Have To Compete For Speaking Time

Due to the comically large number of Republican presidential candidates, the party’s debates have been a colossal mess, with candidates constantly elbowing one another (not literally) in an attempt to win an extra minute or two of speaking time.

But Tuesday’s debate stage will feature just five candidates: Sanders, Clinton, O’Malley, former Gov. Lincoln Chafee and former Sen Jim Webb. The latter three are all averaging less than 1 percent in the polls and, let’s face it, don’t have a prayer of winning the nomination. Tuesday, then, will essentially be the Sanders-Clinton show, and that will give Sanders ample time to explain his (largely popular) policy positions to the American people.

His Main Competition Has An Uphill Battle

If Sanders only real competition in the debate is Clinton, Sanders definitely has the upper hand. Clinton faces a tricky task: Defeat Sanders in the debate without alienating his die-hard supporters.

How will she do this? Politico reports that Clinton will attempt “embrace some of Sanders’ ideals while dismissing his solutions.” That’s a difficult needle to thread, and while she may be able to do it, Sanders task is much less daunting: He simply needs to explain his policies in a clear, accurate manner.