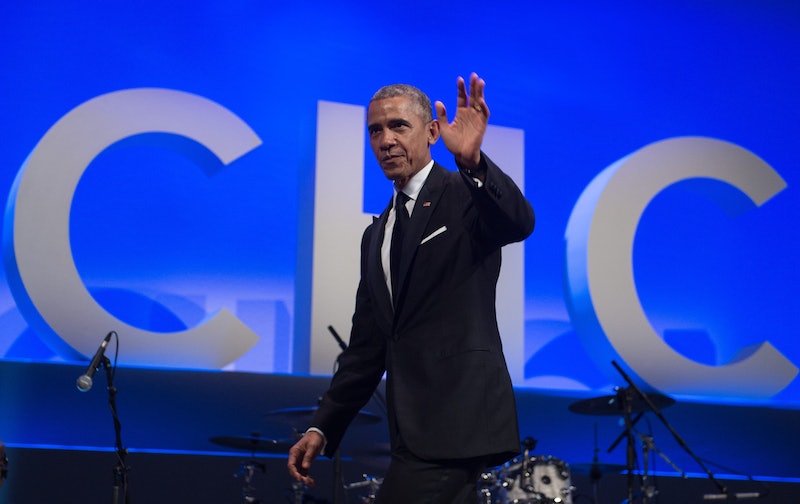 President Obama delivered an impassioned keynote speech at the Congressional Hispanic Caucus awards dinner on Thursday night. The commander-in-chief took aim at damaging immigration reform rhetoric while also highlighting his own accomplishments since first taking office in 2008. According to Obama, the country is currently on a record 67-month streak of job creations. Likewise, this is the first time in American history that more than 90 percent of citizens have health insurance. POTUS certainly has a lot to boast about, but he's well aware there's more work to be done. The 10 best Obama quotes from his CHCI speech certainly reflect that.

Obama began his speech by evoking the spirit of Ed Roybal, a former California representative and a founding member of the CHCI. Roybal had faced discrimination the day that he proposed to his wife. She'd said yes and they'd gone to a hot dog stand to celebrate because, the president joked, "He was making the kind of money I was making when I proposed... things were simpler back then." Near the stand, the couple was approached by a police officer, who temporarily detained them and demanded identification. The officer removed every card from Roybal's wallet and forced him to pick everything up off the ground. Despite the rampant discrimination, Roybal persevered, rising from City Council member to serving in the House of Representatives. It is that spirit that the president drew the most inspiration from. Obama said:

We can imagine his fear and humiliation. What had been a beautiful day had suddenly become an example of occurrences that were happening far too often. ... That young man never lost faith in his country, and less than 25 years later, stood under the capital dome to represent those very streets in the Congress of the United States of America.

That story set the tone of Obama's speech, complementing his own determination and core belief in bipartisanship. Obama praised Roybal's dedication to the country as well as his legacy that lives on even after the congressman's staggering three decade political career. Obama continued:

[Roybal] dedicated his life to the idea that America can change, that our union can become more perfect and today his legacy lives on; not only in the legislation he passed and the improvements in his district. ... He helped start the CHCI because he knew we were stronger together than we could ever be alone.

Obama was realistic about where he's taken the country over the course of his two presidential terms. He continued to rally the crowd at the Walter E. Washington Convention Center in Washington, D.C. Obama said:

When the cynics told us we couldn't change our country for the better they were wrong. There are now more job openings today than in any time in history. Our high school dropout rate is the lowest on record and Latino students are making some of the biggest gains.

The country has certainly changed substantially since Obama first took office and so has the opinion of his detractors. Obama criticized the right's potential nostalgia for the years before he was elected, joking that the year following the recession was "the golden era":

They [cynics] have invented this new reality where everything was terrific back in 2008, when the unemployment and uninsured rates were rising and DREAMers lived in fear of deportation and [Osama] bin Laden was still at large. That was the golden era in those days. ... Now when you listen to them, you still don't know what they're for except turning back the clock on the work we've done together.

Though he never named candidates directly, it's clear that Obama was unimpressed by the current crop of Republican candidates whose established records go against their current opinions. The president took particular issue with repeated offensive comments that seem to go unchecked completely. In short, he's fed up. Obama said:

That's not leadership — turning against what's right the moment the politics in your base gets tough. Leadership is not fanning the flames of intolerance and then acting all surprised when a fire breaks out, saying clearly inflammatory things then saying well that's not what I meant until you do it again and again and again.

Though the divide between the left and the right appears to be ever widening, Obama did manage to find some common ground with former President George W. Bush. He quoted Bush's 2006 speech on immigration and praised his predecessor for pushing the issue to the forefront, something he's similarly vowed to continue doing:

My predecessor, George W. Bush... made immigration reform a core priority. 'We cannot build a unified country,' he said, 'by inciting people to anger, or playing on anyone’s fears or exploiting the issue of immigration for political gain...' Think how much better our economy would be if the rest of his party got the message.

Ultimately, Obama said, Americans are far more similar than they are different. The issue of immigration has become one of discrimination and, as the president said, it's a problem that's sadly all too familiar:

There have been generations of immigrants that have been subject to the same kind of attitude with some of the same stereotypes. It wasn't right then and it wasn't right now. And unless you were one of the first Americans — unless you're Navajo or Cherokee — somebody somewhere came from some place else.

Obama had some choice words for presidential hopefuls, whose faith in the country he explicitly criticized. "Why are some of the folks running for my office so down on America?" Obama asked lightheartedly. Yet again, he highlighted the ways that immigrants are beneficial to the country. He also pointed out that those who migrant are doing so far more legally than previously thought:

If you want to be taken seriously as a leader you can't just be against everything. You've got to be for something. You can't just feed on fear. You should be feeding hope. You should be fixing our immigration system. ... You should tell the truth which is illegal border crossing is the lowest that it's been and economist agree that immigrants don't hurt the economy but help.

One of the most talked about immigration reform plans has been Donald Trump's poor proposal to build a massive wall between America and Mexico. Obama explicitly condemned the plan and made a commitment to continue fighting for the rights of all citizens no matter where they're from:

America's greatness does not come from building walls. Our greatness comes from building our opportunity... I vow to spend every last day in office making sure everyone can get ahead.

He closed his speech with perhaps the strongest rallying cry for the CHCI to continue its work no matter how long it takes. Whatever Obama decides to do once his final term as president has ended, it's clear he'll remain a strong voice in the Democratic party and for the advancement of citizens everywhere. Obama concluded:

This change will not be easy because change never is... It takes longer than the tenure of one president but what we together have shown and proven is when we stick together and put our shoulder to the wheel of history, not only is change possible, change is inevitable.