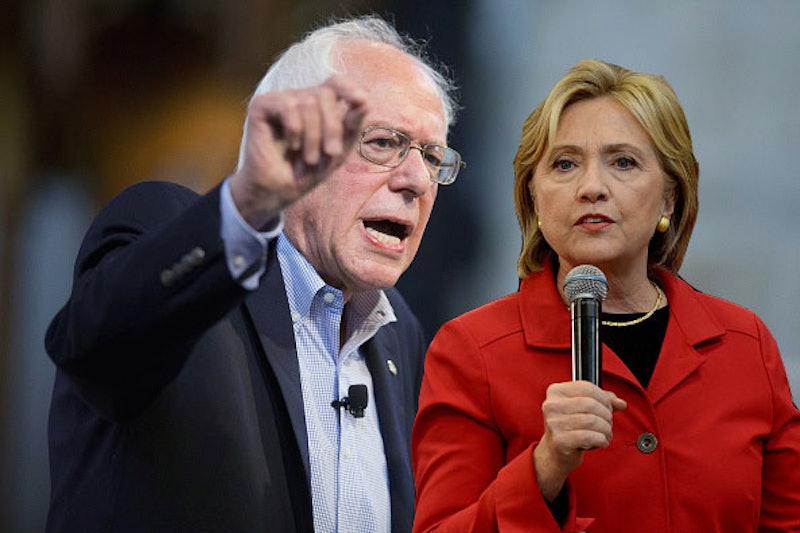 Hillary Clinton and Bernie Sanders remain the top two Democratic candidates currently running for president, and the two will finally face off along with fellow candidates Jim Webb, Martin O'Malley, and Lincoln Chafee at the first Democratic presidential debate on Tuesday. In a recent Public Policy Polling study of current as well as past left-wing presidential candidates like Al Gore and Michael Dukakis, Clinton remains head and shoulders above the rest, while Sanders consistently falls in second place. Though both have fairly similar ideals, there is undoubtedly a handful of important issues that set the top two contenders apart, and the differences between Clinton and Sanders will be on full display during the debate.

According to an InsideGov comparison of Clinton and Sanders, the two are the most drastically different when it comes to foreign policy and military force, though the study also suggests that Sanders is slightly more liberal when it comes to individual rights. And, up until Wednesday ago, it appeared as if Sanders and Clinton felt the exact opposite about the recently drafted Trans-Pacific Partnership. While Sanders has long opposed the deal, Clinton previously supported the trade agreement while serving as President Obama's secretary of state. Now a candidate, she has since issued a statement questioning its efficacy, saying:

I am not in favor of what I have learned about it. I don’t believe it’s going to meet the high bar I have set.

Here's how else the two differ.

Clinton's standards are just as rigid when it comes to the country's involvement in Syria. She has advocated for a no-fly zone across Syria along with humanitarian aid to be sent to the embattled country. The former secretary of state recently doubled down on her position and has suggested that Russia's cooperation is key to effectively implementing such restrictions. Sanders joins Obama in thinking quite oppositely. The Vermont senator believes that such a move would only further complicate the conflict. Sanders said:

I oppose, at this point, a unilateral American no-fly zone in Syria which could get us more deeply involved in that horrible civil war and lead to a never-ending U.S. entanglement in that region. We do not want to make a very complex situation in Syria even worse.

Just last year, Sanders voted against a bill that would allocate funds toward training Syrian rebels. He then reiterated his position that American involvement alone would do little to successfully end the country's civil war. Nonetheless, the country has been attempting to train Syrian rebels, something that Clinton supports. The Democratic frontrunner has been highly critical of the program, however, and believes that not enough has been done to properly train an adequate amount of soldiers. Clinton had this to say in a September interview on CBS' Face The Nation:

I did recommend at the beginning of this conflict that we do more to help train those who were in the forefront. That was not the decision that was taken at that time. A lot of what I worried about has happened.

During her tenure as secretary of state, Clinton deeply advocated for more involvement in the Middle East, especially regarding U.S. involvement in Egypt following the Arab Spring as well as in Iran. In her book Hard Choices, Clinton questions the restraint the president showed following the re-election of Iranian President Mahmoud Ahmadinejad in 2009. Sanders has consistently been against deploying troops to the region and has consistently been outspoken against the Gulf War as well as the war in Iraq. On Sanders' own FeelTheBern.org, the candidate explicitly states that the military should only be used as a last resort.

Sanders' consistent voting record on issues of gun control shows the influence that the state of Vermont has had on his politics, a region that prides itself on its hunting and relatively lax gun laws. The typically liberal candidate draws a very hard line against gun restrictions, though he has stated that he's in favor of banning weaponry that could be used for anything but hunting. Sanders has voted against the Brady Handgun Violence Prevention Act, which requires those interested in purchasing firearms complete a federal background check.

Clinton and Sanders once again find themselves at odds regarding key legislation. The Glass-Steagall Act, which was implemented in 1933, established the FDIC and created a divide between investment and commercial banking. Sanders proudly supports reinstating the bill as a means to combat institutions he deems too big to fail and therefore "too big to exist." Clinton's primary issue with the Glass-Steagall Act is its large scope. She says reviving the law simply wouldn't be enough and has insinuated that she may have a better economic plan. Speaking at a campaign rally in Iowa, Clinton said:

If you only reinstate Glass-Steagall, you don’t go after all these other institutions in what is called the shadow banking system — hedge funds and other financial entities that have too much power in our economy.

Once again, Sanders has been incredibly consistent in his voting record on a key issue. Regarding national security, the presidential hopeful has voted against the Patriot Act and even co-sponsored legislation that would've eliminate the NSA's phone surveillance records altogether. Though Clinton originally voted in favor of the Patriot Act, she has been supportive of its reform and says transparency is key. Her surprisingly quiet stance on bulk data collection as well as her criticisms of NSA whistle blower Edward Snowden — the the information he leaked could potentially help terrorist organizations — makes it appear as if she ultimately falls in favor of surveillance, something that Sanders is vehemently against.