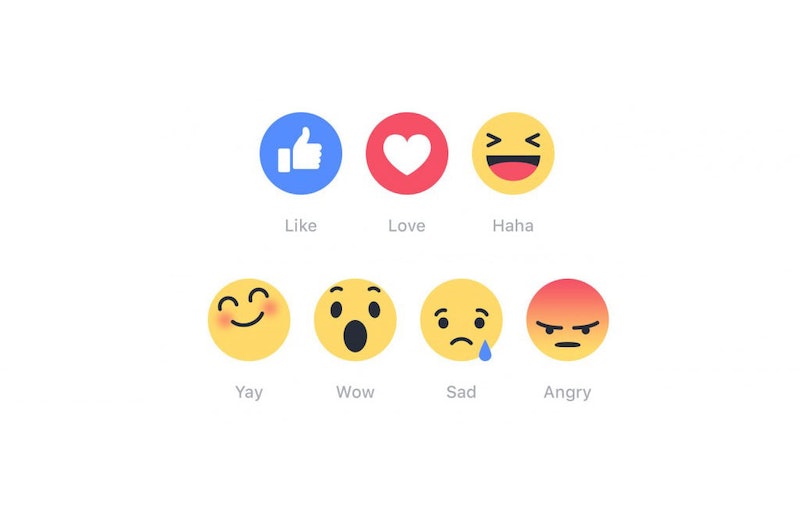 Facebook's "Like" button — it can be so ambiguous and even downright frustrating sometimes. ("Dear (name of crush), why did you like my post?") Well, Facebook is hoping to clear up all that mystery with Reactions, or emoji-like buttons that let users express a wider range of emotions in response to their friend's postings. But what do all those Facebook face reactions mean?

For years, a small contingent of Facebook users have clamored for Dislike buttons to sit opposite of the ubiquitous Like, but let's be real. No one wants to know that no one likes what they think. Plus, a Dislike button could open the door to widespread cyberbullying. At least with Reactions, you can be more accurate with your feelings, and none of them are that negative.

Reactions, which was announced Thursday by CEO Mark Zuckerberg on his own Facebook page, is currently testing in Spain and Ireland. After receiving initial feedback, the company will then decide how it wants to roll out the service to other countries. So, for those of us in the United States, it might be weeks (or never) before we can let everyone know just when we feel like saying "Yay." Until then, here's an idea of the faces you might get and the perfect times to use them.

It's Monday. You're in desperate need of coffee, and you tell your friends how much you need to be hooked to an IV of caffeine. This is a Like moment.

It's 4 p.m. on a Friday, and your friends are already getting their Happy Hour on. Time to bust out the Love.

Your old roommate shares a TBT photo of the most ridiculous shenanigans you two used to get into in college. No need to say "haha" when you have a Reaction to say it for you.

Pop the champagne and start dancing. That big promotion you were hoping to get? It's yours. Yay!

Remember those Russians who free-climbed the Shanghai Tower, the world's second tallest building? And Go-Pro'ed the entire thing? That deserves a wide-mouthed Wow.

Deaths of unarmed black men, like Eric Garner, at the hands of police continue to spark outrage across the country. This is when you get Angry.

Whether you're celebrating or giving a call to action, there's a reaction for everything. Now, let's just hope these guys actually make it to the States.