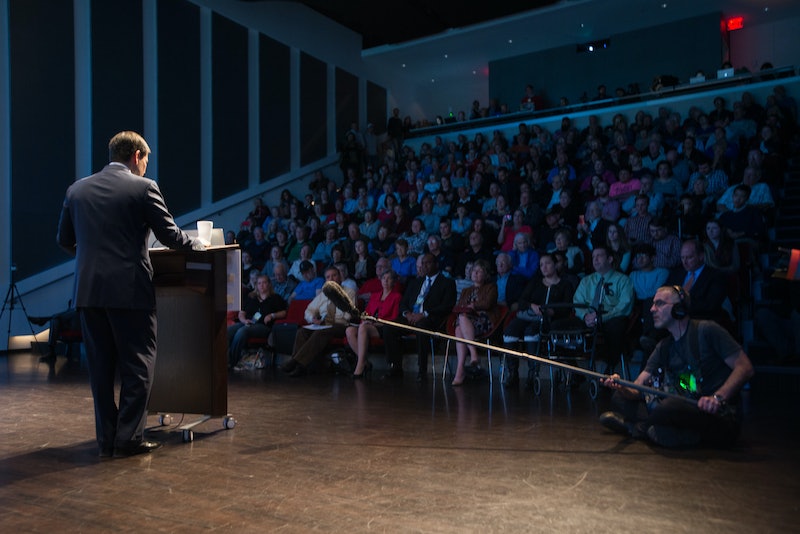 At long last, the Democrats will be joining in on the fun. On Tuesday night, CNN will be hosting the first Democratic presidential debate, featuring an expected field of Hillary Clinton, Bernie Sanders, Martin O'Malley, Jim Webb, and Lincoln Chafee. In other words, the polls being what they are right now, it'll be a showdown between Clinton and Sanders for the heart of the party, and it's sure to be different from what we've seen from the GOP debates so far — here are 5 issues the Democratic debate will bring up that the GOP debate basically ignored.

Obviously, there's an absolute chasm between the concerns of GOP primary voters and Democratic ones at the moment. One one side of the political world, talk of border walls, defunding Planned Parenthood, praising all things Reagan, and vehement denunciations of the Iran nuclear deal is what's hot, but on the Democratic side, it's assured to go very, very differently. Based on the candidates running on the Democratic side of the ledger, the politics of the moment, and the fact that having a mere six candidates on stage allows more speaking time for each, here are some issues you can bet you'll hear tackled on Tuesday night.

The Republican Party isn't particularly interested in deep-dig conversations about income inequality, which are a quick way to be labeled a socialist in conservative circles. Simply put, a vast number of Republican voters and elected officials alike do not view income inequality as a problem, much less an issue worthy of vetting candidates over.

But when you've actually got a self-avowed socialist running firmly in second place, you know this issue is going to get some play — it's basically the signature focus of the entire Bernie Sanders campaign, and this is an area where you'll almost certainly see him try to pull Clinton to the left. For Sanders, every second he gets to talk about this issue will be a godsend, as it's without a doubt the one he's got the most credibility and track record to speak on.

Okay, so the first, Fox News-hosted GOP debate did obliquely mention the foremost civil rights movement of our time — they devoted a whopping 50 seconds to discussing police violence, in the form of a milquetoast answer from former candidate and Wisconsin governor Scott Walker.

When the Democrats line up, however, this figures to be an issue that'll get a lot more play. Beyond the fact that black voters overwhelmingly vote for Democrats, and were a hugely crucial voting bloc in 2012, the movement has asserted itself firmly into the election process, repeatedly challenging Sanders to craft a racial justice platform (which he did, a direct result of their protests), meeting with Clinton, and calling on the progressive left as a whole to give their cause an appropriate, proportionate focus. It'll be absolutely fascinating to see how the top two candidates handle this, in addition to distant longshot Martin O'Malley — he ran into a little trouble on this point during the Netroots Nation conference earlier this year.

Sure, the GOP candidates spent plenty of time talking about immigration, but the tone, language and ideas are so wildly distant from how any of the Democrats are likely to approach it that it's virtually an entirely separate issue. It doesn't help that the Republicans have a frontrunner who broad-brushed Mexican immigrants as "criminals" and "rapists" within the first five minutes of his campaign announcement speech, nor that his only real variable is just how big and glorious a border wall he'd force Mexico to pay for. Basically, Trump's vitriolic influence has dragged the debate even further to the right than usual, and that's something that should give anyone who cares about humane immigration reform some angst.

But on the Democratic side, this is yet another key issue for a constituency that's really come through during the last two elections, in spite of thriving frustration that immigration reform never got the sustained, singular focus that health care reform got under Obama. And it just so happens that treating people compassionately regardless of where they come from is the right thing to do, in addition to being the right political decision — expect to hear all the Democratic candidates draw a stark focus between themselves and the Republicans on this.

It's not exactly in the Republican DNA to spend time in a presidential debate discussing the impact of sexism in politics, and under some circumstances even the Democrats might overlook this — it's a lot less likely without a woman contending for the nomination, at the very least. And while Carly Fiorina's momentary dust-up with Donald Trump came close, even that was a bit more restrained and narrowly focused than it might have been, given the latter's robust history of verbal attacks on women.

On the Democratic side, however, this will surely get a question or two, by virtue of frontrunner Hillary Clinton being one of the most popular targets in modern politics for sexist jokes, implicitly biased assumptions, and frivolous coverage of her looks rather than her ideas. It also might be good for Sanders to have an answer ready if he's asked — when Ana Marie Cox broached the subject of gendered media coverage with him in a New York Times Magazine interview in August, his reply was rather prickly.

With the grisly mass shooting that took place at Umpqua Community College last week still fresh in the national consciousness, and the grim, ritualistic relationship America has to these kind of atrocities, there'll no doubt be time devoted to this issue come Tuesday night. It could be a particular point of concern for Sanders, who despite his extreme liberal grassroots appeal, has been a surprisingly pro-gun candidate throughout his time in Congress.