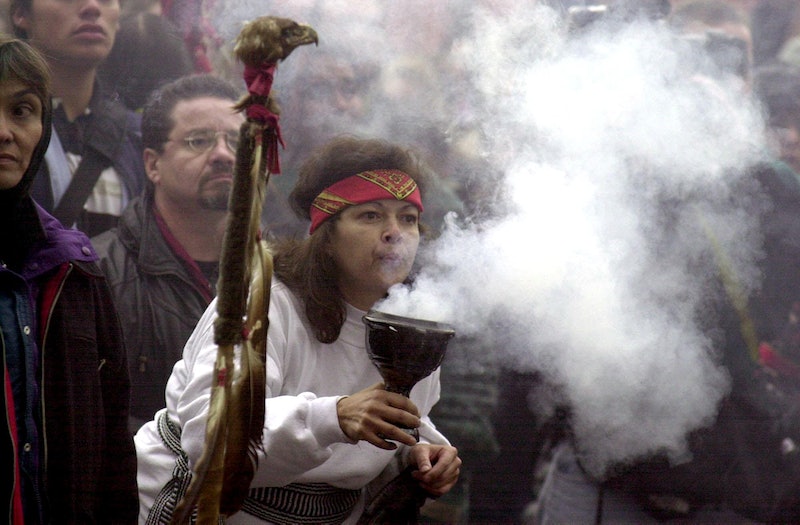 Monday is Columbus Day, but it shouldn't be. Unofficially celebrated for centuries, Columbus Day became a federal holiday in the United States in 1937. Logistically, celebrations of the holiday are actually quite limited; only 22 states actually celebrate it, and according to Vox, only 15 percent of private businesses close. But even if the holiday's popularity has long been dwindling, its name carries the weight of racism and genocide. For this reason, we should all get behind the trend of renaming Columbus Day to Indigenous Peoples' Day.

It has become increasingly well known in recent years that Columbus didn't "discover America." Setting aside the fact that one can't actually "discover" lands that are already inhabited, Columbus wasn't even the first white European to happen upon the New World. Centuries before his time, Viking explorer Leif Eriksson built a small settlement in present-day Newfoundland after being blown off course as he was sailing from Norway to Greenland.

But even though Columbus didn't actually "discover America" or prove that the Earth was round, he did accomplish something far worse: genocide. Many will shy away from this term, referring to it as too extreme, or perhaps inaccurate. But taking a look at the history — as well as the United Nations' definition of genocide — permits us to see that what took place in the century following Columbus' first arrival in the New World could, indeed, be qualified as genocide.

When Columbus first encountered the indigenous people of the Caribbean islands, he wrote of his fascination:

They have no iron or steel or weapons, nor are they capable of using them, although they are well-built people of handsome stature, because they are wondrous timid. ... They are so artless and free with all they possess, that no one would believe it without having seen it. Of anything they have, if you ask them for it, they never say no; rather they invite the person to share it, and show as much love as if they were giving their hearts...

But this fascination was not benign. On his first voyage, Columbus seized numerous American Indians and forced them to return to Spain with him — most of them didn't survive the voyage, and none remained alive after six months. He was even more ambitious during his second voyage. Ferdinand and Isabella of Spain provided him with numerous soldiers, and when he returned to Hispaniola, he plundered the island's gold mines in return for the natives' hospitality. He also took new captives, the "best" he could find — but most of them, again, did not survive the long journey back to Europe.

Dominican friar Bartolomé de Las Casas, a European explorer turned Native American rights activist, was one of the first European explorers in the Americas, and after he failed to create a model state in Venezuela, he spent his life battling slavery and was appointed to be the first "Protector of the Indians" by the Spanish court. When Columbus and the Spaniards went about plundering gold mines and killing and raping those who stood in their away, de Las Casas wrote a harrowing eyewitness account:

...Whenever the Spaniards found them, they pitilessly slaughtered everyone like sheep in a corral. It was a general rule among Spaniards to be cruel; not just cruel, but extraordinarily cruel so that harsh and bitter treatment would prevent Indians from daring to think of themselves as human beings or having a minute to think at all. So they would cut an Indian’s hands and leave them dangling by a shred of skin and they would send him on saying "Go now, spread the news to your chiefs."

Writing for The Telegraph, novelist and historian Dominic Selwood explained exactly to what extent Columbus and his men shattered the population of the New World. "By 1900, a people which once represented a hundred percent of America’s population was reduced to a third of one percent," Selwood wrote.

It is with this historical context in mind that we should take a look at the U.N.'s definition of genocide:

In the present Convention, genocide means any of the following acts committed with intent to destroy, in whole or in part, a national, ethnical, racial or religious group, as such:

(a) Killing members of the group;

(b) Causing serious bodily or mental harm to members of the group;

(c) Deliberately inflicting on the group conditions of life calculated to bring about its physical destruction in whole or in part;

(d) Imposing measures intended to prevent births within the group;

(e) Forcibly transferring children of the group to another group.

Columbus and his men made a game of capturing and killing indigenous folks, testing their weapons on them and forcing them to deliver gold. They treated the native population as "specimens," aiming to parade some among them around the Old World to demonstrate their successful conquests. And since Columbus first arrived in 1492, this dehumanization of American Indians has never stopped. The United States is founded on the subjugation of entire populations, and even today, indigenous populations in the United States still face severe discrimination.

Last year, Aaron Sankin suggested in The Daily Dot that we either make a day like Election Day a holiday — to ensure that more people can actually get out and vote — or that we follow the national trend of renaming Columbus Day to Indigenous Peoples' Day. Following in the footsteps of Seattle and Minneapolis, eight more cities switched over to Indigenous Peoples' Day in the past two months, and the rest of us should fight for this change. We should be forced to confront the oppression that made our presence here possible. We are on stolen lands, and nothing we could ever do would be enough, but we should at least celebrate those who have been fighting for their survival for centuries, rather than the man who tried to make their survival impossible.