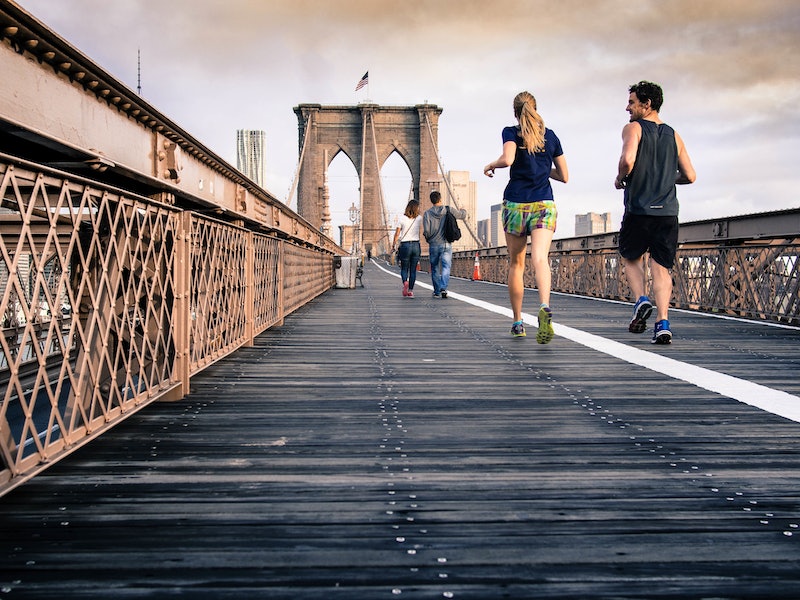 If you're actively trying to conceive, you've probably been getting in a lot of exercise between the sheets lately. But here's one more reason to keep active and healthy during the pivotal months before you get pregnant: New research from the British Journal of Sports Medicine found that exercising before conception can ease pregnancy pains later. In fact, women who did high-impact exercises like running or aerobics classes between three and five times a week had significantly lower rates of pelvic girdle pain during pregnancy (which, if you've experienced, is no walk in the park).

The comprehensive study looked at 39,000 first-time expectant mothers between 2000 and 2009. Of those women, approximately 10 percent experienced pelvic girdle pain, which affects the joints and ligaments near the pelvis and may persist for up to one year after birth. The researchers determined that women who worked out between three times and fives times weekly before pregnancy reduced their chances of developing the condition by 14 percent. (Don't worry about overdoing it, though: Women who worked out more than five times a week didn't fare any better or worse than their peers who practiced moderation.)

Starting a workout regimen before pregnancy also makes it easier to continue exercising while expecting, which has a whole slew of benefits on its own — from preventing excessive weight gain to reducing the chance of a C-section, to decreasing the chance you'll have baby who weighs more than 8.8 lbs. Beyond working out, though, there are a number of things you can do to help pregnancy go smoothly for you and your baby before you're even expecting. And most of them are pretty simple.

Because most women don't know they've been knocked up until they are four weeks along, the Centers for Disease Control and Prevention suggests taking a prenatal vitamin with at least 400 mcg of folic acid for a minimum of one month before you try to conceive. Really, experts say all women should do this — but it's especially important if you're trying to have a baby, since serious birth defects of the brain and spine, like spina bifida, can happen in the first few weeks of pregnancy. Taking appropriate amounts of folic acid can reduce the risk by 85 percent.

2. Schedule A Dentist Appointment And Get Those Suckers Checked Out

I know no one really likes going to the dentist, but scheduling a cleaning before conception helps ward off gum complications during pregnancy. That's important because the higher progesterone and estrogen levels that accompany baby make women more susceptible to gum disease — with some 40 percent of ladies developing pregnancy gingivitis. Between appointments, keep the good dental hygiene going at home by brushing, flossing, and using an antimicrobial mouth rinse.

3. Address Any Mental Health Conditions — It Will Improve Your Overall Wellbeing, But Also Your Fertility

It's a good idea for all of us to be proactive about coping with depression or anxiety, but this is especially true for women trying for a baby. One reason for this is that women with high levels of stress are 50 percent less likely to conceive in any given month than their peers. Alice Domar, director of the Domar Center for Mind/Body Health at Boston IVF, said this makes sense from an evolutionary standpoint. "If someone is clinically depressed, she can barely take care of herself, much less a baby," Domar told Babycenter.

4. Schedule A Preconception Visit With Your Doctor And Ask All Your Burning Questions

Getting your doctor in the loop about your baby plans as soon as possible is a good idea on multiple levels. Among other things, Doc can determine if prescriptions you are on are safe during pregnancy, can make sure immunizations are up to date and can tests for sexually transmitted diseases that could be dangerous for baby. An increasing number of medical professionals are suggesting patients get genetic screenings before conception, which are especially recommended by the American Congress of Obstetricians and Gynocologists for certain populations, including those of Eastern European Jewish descent.

5. Stop Smoking And Cut Back On Drinking

You've probably heard by now that smoking is bad, bad, bad for health, so it's best to quit that habit for good. Smoking is especially dangerous during pregnancy because it can lead to miscarriage, preterm birth, low birth weights, and lasting lung problems for baby. Even while trying to conceive, smoking can reduce your fertility and your partner's sperm count if he lights up, too. You've probably also heard alcohol is dangerous for an in-utero baby, but it can even can have negative effects before conception happens — as the Mayo Clinic reports excessive drinking is linked to ovulation disorders.

With a few smart moves, hopefully you can relieve some of the stress that comes along with trying to conceive, which will help you get back to what matters: enjoying the actual, you know, baby-making part.