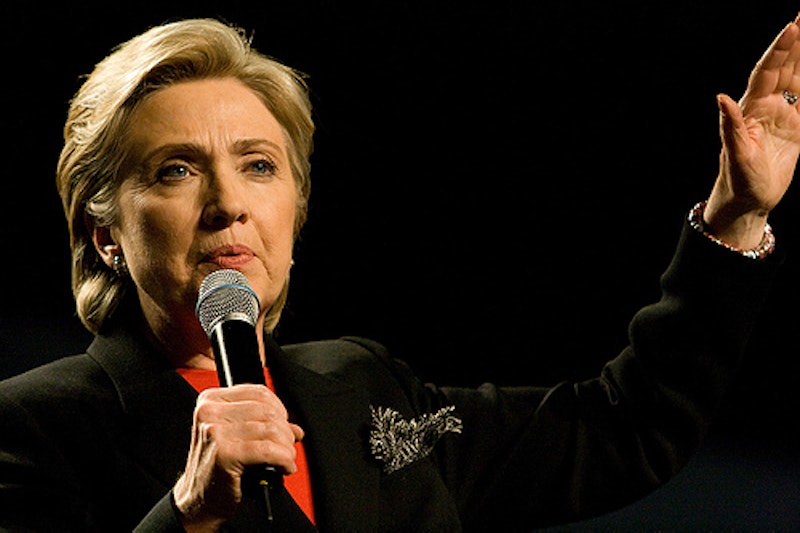 It's been a sad week in terms of gun violence, although in the United States of America, basically every week is — last Thursday we had the deadly Umpqua Community College shooting, and according to Mass Shooting Tracker's criteria, we've had five more since, including the shooting at Northern Arizona University on Friday morning that left one person dead and three more injured. In short, gun violence and gun safety reform is once again in the news, just as we've got a presidential debate on the horizon. So, will the Democratic debaters talk about gun control?

The thing about these big, nationally televised debates is that some candidates always keep as much an eye on staying on message and avoiding needless risks as they do going after others, and we could see a whole lot of that during Tuesday night's debate. With an establishment front-runner in Hillary Clinton, and really only one credible challenger (at least as far as the polls are concerned) in Bernie Sanders, there's not necessarily a lot of motivation for either one to get too aggressive with the other — that'll be left to fringe candidates like Martin O'Malley or Jim Webb, who desperately have to make a name for themselves by generating some heat.

But even among the top two candidates, the gun control issue could be one where some contention and distinctions will arise. Clinton, for her part, has long been a vocal proponent of gun control reforms dating back to her time in the U.S. Senate, and after the mass shooting at Emanuel AME Church in Charleston, S.C., earlier this year, she began bringing gun issues more to the forefront of her campaign, pledging that Democrats need to "take on the gun lobby," specifically the NRA, which has a decades-long track record as one of Washington's most powerful special interest groups.

Sanders, however, is an unusually pro-gun candidate considering his overall position at the far-left of his party — it might be the only area in which his politics lie to the right of Clinton's. His home state of Vermont has a very high rate of gun ownership, and his voting record throughout his time in Congress boasts a number of pro-gun votes in support of the gun industry, most controversially voting against the 1993 Brady Bill to impose federal background checks on gun purchases, and voting in 2005 to protect gun manufacturers from lawsuits stemming from crimes committed with their products.

Sanders has done some deliberate work to rehabilitate his progressive image on this front as the issue has risen in prominence over the last couple of months — he's said that he's putting together a plan to address gun violence, showing a similar on-the-fly adaptability to new circumstances as that which brought about his racial justice platform, in the aftermath of Black Lives Matter protests at his speaking events.

But regardless of how far he may come, or how ardently he may defend his past voting record and put forth a new plan for the future, the fact remains that this is the rarest of opportunities for Clinton to hit Sanders from the left, and it seems unthinkable that she wouldn't take the opportunity. It's entirely likely that you'll see Clinton taking a softer approach towards Sanders on many issues, but this is one where you might see her press the advantage.