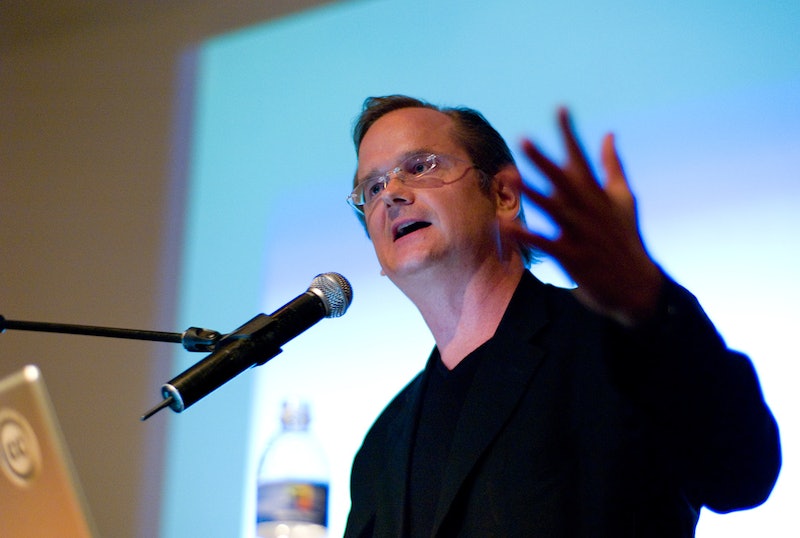 It's been a quiet campaign so far for Lawrence Lessig. Don't worry if you haven't heard of him before — according to the Democratic Harvard Law professor, neither have the majority of people in his own party. As the 2016 presidential candidate patiently waits at the mailbox for his invitation to next Tuesday's Democratic primary debate — unlikely at this point — it's a safe bet that the majority of prospective voters tuning into the pre-debate newscasts and hearing his name tossed about will be wondering, "Who is Lawrence Lessig?"

In an op-ed for Politico on Oct. 1, Lessig himself explained that the question wasn't wholly unwarranted. Given the current political climate, in which only top spenders and political big-wigs get precedence over the din of media clamor, it almost seems expected.

"[My] message is being stifled with the tacit approval of the Democratic Party leadership, who are deploying the oldest method available for marginalizing campaigns they don’t like: keeping me out of the Democratic presidential debates," Lessig wrote. "[And] while news shows have been busy limning the depths of Donald Trump’s brain, there hasn’t been time to consider a Democratic candidate saying something that no other Democrat is saying — especially if the party itself doesn’t consider the candidate a real candidate."

Lessig is lesser known in popular circles, but has extensive ties to both the Hill and Silicon Valley due to his Internet activism and championing of net neutrality. A strong opponent of Internet fast lanes, Lessig once explained in a 1999 speech to the WWW9 conference in Amsterdam that "the core of the Internet, the core value that defined its power, the core truth that made innovation around it possible, is this e2e (end-to-end communication / neturality) ... the fact ... that the network could not discriminate in the way that [large telecommunication companies like] AT&T could."

That sort of notion is the foundation on which Lessig's relatively fresh presidential campaign has been built: enable an uninhibited source of media, dialogue, and info-trading and toss out the giants that would try to suppress — or in layman's terms, overhaul campaign finance and lobbyist rules.

There's too much money in politics, Lessig argues. Too much corruption, too much wink wink, nudge nudge "I'll scratch your back if you scratch mine" wastefulness happening behind the scenes. "Every issue — from climate change to gun safety, from Wall Street reform to defense spending — is blocked by this fundamental problem: Congress does not represent the people," Lessig laments on his official campaign website.

He's not wrong: according to political scientist Lee Drutman, corporations across the United States spend an average of around $2.6 billion every year, trying to get Congress to pass its pet projects. Gone are the days of the Schoolhouse Rock bill, wearily pounding the pavement outside Capitol Hill — the legislative process today has taken on more of a pay-for-play, high-stakes poker game feel than anything initially imagined by the nation's founders. Rather than offering up solutions to the every-man, government has become its own Internet fast-lane, controlled solely by those who can afford to bankroll it.

Lessig's plan to change Washington by outing one grimy lobbyist group at a time, however, isn't foolproof. In fact, according to his own words, he's only planning to run as a referendum candidate — one that wins your vote, accomplishes his one task, then hands over the reigns to his second-in-command, whom Lessig has said would likely be someone like erstwhile Independent Vermont Senator (who's currently running as a Democrat). Plainly put, in voting for Lessig, you'd need to make sure you like his running mate for the presidential hot-seat too — because a few short months after the election, that's who your president would be.

Lessig's sole reason for running? To pass the Citizen Equality Act of 2017, which would combat congressional corruption and establish voter equality essentially using a one person, one vote system and implementing a system of vouchers which would allow the public to control who gets the money to run.

"'How do you ever think you’re going to make any progress on these issues so long as there’s this corruption in the way our political system works?'" Lessig once recalled late Reddit co-founder Aaron Swartz asking him during a 2014 interview — a question he particularly took to heart.

But none of that will matter if Lessig's grievances are kept from the mainstage on Tuesday. And for a candidate who is self-admittedly bleeding money, there's only so long he'll be able to sit back before his coiffures run dry.

"We Democrats should take up [these issues] now," Lessig wrote in his Politico op-ed last week. "But that will only happen if there is someone on that debate stage willing to say what most of America is already thinking: Yes, the policies the Democrats are pushing are the future of America."