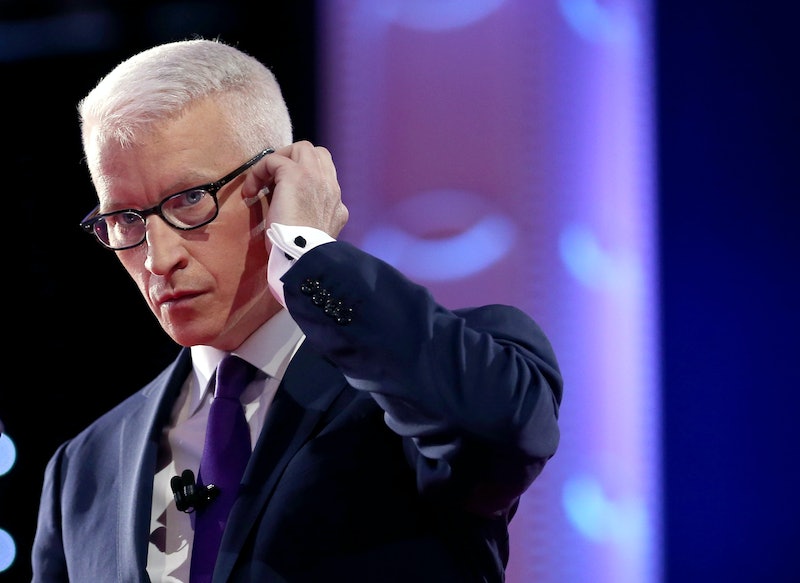 As anticipation over next week's first Democratic primary debate begins to heat up, at least some viewers will be busying themselves, trying to shut out one embarrassingly uncomfortable memory. After CNN announced in September that primary anchor Anderson Cooper would be leading the charge at the election festivities on Tuesday evening, corners of the Internet began dredging up recollections of the last time the anchor moderated a presidential debate, namely Cooper's statement about taxes to then-candidate and former Republican Rep. Michele Bachmann. Four years after the fact, the exchange is still particularly cringe-worthy.

"Congresswoman Bachmann, you also said at the last debate that everyone should pay something," Cooper said, posing a question to the Minnesota representative at the eighth (yes, eighth) GOP debate of the 2012 election cycle. "Does that mean that you would raise taxes on the 47 percent of Americans who currently don't pay taxes?"

The media reamed him for it. "There are plenty of fact-checkers around, and I don’t really consider it part of my job here to think about where candidates messed up, especially since a lot of their factually incorrect statements are just playing to their audience, and you sort of have to expect a lot of that," explained The Washington Post's Jonathan Bernstein in an op-ed later that night. "But Anderson Cooper, the CNN moderator, has no excuse: his claim that 47 percent of American pay no taxes was inexcusable. Just terrible."

It was almost laughable. By itself, the number Cooper had drawn up wasn't entirely incorrect — 47 percent of households in the United States don't pay federal income taxes. But as Bernstein also noted, that's very different than saying that those families and individuals don't pay taxes at all.

The truth is that the majority of that 47 percent (which is currently somewhere around 45 percent, according to numbers put out by The Tax Policy Center this month) don't make enough taxable income in the first place — so when tax day rolls around each spring, a good number of Americans actually see some of the money that had previously been withheld from their paychecks returned to them in the form of a check or electronic deposit. However, those individuals and families are still required to pay Social Security, Medicare, and state and local sales taxes — which makes up a good chunk of change when it's all finally boiled down.

Still, when compared to the remainder of Cooper's polished resume, the awkward 2011 debate slip-up was just a blip on the radar — and given Cooper's insistence that the debate will be more of a panel, where everyone has a chance to voice his or her own opinions without being rushed for time or peppered with "gotcha" questions.

"I think there’s great opportunity ... to really get a sense of who these people are," Cooper told The Huffington Post on Wednesday. "And I think that’s what people walk away with the next day or that night, thinking, ‘Oh, now I get who Martin O’Malley is,’ or ‘I get what Clinton’s position is on X, Y or Z.'"

So long as Cooper triple checks the numbers behind his questions this time, it's likely that things will be smooth sailing.