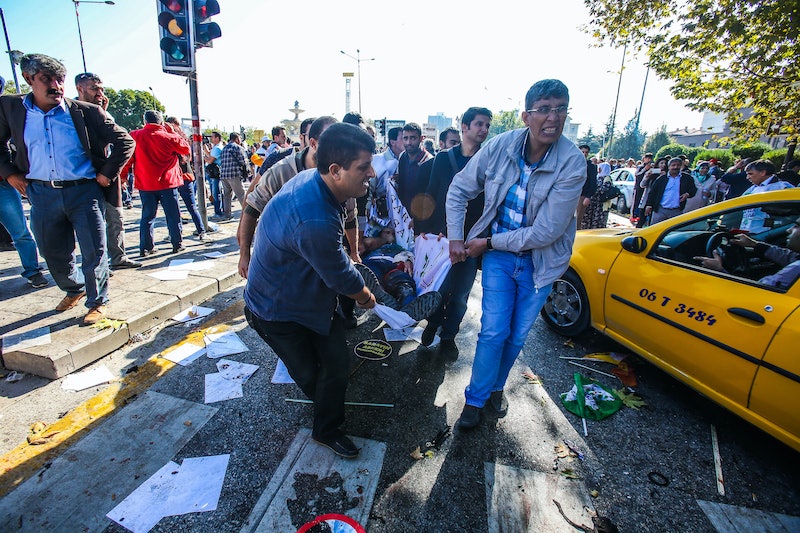 Chaos rocked the capital city of Ankara, Turkey when twin bombings killed at least 86 and injured nearly 200 on Saturday morning. The blasts were at the city's main train station during a peace rally around 10 a.m. local time and may have been the work of suicide bombers, authorities said. The bombings occurred just weeks ahead of the country's national elections, scheduled for Nov. 1.

It is unclear as of now who or what had set off the blasts, though officials suspected that the bombings were possibly the work of Islamic State militants (the group has not yet claimed responsibility). Some have also speculated that the Kurdish separatists, who have been involved in violent skirmishes with the Turkish state since a longstanding ceasefire between the two sides broke down in July, might have been responsible for the attack. As the BBC reported Saturday, tensions between the two sides have been escalating for months, and given the nature of the rally, where the pro-Kurdish HDP party (People's Democratic Party) was in attendance, some speculate that an attack from the group is equally plausible.

"The [peace] rally was organized against war and AKP's (the conservative Justice and Development party) hostile and violent policies ... hundreds of people around Turkey gathered to claim peace and put pressure on the government to end the war which has been conducted for over two months," wrote the leftist HDP party in a statement on its website. "[But] the main target of the attacks was HDP."

Turkish President Recep Tayyip Erdoğan on Saturday condemned the twin bombings as a "heinous ... terrorist attack," lamenting the loss of life and breakdown of peace in a statement.

"I strongly condemn this heinous attack on our unity and our country's peace," Erdoğan wrote. He added that the two sides must be united in the fight against extremism:

No matter what its origin, aim or name, we are against any form of terrorist act or terrorist organisation. We are obliged to be against it together. ... The attack at the Ankara Train Station is taking aim at our unity, brotherhood and future. The solidarity and determination we are going to display in the face of this attack will be the biggest and the most meaningful response to the terror. The perpetrators ... will be delivered to justice.

In contrast, some reporters slammed Erdoğan and his administration, alleging that they had barred journalists from covering the aftermath of the bombings. "No surprise, Govt response to Ankara terror attack is to gag media coverage of it," claimed Al-Monitor reporter Amberin Zaman, in a tweet on Saturday morning.

A video posted to social media on Saturday showed rally attendees dancing and singing together before the scene suddenly dissolved into mayhem. Grisly footage shot during and after the bombings showed bodies strewn in the streets. Banners that had been hoisted up during the peace rally were being used to cover the victims.

"Some people were crying and shouting out condemning the attack, some — particularly members of the Turkish Medical Association — were trying to help the wounded," Turkish journalist Faruk Bildirici told Al Jazeera. Bildirici, who had been standing just meters away from the blast, said that the bombs had detonated within seconds of one another. "[The rally] was to deliver a message of peace, democracy and brotherhood in Turkey. This attack prevented people from delivering this message," he said.