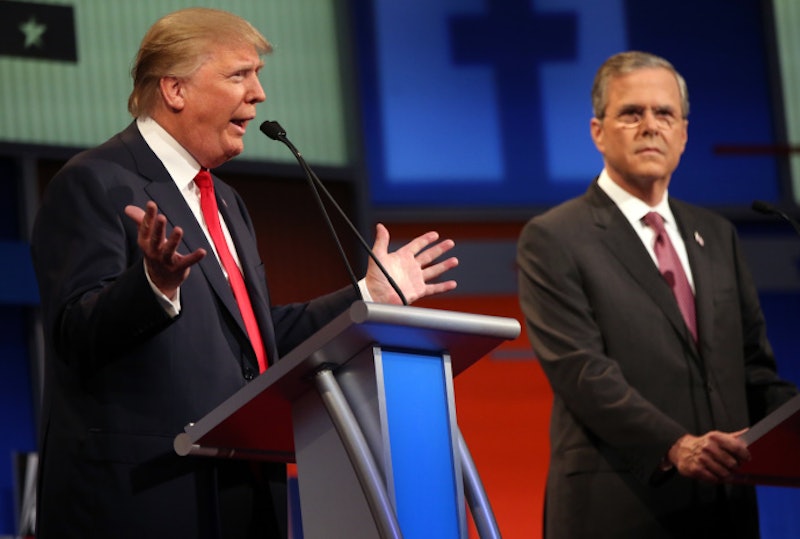 The next primary debate is just around the corner, but unfortunately for Donald Trump fans and political masochists alike, the loudmouthed GOP candidate will be absent from this one. Tuesday's first Democratic primary debate will play host to several big names, of course, including former Secretary of State Hillary Clinton, Vermont Sen. Bernie Sanders, former Maryland Gov. Martin O'Malley, former Virginia Sen. Jim Webb, and former Rhode Island Gov. Lincoln Chafee. But even with a more level-headed field and the typical, exhausting smack-talking between warring camps (which seems to be common among GOPers) virtually non-existent, there are plenty of reasons you'll ultimately miss Trump during Tuesday's debate, even if you hate yourself for it.

"What will Tuesday’s CNN debate look like if the two leading candidates aren’t going to slam each other?" Fox contributor Howard Kurtz complained in a Media Buzz column on Thursday. "I wouldn’t gamble on the Las Vegas event being scintillating television."

With Trump MIA at next week's debate, who will make cringe-worthy promises to the moderators to take up an independent candidacy in order to bring down their rivals? Who will make rude comments about the other candidates' physical appearances? Who will insult women, minorities, and everyone in between? Face it: without The Donald running his mouth at the Democratic primary showing, you might be too busy mourning the absence of the following things, rather than listening to Lincoln Chafee calmly discuss the essential employee visa program.

Remember that amazing moment that Trump told Rolling Stone reporter Paul Solotaroff that former HP CEO Carly Fiorina would never be president because of her looks? "Look at that face," Trump said. "Would anyone vote for that?" When Fiorina blasted him for those comments at the next GOP debate, Trump laid down the one-two punch, deftly replying, "[Fiorina's] got a beautiful face, and she's a beautiful woman." (Whew — that was close.... It was almost like he didn't care about women there for a second!)

With one sexist remark after another, the headlines practically write themselves. We're gonna miss that this time around.

If anyone knows how to throw discernible shade about things everyone's already well aware of, it's Trump. His endearing, vacuous commentary is just the best. Personal favorite: when Trump goes after another candidate's obvious shortcomings or outward appearance, the way he did with rival Rand Paul at the second GOP debate last month (Trump notably remarked, "I never attack him on his looks, and believe me, there's plenty of subject matter right there"). If Trump were a Disney character, he'd be that one bad guy that talks a good game, but ends up getting absolutely shellacked by the talking animal at the end of the movie, like Beauty and the Beast's Gaston. No one's slick as the Trump, no one's quick as the Trump, no one's mouth is incredibly filled with antagonistic vitriol as the Trump's!

Trump's magnificent policy agenda is pretty barebones, but you can't fault him for trying ("Gun and magazine bans are a total failure! There must be a wall across the southern border!"). Unlike other candidates who might try to use logic to convince voters of their stances on gay marriage and foreign policy, Trump just lays it out there and expects you to believe it.

At the first GOP primary debate, for example, Trump memorably declared, "[The] Mexican government is much smarter, much sharper, much more cunning [than ours because] they send the bad [people] over because they don’t want to pay for them." The crowd went wild. Even if the statement wasn't at all based in fact, people became extremely excited — and really, isn't excitement the most important part of a presidential debate?

Trump hates China. Trump loves the Bible (his second favorite book is The Art of the Deal). Rosie O'Donnell is a slob! He has so many websites. With Trump, you just never can tell what the brazen Republican candidate will say next, and isn't that invigorating? Who cares about what Bernie Sanders and Martin O'Malley have to say about criminal justice reform — I want to hear Trump's thoughts about George W. Bush being smacked with a shoe.

No doubt, Tuesday night's Democratic candidates will have a thing or two to say that will land them in the hot-seat on social media, but the nonsensical rants of the soft-serve ice cream-haired real estate mogul easily beat the pants off of his rivals every time.

I'd love to see Lincoln Chafee pull out an interpretive dance routine to Hall & Oates at next week's debate as much as the next person, but that's probably not going to happen. At least we'll always have Trump at the Roxbury to replay on YouTube, over and over again.