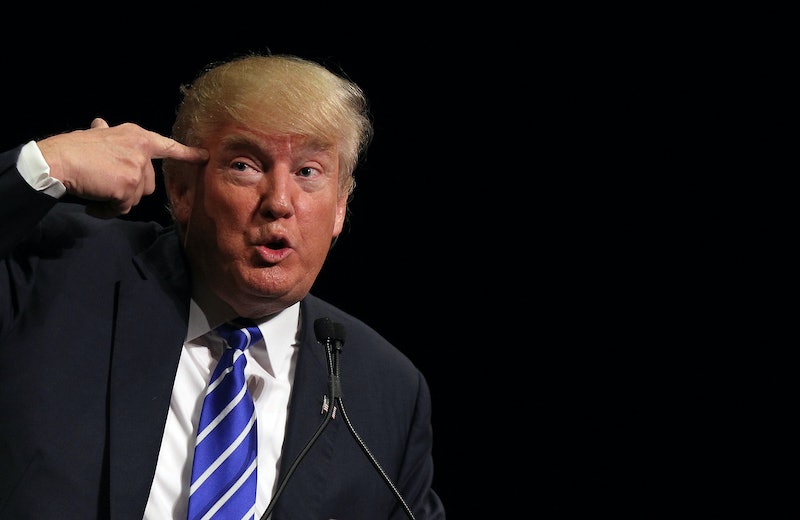 Prediction: Donald Trump will be the most popular Halloween costume this year. The billionaire business mogul and Republican 2016 presidential front-runner is basically a walking costume in everyday life. As the 2016 presidential race reaches peak absurdity, politician-themed costumes are sure to be everywhere this Halloween. But you don't just want to be one of many Donald Trumps at your friend's Halloween bash. This year, try meshing the political theme with Halloween's most old-school costume — zombies. Yes, that's right, here's your guide to a fast, easy, and cheap zombie Donald Trump Halloween costume.

Here are the essential items you'll need for any version of your zombie Donald Trump costume.

This comb-over wig is a given, and you can get it at a steal for $5. For a little more political spirit, you can purchase a wig with a "Make America Great Again" baseball cap at the discounted price of $30. America!

Put away the bronzer that you'd need for a regular Donald Trump costume and pick up a zombie makeup starter kit from Amazon for $6. Don't forget to drip some black zombie blood over your face and wig for extra effect that only costs you $7.

For most Trump costumes, you will need a suit. If you already have a stash of business suits for work, then this shouldn't be problem — pick your most business-y black or navy blue pants suit and you're set. If you don't have a business suit, it wouldn't hurt to invest in one for future jobs (just make sure you don't get any zombie blood on it). This one on Amazon is $55.

You can try stores like The Limited and JCrew, or score this deal online at Macy's, which you can buy on sale for $90.

Now it's time to pick your favorite zombie Donald Trump.

If you got your suit, comb over wig, and zombie face paint, but just want to keep it casual, then stick to Presidential Donald Trump.

Step 1: All you need to add is a striped or solid red tie.

Sure, there's plenty of colors, but the Donald wears red.

It's an essential for any presidential candidate and your Donald Trump costume. You can grab one for $6.

President Trump would surely be done campaigning, but you know he'd keep a stockpile of these around to give out anyway. Luckily, the price isn't as big as Trump's ego at $5.

Not pictured: the brains of the American public. Feast on them and laugh.

If you want to take the reality TV route, here's what you'll need:

Step 1: Grab a briefcase full of money. No, don't worry, it won't be real. If you don't have a briefcase for your job in the Trump building already, you can grab this one for $30.

Then you need fake money (unless you have a lot of spare cash around).

Make sure to put the larger bills at the top. Trump burns $1 bills.

Step 2: Rabbit ear TV antenna for your head (bonus points if you can make them look lodged into your skull):

You can use the cord on this $6 antenna to wrap it under your chin and secure it by tying at the top. Or you can take this chance to practice your balance!

Donald Trump has declared corporate bankruptcy four times during his business career. He basically was the walking dead.

Step 1: Turn all your empty pockets inside out.

Step 2: A briefcase, this time you can stuff it with...

Full of (gummy) worms! If you buy this five pound bag for $20, you'll have enough to hand out to any trick-or-treaters that you might run into.

You might only want to buy a few of these $3 chips, because buying a lot could get pretty pricey.

Not pictured: the tears from your lawyer as you file yet another lawsuit.

If you really want to up the creepy ante this Halloween, then double up on the fright factor and go as sexist and creepy Donald Trump. Here's what you'll need...

Step 1: A Miss USA sash to wear over your suit:

You can grab one for only $5 from Amazon!

Step 2: Just in case you don't have these already, grab a box of tampons for women who "have blood coming out of wherever."

You know the drill with Tampax. They'll run you about $5. But your questionable views about women, also essential for a sexist Donald Trump costume, those come at the low, low price of your dignity.