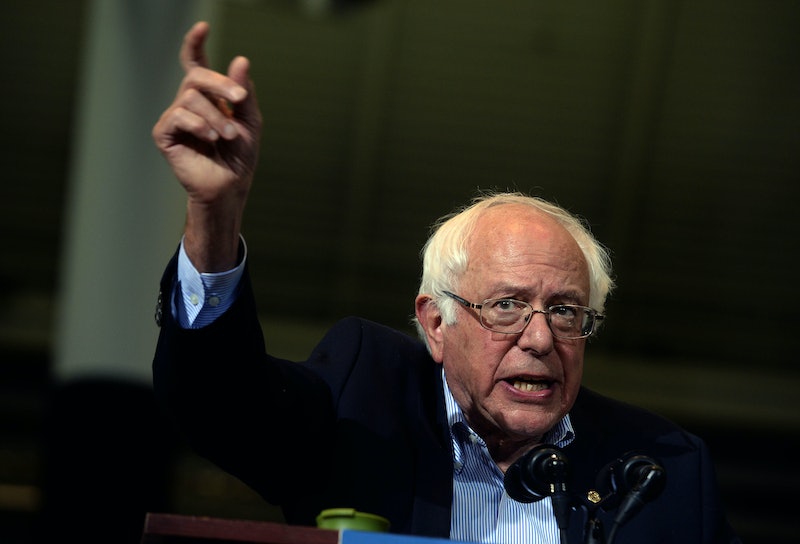 The first Democratic presidential debate is nearly upon us, and it's starting to get exciting. After all, the Democratic side doesn't get nearly as many shots at this sort of thing as the Republicans do — they've only scheduled six debates to the GOP's 12, which has rankled underdog candidates like Vermont Senator Bernie Sanders. It'll be fun to finally see them all up there, and maybe you'd like to get familiar with some of their unique views, for instance: which Democratic debate candidates most want to legalize marijuana?

Theres no guarantee whether it'll come up during the debate, although it's a question that sparks clear interest and enthusiasm among some voters. It's not just a question of the right to use recreational drugs, in many cases, but also reflect a candidates' broader opinions on the war on drugs, and mass incarceration of non-violent offenders. Basically, it's a hugely significant policy matter that doesn't always get the respect it deserves — even President Obama laughed it off back in 2009, in a manner that annoyed some proponents of drug policy reform.

So, if the candidates are asked about marijuana, what will they say? And if they're not, what can you conclude about their positions based on their past comments? Here's a rundown.

Look, you probably don't know much about Jim Webb. He briefly retired from political life in 2013, after six years as Virginia's Democratic senator, and now he's back mounting a long-shot bid for the presidential nomination. He's also hinted at openness to a huge change in drug policy — as the Huffington Post detailed back in July, he promoted the cigarette model of drug-avoidance policy at the National Sheriff's Association Conference, saying: "We didn't make cigarettes illegal. We just got the information out there and educated people about the potential harm."

Needless to say, this would be a dramatically different state of affairs from what we have today — cigarettes are entirely legal for recreational use, and indeed, the public health campaigns Webb is talking about have been massively successful at lessening smoking through the years. If he were to make a pro-legalization remark during the debate, it could help net him some of the attention he desperately needs.

Chafee, the Republican-turned-Democrat and former Governor of Rhode Island, has been up front about the fact that his marijuana views are still forming over time, which could just as well mean that he's waiting to see how the political winds blow. But the place he's starting from sounds promising indeed: he decriminalized possession of small amounts of marijuana while governor, and he's publicly open to the regulation and taxation of the drug.

During an appearance on HuffPost Live earlier this year, he said "let's take it step by step on full legalization of marijuana, though; we want to see how it's working in Colorado," and admitted that "the revenue is enticing for all governors." It'll be interesting to see if he makes this case during the debate — he's the only former governor in the race who's said something so receptive.

Sanders is an odd case as far as this issue goes — he's admitted to marijuana use in his youth, he's been a notable critic of the drug war, and he supported the decriminalization of possession of small amounts of marijuana, just like Chafee.

However, he's also admitted that he doesn't think it's a major issue facing the country, which is the kind of double-standard that can rankle proponents of legalization. To invoke the harm caused by the war on drugs on the one hand, including decades of lives lost to non-violent, drug-related incarceration, and then downplay the significance of the issue on the other, can frustrate people.

I’m going to look at the issue. It’s not that I support it or don’t support it. To me it is not one of the major issues facing this country. I’ll look at it. I think it has a lot of support and I’ll be talking to young people and others about the issues. But there are two sides to a story.

That's not to say he's opposed to legalization, to be clear — he told Time that "it's not that I support it or don't support it" — but the additional admission that it's not a priority makes it tough to figure out where he should fall on this list, and how exactly he'll tackle the question if it comes up on Tuesday night.

Clinton is not, sad to say, a terribly consistent candidate on marijuana — she's expressed an openness to state-level legalization, calling the states "the laboratories of democracy," but she also expressed doubts about the efficacy and safety of medical marijuana, during a 2014 CNN interview.

Well, at the risk of committing radical candor, I have to say I think we need to be very clear about the benefits of marijuana use for medicinal purposes. I don't think we've done enough research yet, although I think for people who are in extreme medical conditions and who have anecdotal evidence that it works, there should be availability under appropriate circumstances. But I do think we need more research because we don't know how it interacts with other drugs.

There are entirely reasonable political reasons why Clinton might not wish to emphasize — she's running firmly within the center of the Democratic Party, and the Clinton brand has often played somewhat cautiously on historically contentious social issues. She's also previously referred to marijuana as a "gateway" drug, a time-worn line built on little concrete evidence.

Martin O'Malley is yet another hard-to-figure case — although he did sign medical marijuana into law in Maryland, and decriminalized possession of small amounts of marijuana, he's previously expressed a pretty strident personal opposition to its use. In a pair of radio interviews in 2014, as detailed by the Washington Post, O'Malley also called it a "gateway" drug that could lead to "even more harmful behavior," and opposed outright legalization, saying he was "not much in favor of it."

But things seem to have turned around a little bit recently, which is often a sure sign that a candidate knows they need to find some kind of single-issue foothold to gain some traction. Despite still not being in support of full, recreational legalization, O'Malley's clearly been giving more time and consideration to the issue, and assertively touting his marijuana reform record while governor.

In a sense, he might be the candidate best-equipped to make a splash on this issue — if he wanted to seize a huge amount of attention with a landmark moment in the debate Tuesday night, which he definitely needs to do, he could accomplish it by coming out for recreational legalization.