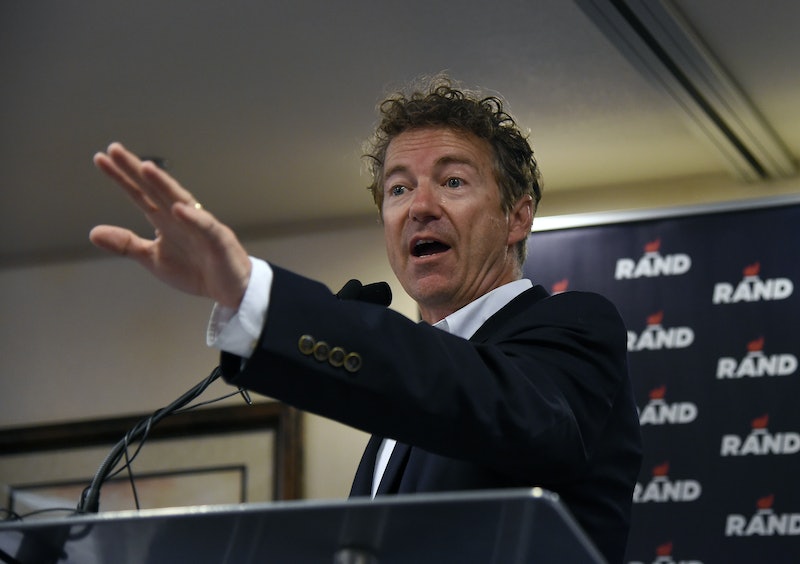 Earlier this week, Rand Paul received backing from somebody who most politicians would want to avoid — an infamously inflammatory, controversial figure on the American fringe. As detailed in a report by The Daily Beast's Olivia Nuzzi on Wednesday, Texas-based radio host and conspiracy theorist Alex Jones has endorsed Rand Paul, in one of the most intriguing developments of the Kentucky senator's campaign so far.

According to Nuzzi, Jones endorsed Paul's campaign in the form of a text message, first stating that Hillary Clinton is "too corrupt and evil," that "Rand Paul for sure" was not, and saying he'd "watched him for a long time and know him."

It actually makes perfect sense that Jones would consider Paul his candidate of choice — he's interviewed the senator before, which is actually what makes the story interesting. In most cases, even if one of the most prominent conspiracy theorists in the world voiced support for a candidate, you could fairly argue against guilt by association. But Paul (as well as his father Ron), have both been involved with Jones before, and it could be an issue for his campaign.

Back in April, Paul was asked about his history with Jones in an interview with Bloomberg News, which he characterized as an unremarkable effort for him to get his views out to the public.

It's important to bear in mind just how wild-eyed, offensive, and controversial some of Jones' statements and beliefs are, by any mainstream political standards. He's a 9/11 truther, he's a Barack Obama birther, he's concerned about "chemtrails," he'll tell you all about the FEMA camps that will someday become our permanent homes, he thinks the Sandy Hook Elementary School shooting was staged, and of course, the Boston Marathon bombing was, too.

Jones first played host to Paul back in 2009, back before the latter had even been elected to the Senate. The appearance was controversial right off the bat, and it makes you wonder if Paul wasn't necessarily banking on running for president someday when he did it — he raised the spectre of martial law to enforce mandatory vaccinations, a harbinger of more controversies to come. Since the start of his presidential campaign, Paul has continued to oppose mandatory vaccination, though he no longer warns that we might face marital law over it.

It's possible that you've seen Jones on your television before, in spite of the fact that he's as far from a mainstream figure as it gets — he's occasionally made it onto higher-profile platforms in the media landscape, he's been particularly vociferous on the matter of gun control and the Second Amendment, getting into an infamously angry shoutfest with former CNN host Piers Morgan, and exploding during a BBC appearance.

If Paul indeed considers his old chats with Jones a potential political liability, he's not getting any favors from his dad, either. Ron Paul, the former Texas congressman and grassroots libertarian-right presidential candidate, appeared on Jones' show as recently as July.