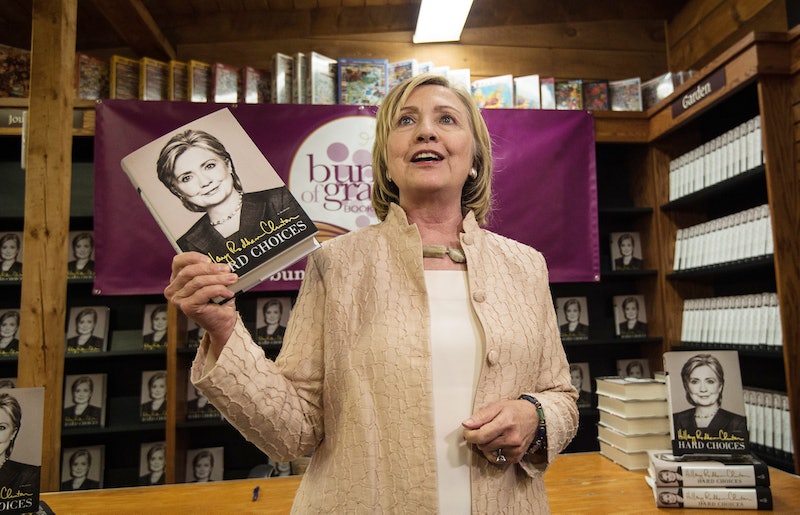 Ben Carson and his campaign staffers know it's polite to say "thank you" when you receive a gift, but their video thanking Hillary Clinton for a copy of Hard Choices, the Democratic presidential front-runner's most recent book, isn't exactly a heartfelt expression of gratitude. In fact, it's a fairly snarky response, but one that I suppose is fitting given that Clinton's decision to send her book to the entire field of Republican presidential hopefuls in response to criticism about her time as secretary of state was pretty cheeky in itself. ABC's Liz Kreutz tweeted out the letter that accompanied the books, and in it, Clinton quipped that she "thought [they] might enjoy reading Hard Choices" since they'd been "questioning [her] record of accomplishments." She couldn't resist a quick (yet accurate) jab at the supersized group, saying, "With 15 candidates in the race, you've got enough people for a book club!"

Based on the responses so far, like "Dr. Ben Carson 'Thanks Hilary,'" the YouTube video posted by Carson's camp on Oct. 9, the book club will not come to order, well, ever. In the video, Carson staffers show the "good use" they've put Hard Choices to so far, and they've been doing just about everything with the memoir besides reading it. The book functions as a coaster, a step stool, a makeshift laptop stand, and more. To be honest, though, Carson's politics aside, it really only merits a "meh" — no real laughs. I may, however, be 100-percent biased in that I adore books too much to see them mistreated. When one staffer drags the book through a poorly cleaned up coffee spill and another puts her shoes on it, I just... I can't. I cringe.

Rand Paul may not have liked the book any more than Carson did, but points to him for being entrepreneurial enough to auction it off — for wait for it — $13,100. By scribbling a sassy inscription in it and putting it up on ebay, he turned what he thought were lemons into a fountain of lemonade. More campaign funds, right?

Carson's video has racked up over 261,000 views (at the time of publishing), though, so I suppose I can't fault his campaign's ability to create some buzz with it. Watch the video below. (Warning: The content may be disturbing to Hillary fans and book-lovers.)