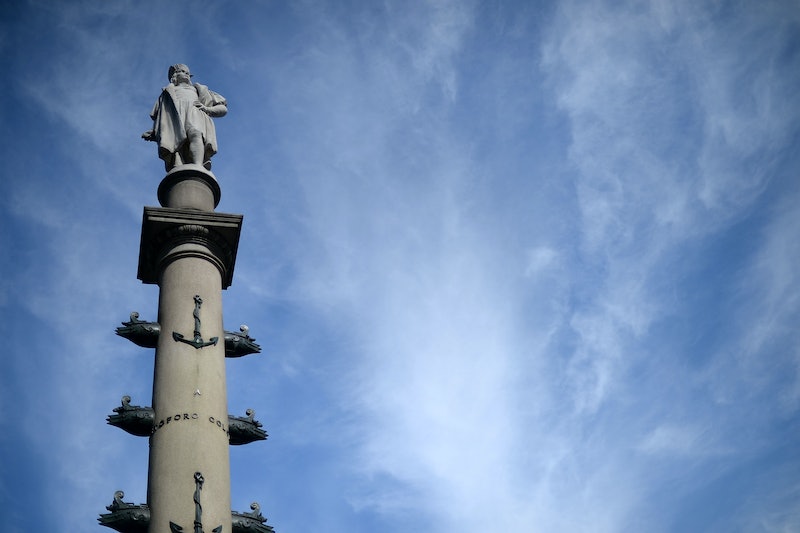 Christopher Columbus isn't as great as your third grade history class painted him to be. Columbus didn't prove that the Earth was round, he didn't discover the U.S., and — I hate to break your heart — his ships were not named the Niña, the Pinta, and the Santa Maria. Protests against Columbus Day over the last few years have also made it clear that he wasn't a generous or gentle explorer in his interactions with the indigenous people who lived in Central and South America. Sure, Columbus might not have known that enslaving indigenous people isn't cool or that his journey would wipe out entire indigenous populations with disease, but we know better. Because we know better, we shouldn't be celebrating Columbus with a national holiday. Taking off work for Columbus Day is insensitive to the plights of indigenous people, even if you just want to use it as an excuse to have a long weekend.

Who was Columbus, really? He was an explorer who was bent on proving that the Earth was round and that he could reach Asia if he sailed west from his home in Spain. What he actually found when he sailed west, though, was the Caribbean. He did trade with indigenous people, receiving chocolate in exchange for wheat, for example. But he also brought over the bubonic plague, chicken pox, cholera, malaria, measles, and typhoid, according to The Washington Post. Even worse, on his first voyage, Columbus captured indigenous men, women, and children and forced them to return to Spain with him, according to The Telegraph. Most of them died on the voyage and the rest were dead within six months of arriving. In his next three voyages, he brought back more indigenous people, many of whom died during the journey or in Spain as slaves.

During his second voyage, he brought soldiers to help him find gold, according to The Telegraph. Bartolomé de Las Casas, an eyewitness who later fought for the Native Americans' rights, said the scene was one of rape, torture, and greed:

...Whenever the Spaniards found them, they pitilessly slaughtered everyone like sheep in a corral. It was a general rule among Spaniards to be cruel; not just cruel, but extraordinarily cruel so that harsh and bitter treatment would prevent Indians from daring to think of themselves as human beings or having a minute to think at all. So they would cut an Indian's hands and leave them dangling by a shred of skin and they would send him on saying "Go now, spread the news to your chiefs." ... They burned or hanged captured chiefs.

And Columbus wasn't an out-of-the-ordinary do-gooder in this scene. US-History.com said that Columbus' rule of the Caribbean Islands was brutal: "Yet even his most ardent admirers acknowledge that Columbus was self-centered, ruthless, avaricious, and a racist." On Oct. 14, 1492, just two days after he set foot in the Caribbean, Columbus wrote in his journal in reference to indigenous people: "With fifty men they can all be subjugated and made to do what is required of them," according to a 1906 reference book cited by Understanding Prejudice.

Why was he like this? Because he was trying to "improve" the lands through Catholic indoctrination and domination. Sure, Columbus didn't know that pushing your religion on others isn't cool. (Hell, we still have trouble with that one.) And, in his time, slavery seemed like a natural social organization. But now we know better. We know that enslaving people isn't OK, and we know that conquering lands under the guise of "exploration" is not acceptable. And we know that horrid crimes against people are cause enough to strip someone of their celebration under a national holiday.

David M. Perry, an associate professor of history at Dominican University in Illinois, wrote a column for CNN in which he explained his struggle to tell his young daughter who Columbus really was. Perry said it's "OK to be impressed by" Columbus' bravery:

I don't know if that's a reason to have a school holiday, exactly, but it's definitely worth remembering.

So, I hear the justification almost every Columbus Day: "Well, yes, I know that Columbus wasn't a great person, but I'm not endorsing what he did by taking the day off and having a long weekend. I just want a long weekend, and it is still a federal holiday." First, it's pretty clear that it shouldn't be a federal holiday. Parts of California and all of South Dakota, Alabama, and Hawaii celebrate some version of an indigenous peoples day instead. Even Spain, the country Columbus sailed for, doesn't celebrate Columbus specifically.

Second, the problem with taking the day off even though you don't support Columbus' actions is that you're still willing to look past slavery and what some call genocide in order to get an extra day off. That might seem harsh, but that's the brutal truth for thousands of indigenous people who were slaughtered or enslaved by the guy that we thank for our long weekend. And sure, maybe you aren't endorsing Columbus by taking the day off, but you aren't speaking out against the holiday either. When we take Columbus Day off, we're saying it's acceptable to mutilate a population of people as long as you do something brave. But Columbus' horrible decisions should speak louder than his bravery.

Likewise, our actions speak louder than our excuses. Silence is too often taken as acceptance of the status quo, even if we don't mean it to. We should stop giving excuses for Columbus and his "holiday" just so we can spend more time on the couch.

More like this
Chris Kaba's Family Continue Fight For Justice After Viewing Police Bodycam Footage
By Sophie McEvoy
Women Around The World Are Cutting Their Hair In Solidarity With Mahsa Amini
By Darshita Goyal
An Honest Review of MeUndies Boxers, According To A Non-Binary Person
By Megan Lasher
Androgynous Formal Wear That Will Make You Feel *So* Fancy
By Megan Lasher
Get Even More From Bustle — Sign Up For The Newsletter