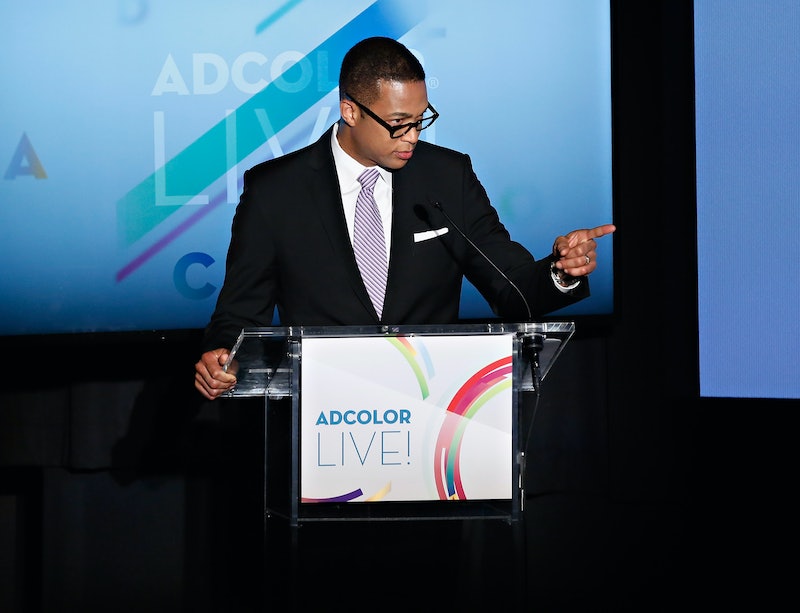 The first Democratic presidential debate is just around the corner. It will take place Tuesday night at the Wynn Las Vegas, and will be hosted by CNN. Anderson Cooper will act as primary moderator, asking questions to the five candidates alongside fellow CNN journalists Dana Bash and Juan Carlos Lopez. Also joining the hosts will be colleague Don Lemon, whose primary task is to ask Facebook-submitted questions from voters themselves. The Tonight with Don Lemon host is known more for his gaffes than his hard-hitting journalism. Though he'll be playing a small role in moderating, it will be hard not to pay especially close attention to him. These awful Lemon quotes will have you wincing at his every appearance.

Lemon has been a controversial figure on CNN fairly consistently over the course of his tenure with the network. His most recent offense came in June, in the wake of the decision to remove the Confederate Flag from the South Carolina state capitol after the Charleston shooting. Lemon hosted a deliberately provocative episode of his show, which began with him at first holding up the flag and asking viewers if they were offended. He then followed it up by holding up a sign emblazoned with the n-word and asking the same question. Lemon's prompt for the second sign was President Obama's use of the word during an interview on Marc Maron's WTF podcast. Predictably, Lemon incurred major backlash. Though perhaps the most visually striking of his many gaffes, the segment certainly doesn't mark the only time Lemon has come under fire for his on-air behavior.

Lemon provided extensive on-the-ground coverage for CNN during the many protests held in Ferguson following the shooting death of Michael Brown. His firsthand account of the demonstrations unfolding after it had been announced that officer Darren Wilson would not be indicted by a grand jury included a rather strange detail about how the scene itself smelled, in addition to what had transpired. The unnecessary comment elicited angry tweets from the likes of Russell Simmons, and even fellow journalists. Lemon said:

We heard a gunshot and people started scattering. We’re watching people, they’re on top of the roofs of cars, the tops of cars. And obviously, there’s a smell of marijuana in the air as well.

Guessing The Whereabouts Of The Missing Malaysia Airlines Plane

Lemon's coverage of missing Malaysia Airlines Flight 370 proved to be some of his most mocked material, helping to land him on the The Columbia Journalism Review's "worst journalism of 2014" list. His first cringeworthy quote came during a Sunday broadcast, when he hypothesized that the plane's disappearance may have been a supernatural event or simply an act of God:

Especially today, on a day when we deal with the supernatural. We go to church, the supernatural power of God. People are saying to me, why aren't you talking about the possibility — and I'm just putting it out there — that something odd happened to this plane, something beyond our understanding?

Letting His Viewers Do The Talking

The journalist continued to delve even deeper into conspiracy theories about Flight 370, reading tweets from viewers suggesting that the plane had disappeared because of the Bermuda triangle or a black hole. Some viewers even compared the developing news of the lost aircraft to the television show Lost. Surprisingly, Lemon took these guesses seriously, and even asked former U.S. Department of Transportation inspector general Mary Schiavo whether she believed any of those theories. Lemon said:

What if it was something that we don't really understand? A lot of people have been asking about that, about black holes, and on and on.

Lemon interviewed Human rights lawyer and senior editor of The Islamic Monthly Arsalan Iftikhar shortly after the Charlie Hebdo attacks to gain an expert perspective on the situation. Despite the attorney vehemently condemning the attack, Lemon took the time to ask whether Iftikhar supports Muslim extremism. Iftikhar was so incredibly offended by the question that he penned an essay about his experience, calling the journalist "blatantly tone deaf." Lemon said:

In August, 16 percent of French citizens support ISIS. Would you describe those who support ISIS as Islamic extremists? Do you support ISIS?

Last year, Lemon interviewed journalist and music publicist Joan Tarshis about her allegations against Bill Cosby. Tarshis was one of countless women to accuse the comedian of sexual assault. During her interview with Lemon, he not only asked why she didn't approach law enforcement sooner, but also suggested that she should've bitten Cosby as a way to potentially stop the attack from continuing:

You know, there are ways not to perform oral sex if you didn’t want to do it ... Meaning the using of the teeth.

Misidentifying His Own Gun Purchase

Lemon made a mistake while continuing to cover demonstrations in Ferguson. During an interview with conservative radio host Ben Ferguson, Lemon tried and failed to highlight the fact that acquiring dangerous weaponry in the United States is surprisingly easy by claiming that he acquired an automatic weapon. It soon became apparent that he did not know what sets a semiautomatic weapon apart from a fully automatic one. Ferguson said that, "to imply that anyone can walk out and buy an automatic weapon is just not true," as fully automatic weaponry is nearly impossible to legally obtain. Lemon responded:

For me, an automatic weapon is anything that you can shoot off a number of rounds very quickly. I was able to buy an AR-15 in 20 minutes.

Shockingly, Bill O'Reilly and Lemon have something they both can agree upon. Following the deadly shooting of Trayvon Martin, O'Reilly said that "the reason that there is so much violence and chaos in the black precincts is the disintegration of the black family." Lemon not only sided with the Fox News pundit, but also unveiled his own list of offensive ways to help the African-American community. The five-point list perpetuates stereotypes about the black community, including the usage of the n-word and sagging pants. Lemon said:

Respect where you live. Start small by not dropping trash; littering in your own communities. I've lived in several predominantly white neighborhoods in my life. I've rarely if ever witnessed people littering I live in Harlem now. It's an historically black neighborhood. Every single day I see adults and children dropping their trash on the ground when a garbage can is just feet away.