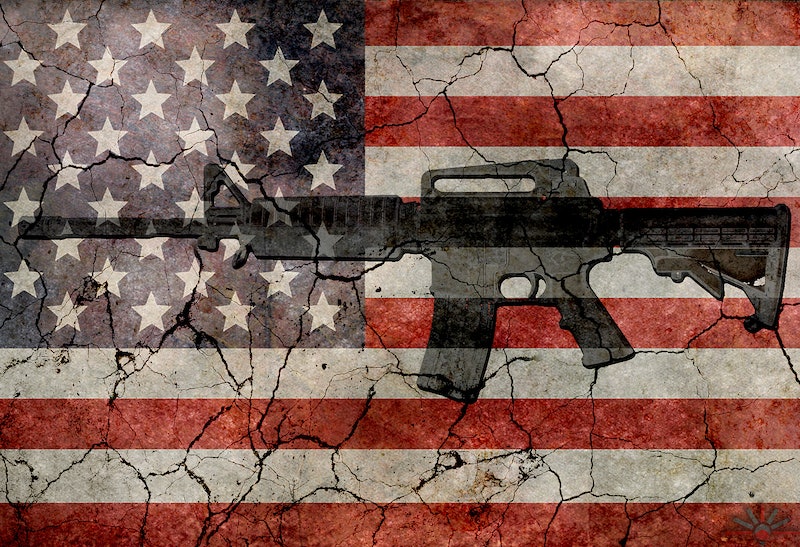 After months of hearing about (and from) the competitive, overcrowded Republican ballot for president, on Tuesday, the attention will turn to the Democratic side of the race. The five current candidates — Hillary Clinton, Bernie Sanders, Martin O'Malley, Jim Webb, and Lincoln Chafee — will take the stage for their first debate, hosted by CNN. While they have the country's attention, there is one issue which we absolutely need the Democrats to talk about during the debate: gun control.

So far this year, there have been nearly 50 school shootings across the country, with incidents at Northern Arizona University, Texas Southern University, and Umpqua Community College happening as recently as the past couple weeks. Despite the continued violence and increasing death toll, gun sales continue to rise and gun stocks continue to perform well. After each incident, politicians are quick to talk about solutions — whether they support gun control, mental health reform, or some other strategy — yet we still lack significant and sufficient change.

This time, though, we shouldn't have to settle for plain old talk. There's an election going on, and more than a dozen people are campaigning for the job of president. If now is not the time for us to put the pressure on these and other politicians, then I don't know what is.

For their part, some of the candidates have been particularly vocal about gun control in the days leading up to the debate. Following the shooting spree in Oregon, Clinton laid out her plan for gun control, which includes universal background checks, restrictions on who can buy guns, and enhanced inspections of gun sellers, among other things. Sanders, who has typically taken a more moderate approach to gun control than many of his Democratic counterparts, has also described a plan. In it, he calls for universal background checks and a ban on assault weapons, which he says "have no other purpose but to kill people."

The remaining candidates have been less vocal. Webb in particular is known for a relatively conservative-to-nonexistent approach to gun control. Similarly, Chafee hasn't seemed to make guns much of a priority, although his campaign website states that he vows to protect the "personal liberties guaranteed in the Constitution." He doesn't include the right to bear arms in this discussion directly, but makes for an interesting paradox if he comes out vehemently against gun ownership. Finally, O'Malley has taken some opportunities to address gun violence, setting a goal of cutting gun deaths in half in just 10 years.

No matter what solution you support, it's time we all agree that gun violence needs to be addressed with more than just words. It's likely that gun control will come up in the debate. During the most recent GOP debate, CNN's moderators made it known that they wanted to ask candidates tough questions that would push their buttons. This time around, tough questions on gun control could lead to deeper looks into the candidates' positions, as well as promises that we can only hope the candidates would keep when elected.