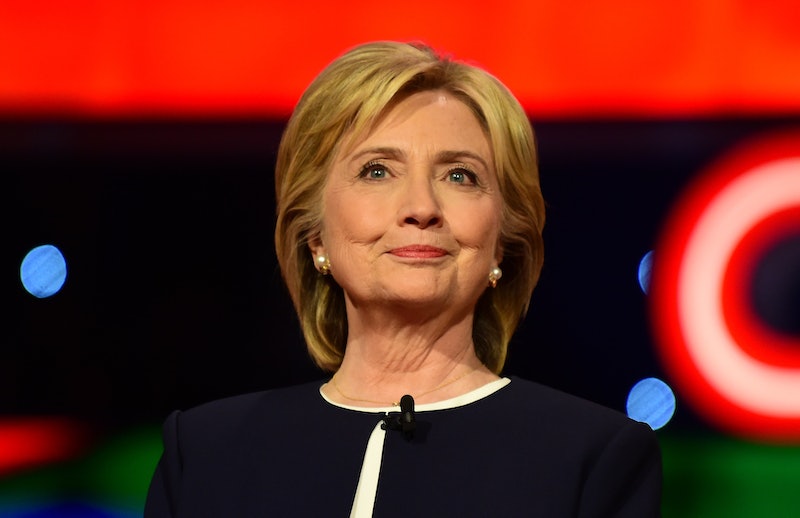 Hillary Clinton is a powerhouse when it comes to delivering sound bytes that make you listen. The first Democratic debate on Tuesday night has been full of back and forth between the candidates and tough questions from the moderators, but Clinton showed up with several thought-provoking truth bombs in her arsenal. With Clinton's quotes from the first Democratic debate, she has had several opportunities for a classic mic-drop.

Whether she's in front of a panel of moderators or the United Nations, Clinton makes her priorities known through memorable quotes. For instance, back in 1995, she made a powerful plea to the world on behalf of women when she spoke at the U.N.'s Fourth World Conference on Women and delivered this memorable gem.

During this campaign, Clinton has focused on her usual priorities: women's reproductive rights, LGBT rights, and education, among others. Many of her recent words have also had to center around the ongoing email scandal and criticism from both the right and the left. At the debate, in particular, she fielded questions about the expected hot topics, like her flip-flopping on issues and her track record in government, but not without getting some pretty important quotes in on the issues.

Finally, fathers will be able to say to their daughters: You too can grow up to be president.

This quote came from Hill's opening statement, in which she talked about her baby granddaughter.

Moderator Anderson Cooper asked Clinton whether she was a progressive or a moderate. She shot down the inevitable criticism from the left immediately with this straightforward zinger.

He valued my judgment, and I spent a lot of time with him, in the situation room, going over some very difficult issues.

Lately, Clinton has seemed to distance herself from her former boss, particularly on the new Trans-Pacific Partnership trade deal. At the debate, she spoke respectfully about him but clearly wanted to make a distinction.

Being the first woman president would be quite a change.

Cooper later asked each candidate how he or she would be different from a third term of Obama. Clinton pointed out the obvious (her gender) and played to one of her priorities (gender equality).

Seemingly upset about his lack of speaking time, Jim Webb interrupted Cooper while he was asking Clinton to respond to a question. Clinton shut him down immediately.

I was very pleased when Governor O'Malley endorsed me in 2008, and I enjoyed his strong support in that campaign, and I consider him, obviously, a friend.

It wasn't all fighting words on the stage on Tuesday. Clinton also respectfully spoke about her contender from Maryland. Do I see a potential running mate on the horizon?

Unless you believe the United States should not send diplomats to any place that is dangerous, when we send them forth, there is always the potential of danger and risk.

Oh, Benghazi. The unfortunate story following her around that has only been dwarfed ever so slightly by Clinton's email scandal. Clinton can't seem to escape criticism for it, but at the debate, she had a firm answer for it.

Let's just take a minute here and point out that this committee is basically an arm of the Republican National Committee. It is a partisan vehicle ... to drive down my poll numbers. Big surprise. ... I am still standing. I am happy to be part of this debate, and I intend to keep talking about the issues that matter to the American people.

We knew this was coming. Clinton took a massive swing at the Republican Party with her answer to the inevitable email question — and she shined with her resilience.

Clinton bluntly told Cooper that she didn't want to respond to the other candidates' comments about her emails. Clinton's simple "no" make the audience cheer a resounding "yes."

On Her Political Party

It's no surprise that Clinton threw some shade at the Republican Party during the debate, but she didn't stop there. When asked about how she would approach the economy, Clinton took the opportunity to endorse her entire party. Whether you agree with her economic platform or not, it's nice to know she stands behind her entire party, especially in an increasingly competitive race.

I'm not taking a backseat to anybody on my values, my principles, and the results that I get.

Clinton has never been one to let another person put her in her place. She's a champion for women's rights, gay rights, and the rights of all — and she wants you to remember that.

It's always the Republicans or their sympathizers who say, you can't have paid leave, you can't provide healthcare. They don't mind having big government to interfere with a woman's right to choose and to try to take down Planned Parenthood — they're fine with big government when it comes to that.

This bold commentary from Clinton raised possibly the loudest cheer of the night from the debate's in-person audience (and from people at home on the couch, no doubt). It took surprisingly long for Planned Parenthood to come up, but once it did, Clinton knew exactly what point she wanted to make.

For too long, issues affecting women — from reproductive rights to paid leave — have been dismissed as "women's issues." Those days are over.

This zinger is reminiscent of so many other of Clinton's gem one-liners. Back in the 1990s, Clinton proclaimed that women's rights are human rights. Today, it's sad that she still has to make that point, but I'm glad she does.

On The Enemy She's Most Proud Of

The Iranians. Probably the Republicans.

Clinton has made her fair share of enemies, that's a given. When asked which one she's most proud of making an enemy out of, she had a few to mention, including these noteworthy groups.

At Tuesday night's debate, Clinton delivered, as she often does, with memorable quotes. She closed with a resounding anthem of her platform as well, saying, "If you work hard and you do your part, you should be able to get ahead and stay ahead." Here's to another batch of Clinton-inspired motivational posters.