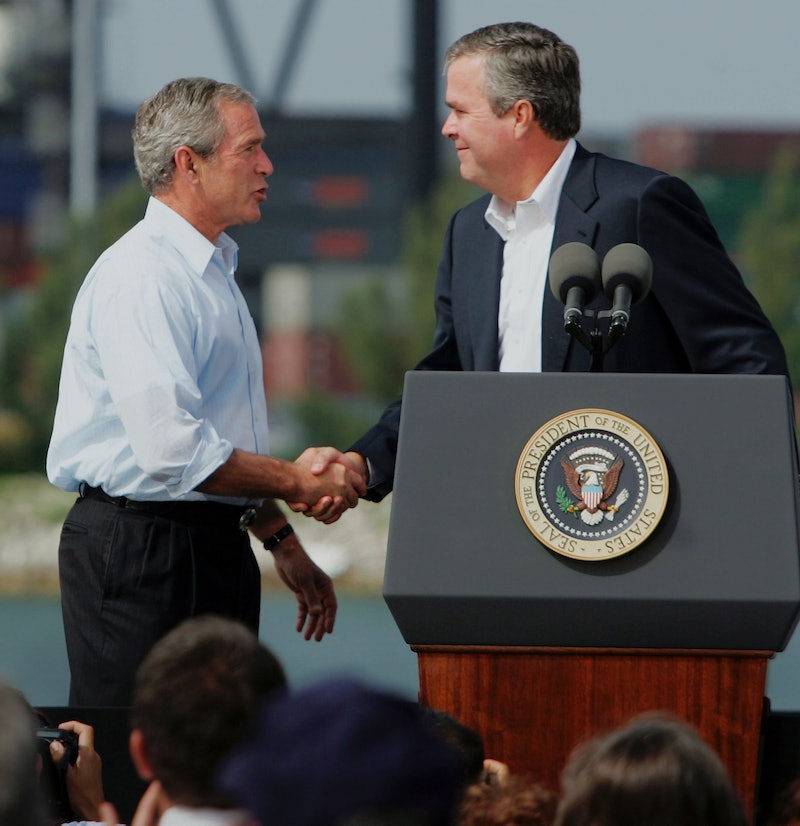 This Halloween, take your relationship to new #goals with a couples' costume that isn't "sexy firefighter and damsel in distress." From the campaigns to the Supreme Court, today's landscape is ripe with opportunities for political couples' Halloween costumes. Think outside the box of Hillary and Bill — although the Clintons are definitely relevant — and maximize the creativity in your relationship's Halloween celebration.

Maybe you're a die-hard Republican and your significant other is a little more liberal. Maybe you're struggling to remember all of the candidates' names and your significant other has set up Google alerts for each and every one of them. Maybe you're just doing Halloween with your best friend because boys suck but politics don't. No matter what your political preferences are or what your relationship status is, there's a couples' Halloween costume for you and your beliefs.

Don't get me wrong, the Clintons make for a good go-to Halloween costume. After all, you can learn to dress and act like them by watching enough Saturday Night Live. But with so much new in politics right now (Donald Trump and the legalization of gay marriage, for instance), it might be time to venture beyond the go-to costumes.

OK, so they're not a "couple," but they are a couple of ever-relevant political figures. If summers in Kennebunkport and living up to a family name are your thing, then George W. and Jeb are the way to go for sure. If you want to turn it into a double-date, take it even further and add Laura and Columba to the mix as well.

Step 1: Start with the typical Bush outfit — khakis, a blue button-down shirt, and a navy blue blazer. Hopefully, you and your significant other already have some of these items. You'll also need a gray wig. George W.'s hair is definitely grayer than Jeb's, but if he's headed to the White House, he's sure to catch up to his older brother in no time. Try this one from Amazon:

Step 2: Once you've got similar outfits and wigs, you've got to distinguish yourself from each other somehow. As Jeb is currently campaigning, he'd most likely be wearing his campaign logo on his chest whenever possible. Check out this lapel pin from his campaign:

George W., on the other hand, can already don this POTUS lapel pin:

Step 3: Master the handshake. For some reason, the Bush brothers are often photographed going in for a firm handshake. Work such a pose into one of your Instagram-worthy photos during the night.

Step 1: The Republican needs an elephant costume. Feel free to DIY this one if you want, or you can go with a full-body suit costume like the one below. Add a red T-shirt for greater effect.

Step 2: The Democrat needs a donkey costume, like the onesie-style suit below. (Also, if you think these costumes look silly, at least you'll be silly together, right?) Just as with the elephant, a blue T-shirt can be added for more of an effect.

Step 1: Pick who will be America and who will be Cuba. America should wear a patriotic outfit, possibly including this flag-print button-down:

Step 2: Cuba should wear a similar shirt, but obviously more patriotic for Cuba. Here's a good example from Zazzle:

Step 3: Act like you just became best friends or just started dating! Don't be annoying, though — no one likes that couple, whether a clever political costume is involved or not.

In case you hadn't heard, Trump is really rich. He has made a point of telling us that over and over throughout his campaign. What would Trump be without his money? He would be like you without your other half.

Step 1: To perfect Trump's look, you'll need a simple suit of dress pants and a blazer, a white shirt, and a red tie. You'll also need a Trump-like wig — because as much as Trump's money is a part of his identity, his comb-over is equally characteristic. Here's a wig that will work perfectly:

Step 2: Add some Trump extras. A "Make America Great Again" hat would complete the look as only Trump can. The only problem is that you might have to order it from Trump's campaign, but it's not like he needs the money.

Step 3: Believe it or not, the money costume can be surprisingly easy. You could DIY it with some Monopoly money and fabric glue, or you could just get this $100-bill costume from Walmart.

5. The Legalization Of Same-Sex Marriage

Despite all the recent drama with one Kim Davis, love has won over this year thanks to the Supreme Court's decision to legalize gay marriage. If you have an outfit that you've worn to a local Pride event, then you're already halfway there.

Step 1: One person will play the role of same-sex marriage. Start with any rainbow clothing of your choice. This rainbow dress from Amazon would work well:

Step 2: To give the rainbow look a "marriage" flair, add a veil or a bouquet (or both!). You can pick up this veil from Amazon while you're getting the rainbow dress:

Step 3: You might already have a go-to Pride outfit, but chances are you don't have a Supreme Court justice's costume in your closet. To embody SCOTUS, you'll need a long, black robe (a black graduation gown could work if you've got one of those handy). The one below comes from Amazon, so buy both costumes all at once to make things easier. If you have a gavel by chance (don't we all?), carry that, too!

If you're already feeling disillusioned from this election, look forward another few years to 2020, when Kanye West has suggested he will run for president. Prep for the ordeal by dressing up as the nation's potential first family: Kimye.

Step 1: Choose your favorite Kimye look to emulate. (Here are a few ideas with DIY tutorials.) You can get two leather jackets and write "Just Married" on the back of them, you can go full-glam for the viral wedding photo, or you can turn Kimye's own Halloween costume of The Little Mermaid into your very own Halloween costume. If you want to go with the leather jacket look, here's an inexpensive jacket from Party City to get you started:

This costume works well for couples with noticeable differences in height (Yay for tall girls! Yay for short girls!). The poll you represent can really be anything you want, but if you're looking to keep it within the theme of the election, then go with a simple Republican vs. Democrat breakdown.

Step 2: Using a fabric marker, write a percentage on your outfit. (If it's an outfit you'll want to wear again sans percentage, then use safety pins to attach a piece of paper with the percentage on it to you.) It's best if the percentage represents how tall you are in relation to your partner. If you are near the same height, for instance, make the percentages close to 50-50.

Political costumes make for good conversation starters, particularly when there's a duo of costumes to talk about! Rep your favorite candidate or embody your favorite law, just please keep it politically correct. In other words, stay away from this sexy Trump costume.