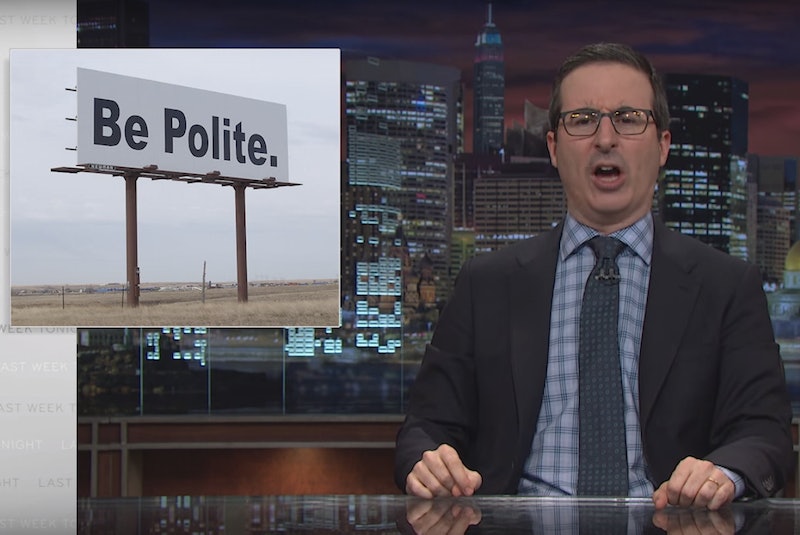 In the Sunday's episode of Last Week Tonight, John Oliver investigated North Dakota and its oil boom, which has led to both benefits and severe consequences for the state and the country. North Dakota was once the polite Midwestern state that you vaguely knew as "South Dacanada." But the boom that came with the increased extraction of oil from the Bakken Formation, a 200,000-square-mile rock unit located in the northwestern section of the state, also comes on the backs of beleaguered North Dakotans.

Of course, that kind of mass drilling would obviously affect the environment. Oliver quotes a New York Times study that found more than 18 million gallons of oils and chemicals spilled or leaked during the extraction process. Most were contained to the immediate drilling area, the outlet reports, but some still poured into surrounding farmlands and fields.

Worker deaths are another major issue. Someone dies in the Bakken oil fields every six weeks on average, a rate only suited for soap operas, Oliver says. The high demand also leads to precarious work conditions, such as one employee who claims he once worked 69 hours straight. Occupational Safety and Health Administration is the federal agency responsible for overseeing worker safety, but resources are strained.

In one example, one man and three others were injured in an explosion at an oil field owned by Oasis Petroleum. In the end, the company wasn't found at fault because it had used subcontractors instead of hiring actual employees to work its fields, meaning they legally were not liable for on-the-job incidents.

The financial gains that came with the oil boom has made the state incredibly friendly with oil companies. Oliver blasts a pre-taped North Dakota Gov. Jack Dalrymple for inviting oil corporations to set up shop in the state with the promise of low taxes and light regulatory oversight.

He's making North Dakota sound like a magical pro-business utopia, like Willy Wonka's chocolate factory, which, come to think of it, had about the same safety record as North Dakota's oil fields.

Regulatory oversight in North Dakota is pretty loose, but is that surprising? After all, oil is the top political contributor in the state. Even when companies, like Continental Resources or Petro-Hunt, are fined for massive oil spills, checks are typically at 10 percent of the actual penalty, a form of "probation" for good behavior.

As Oliver points out, though, the relationship between oil and politics has also led to a surprising admission by one representative that leftover campaign funds would then become "income." Turns out, North Dakota doesn't have an ethics committee, Oliver says, which means, "FIFA just found the location of its new international headquarters." It's so lax that even Texas outpaces North Dakota in oversight.

Oil companies need to be held accountable, according to Oliver, which is why North Dakota, despite all its politeness, needs to lay down the hammer and increase its regulation on these corporations.