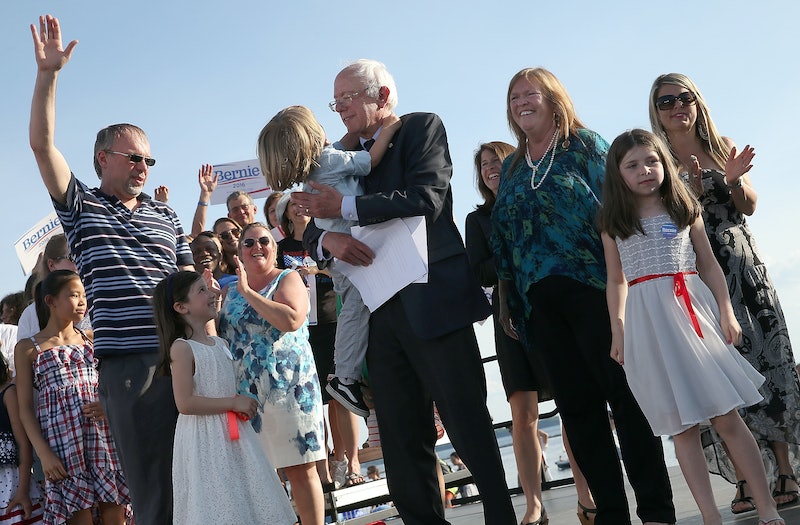 Ever since he announced his candidacy for president, Bernie Sanders has enjoyed widespread public support, drawing tens of thousands of people to his rallies with his anti-Wall Street rhetoric. That kind of national exposure will, of course, bring the critics out. There's been increased attention toward Sanders' first son, Levi Sanders, and the role he plays in his father's life.

According to Levi's LinkedIn profile, he currently works as a social security disability insurance senior analyst at Boston-based Cambridge & Somerville Legal Services, handling insurance claims in disability cases for both children and adults. Levi also worked as a consultant for his father's 2006 Senate campaign, organizing campaign meetings and drafting papers on social security, health care, housing, and other social service issues, according to his profile. He's also a graduate of the University of Oregon, receiving a B.A. in history in 1992.

He also appears to have once been a fan of the current POTUS, posting in 2012 an old photo with a then-Sen. Barack Obama and writing, "I was able to have a fifteen minute conversation with him until he was dragged away by a campaign manager from the democratic party (sic). Regardless of your political persuasion, the guy has charm." Obama also campaigned for Bernie back in 2006.

While he's largely kept a low profile, Levi was recently catapulted into the news after Politico ran a story under the headline "Bernie Sanders Has A Secret." Reporter Michael Kruse details his attempts to find out more about Sanders' the Man versus Sanders the "Democratic Socialist," and that journey led him to get confirmation from Sanders' camp of a little known fact that Levi, Sanders' only biological son, was actually not born to his first wife Deborah Messing, née Shiling, as previous reports had indicated. (Shortly after his announcing his candidacy, CNN published Fast Facts about Sanders and initially listed Levi as Sanders and Messing's son. The network has since changed it.)

After 18 months of marriage, Sanders and Messing divorced in 1966, according to the Daily Mail, citing public records. Sanders then lived with girlfriend Susan Mott, and they had Levi, who was born Mar. 21, 1969. There is no record of the pair ever marrying. In 1988, then just mayor of Burlington, Vermont, Sanders married Jane O'Meara and gained three step-children.

Yes, presidential candidates pretty much relinquish any claim to privacy rights once they step into the national spotlight, but when it comes to Levi or the story behind his birth, the big fat question is who cares? It really doesn't matter that Sanders, should he win, would become the United States' second divorced president. (Ronald Reagan came first.) And it really doesn't matter whether Levi was born in or out of wedlock (an antiquated term, I know), especially when that's more the norm than not these days.