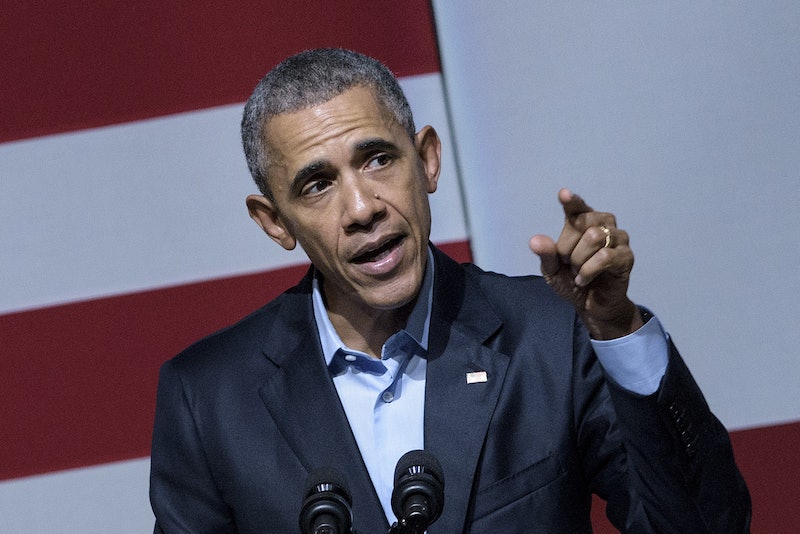 Five politicians seeking the Democratic presidential bid will take to the stage in Las Vegas Tuesday night for the first Democratic debate of the 2016 election season, hosted by CNN. Hillary Clinton, the former secretary of state and lone woman candidate, will be placed center stage — a mightily symbolic gesture, considering Clinton is currently the Democratic front-runner. She will be joined by Sen. Bernie Sanders of Vermont, former Maryland Gov. Martin O'Malley, former Rhode Island Gov. Lincoln Chafee, and Jim Webb, a former U.S. senator from Virginia. But the real ranking doesn't come in the form of CNN's podium placement, but in who Obama will endorse for president in 2016.

Notably missing from the first Democratic presidential debate is Vice President Joe Biden, whose name has been thrown around the beltway water cooler over the last month as a possible legitimate challenger to Clinton. It was rumored that Biden would make an announcement about his 2016 plans over the weekend, but so far, the vice president has remained mum. If Biden chooses to run, it would be his third presidential bid — and Obama would likely have his back.

Yet without Biden in the race, Obama's endorsement pick is still wide open. Here's a ranking of his most likely 2016 endorsements, from least likely to sure bet...

Does Obama even know he's running? That may sound harsh, but no one in America seems aware of Webb's presidential campaign. The former senator is polling at just 2 percent, according to Public Policy Polling, and his resume doesn't include the snazzy headline-making beats of Lincoln Chafee or Bernie Sanders. Webb, with his low and lackluster profile, is definitely off Obama's radar.

Lincoln Chafee may be polling around the same as Webb, but the former Rhode Island governor and U.S. senator tends to grab attention for his major switch from the Republican Party to the Democratic Party — something Chafee talks about candidly, and is not afraid of using in his campaign in the hopes of blocking a Republican from entering the Oval Office. Chafee is also notable for being the only Republican senator who cast a vote in opposition of the war in Iraq, and is not shy about blaming Republicans for America's current foreign policy issues. Although Obama has been criticized in the past for approving militaristic agendas, like the use of drones, the president can find some common ground with Chafee.

While Sanders has the fanbase and zeal to overpower Hillary Clinton, many still doubt whether the self-identified Democratic Socialist can win the Democratic ticket and fight his way into the Oval Office. Sanders' got style. He's got popular appeal. But does he have Obama's pull? The White House will surely be looking at the bigger, winnable picture, but there's something to keep in mind: Obama won't automatically endorse Clinton.

Martin O'Malley is another one of those politicians that you forget launched a campaign. There was more hope for the likable Maryland governor in the beginning, but his campaign seems to have lost its steam as Sanders surged. Yet there's hope for O'Malley, a very progressive yet traditional Democrat whose ideals are right in line with the president. O'Malley is Sanders without the spunk, but he would make a fine choice — maybe not for president, but for the vice president slot.

Although Obama has been slow to throw his weight behind his former rival, Clinton remains his No. 1 pick outside of Biden. Perhaps the most telling clue is Obama's recent defense of Clinton's private email scandal, which Obama called a simple "mistake" and ensured the public that national security was not compromised.

"We don't get an impression that here there was purposely efforts ... to hide something or to squirrel away information," Obama said Sunday in an interview with 60 Minutes.

Of course, Obama is also saving his own administration in defending Clinton, and the president still insisted that he would not endorse any candidates at this time. But if the White House is going for another Democratic win in 2016, Clinton, at this time, remains the best bet.