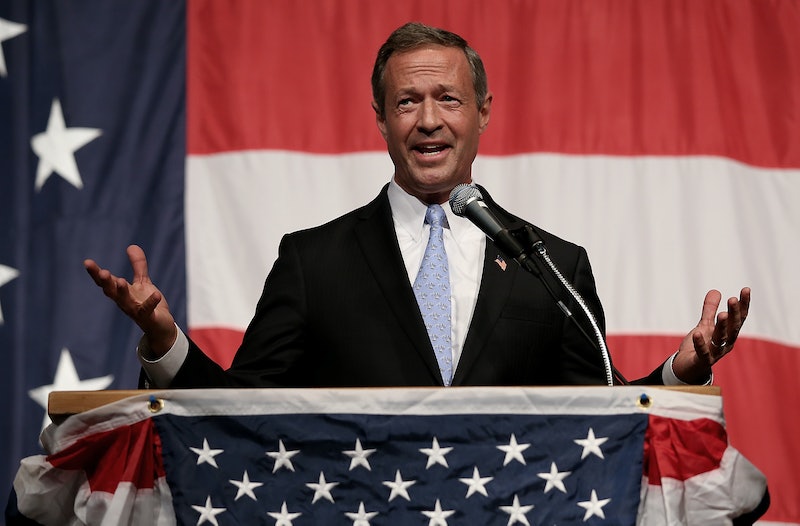 Tuesday's Democratic presidential debate will finally give the six Democratic candidates a chance to talk policy. Though it might not be as entertaining as watching the packed Republican field talk about vaccines, it will certainly help voters understand just who is a serious contender in the 2016 election. Many political analysts are predicting a stand off between former Secretary of State Hillary Clinton and former Vermont Sen. Bernie Sanders, who are leading among the Democrats. The debate will hopefully highlight where those two candidates and the others differ when it comes to social issues like gender equality. A pre-debate ranking of the Democratic candidates on women's rights puts Clinton and Sanders at the top, unsurprisingly, but Lincoln Chafee and Martin O'Malley aren't as far behind as you might have thought.

Women's issues such as reproductive health have been particularly central for candidates in this election after the conservative move to defund Planned Parenthood led to certain states stripping the organization of its Medicaid funding. Equal pay, campus sexual assault, and what candidates will do to help women have access to more leadership positions in the economy are important points that the Democratic candidates will be expected to address. Many of the candidates have entire portions of their websites dedicated to these issues, and those who don't need to get with the program. Here is a ranking of the Democratic candidates on women's rights, from those with the best feminist records to candidates that need some serious improvement.

Sanders makes it pretty clear on his campaign website that the fight to defund Planned Parenthood isn't a fight to "save babies," he says it's a fight to "deny women in this country the right to control their own bodies." This point is unique to Sanders, and it's why he ranks higher than many of the other candidates — he understands that any polices that hurt women's equality, from sexual assault to equal pay, all add up to perpetuate gender inequality through control.

What edges Sanders lightly above Clinton on abortion rights is his refrain from the "safe, legal, and rare" rhetoric, which many pro-choice advocates have said only perpetuates the stigma surrounding abortion and conservative moves to restrict access so that it's only available after a forced ultrasound or before a certain trimester, according to The Huffington Post.

And Sanders continues his fight for equality in his economic and healthcare plans. Like Clinton, he wants to help low-income women find quality childcare and increase the minimum wage to $15, which could help many single mothers living in poverty.

What proves most interesting about Sanders' stance on women's issues, though, is that he isn't fighting for issues that are only visible to young, wealthy women. For example, his Medicare for All single-payer healthcare system would help elderly women, half of whom would sink into poverty without their Social Security checks, according to The Huffington Post. Furthermore, women make up two-thirds of the low-wage workforce, and only 23 percent of low-wage jobs provide health insurance, according to Sanders' campaign website. Sanders isn't just prioritizing wealthy women — he's focusing on policies that help women whose voices often aren't heard.

Clinton has always been pro-choice, but she has often used the famous Democratic Party line about keeping abortion "safe, legal, and rare," according to On The Issues. In 2014, she called the Hobby Lobby decision a "slippery slope against women," and she was a huge supporter of getting Plan B on the market in 2006. And, during the Clinton administration, teenage pregnancy rates declined thanks to Clinton's focus on teen sex education that wasn't just abstinence only. Rates shot back up during the Bush presidency, which instituted widespread abstinence-only programs.

Clinton's economic plan also has a number of intersectional feminist goals. For example, Clinton said that part of her economic plan would be to prioritize equal pay, which is a big deal considering women make about 70 cents to the dollar a man makes, and that gap is even larger for women of color. Clinton also wants to see better paid leave available across the country, because the U.S. is one of two countries that doesn't offer its mothers and fathers any federally-mandated paid leave.

Former Rhode Island Gov. Lincoln Chafee hasn't received enough credit for his pro-women stances. Chafee has been publicly supporting pro-choice policies since the early 2000s, which is pretty surprising given the fact that he actually served as a Republican during his time as a U.S. senator, the mayor of Warwick, and as a local legislator. In 2006, during the Rhone Island Senate debate, he told the moderator that abortion laws shouldn't be left up to states because it could prevent low-income women in those states from having access to abortion, according to On The Issues. His answer seemed more practical than partisan, but he clearly understood that restricting abortion access wouldn't affect wealthy women as much, because they can afford to drive to a state with better access or invest in better reproductive healthcare. Low-income women don't often have those options.

Another interesting thing to note about Chafee's women's rights stance is that he's very big on the separation of church and state, according to MTV. He skipped his usual Episcopalian church service on his inauguration day as governor, which means that he probably wouldn't tolerate insurance companies objections to contraception on the basis of "religious freedom."

During his time as governor of Rhode Island, Chafee instituted a program that provided new parents up to four weeks of paid family leave, and his campaign website lists equal pay as one of his "priorities" were he to win the election.

Former Maryland Gov. Martin O'Malley is actually a huge women's rights proponent. He has a 100 percent pro-choice rating from NARAL Pro-Choice Maryland, and he supports late-term abortion when the mother's life is at risk or when the fetus has a severe abnormality. During his time as governor, he made no attempts to restrict women's access to abortion in Maryland. And, during his tenure, he signed a law expanding Medicaid access to women's health services that specifically aimed at helping low-income women get free pregnancy counseling, Medicaid-funded birth control, STD testing, and cancer screenings, according to RH Reality Check.

In one of the most radical stances among Democrats or Republicans, O'Malley supported public funding for abortion in a 2010 vote. Federal law prohibits federal funds from being used for abortions for pregnancies that aren't the result of rape, incest, or the mother's life being in danger, but this stance is still a clear indication of O'Malley's commitment to women's rights to make their own healthcare decisions.

O'Malley also endorsed equal pay with a Facebook status on Equal Pay Day in April. He has also bragged occasionally about the fact that Maryland has one of the smallest wage gaps for women, but he even increased the minimum wage there to try to close the gap even more, according to Think Progress.

Former Virginia Sen. Jim Webb is very pro-choice, and he has a great track record when it comes to focusing on poverty, inequality, and economic justice, according to MSNBC. But most damning to Webb is a 1979 essay that he wrote for the Washingtonian titled "Women Can't Fight," where he argues that the only thing that's corrupting the U.S.' national defense strength is women. In the essay he says that when women were pushed toward the battlefield, rapes and wife beating increased. It's frightening that his solution was to remove women from the battlefield, and not to treat the toxic misogyny that was leading to rapes and wife beating. But it's important to acknowledge that this essay was written a long time ago, and Webb's policies have shown support for women.

In April, on Equal Pay Day, Webb shared a Facebook status saying he was proud to have voted for the Lilly Ledbetter Act in 2009. But, unfortunately, there is no specific portion of Webb's website that is dedicated to equal pay. It's strange given that the issue is a major talking point for each of the above candidates, and if Webb supported the Ledbetter Act, then why wouldn't he support specific legislation to force more transparency when it comes to equal pay? Webb needs to expand upon how he would fight for women.

Harvard professor Lawrence Lessig doesn't have a track record in government, so he doesn't have a voting record on women's rights issues. But Lessig is famous for his books on media, the internet, and privacy, so it wouldn't be much of a surprise that he's pretty pro-choice. But he isn't really emphasizing his women's rights stances at all, because his big talking point throughout his campaign has been reforming money in politics.

Lessig's main reason for running is to pass the Citizen Equality Act of 2017, which would help abolish voter ID laws and establish a one-vote-per-person system. It would also use vouchers to let citizens decide what candidates get the money to run. Voting equality is a feminist issue, especially given the fact that many states have instituted restrictive voter ID and early voting laws that have made it more difficult for rural, elderly, and low-income voters to get their ballots in. Because so many single mothers can fall into that low-income bracket, these laws could have a huge effect on them. Lessig's plan would help address that, but that's really the only issue he has discussed. Lessig has been criticized heavily for running a "single-issue" campaign, and his lack of flexibility when it comes to important social issues like women's rights could alienate many voters.