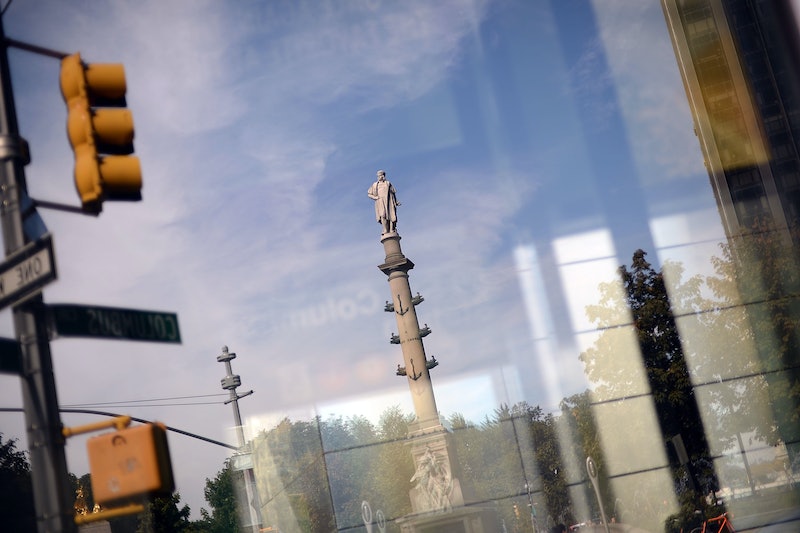 One of the most shocking, and upsetting, moments of your adult life was probably learning the full story of Christopher Columbus. Almost every elementary school textbook hails him as a hero who "discovered" America, whose tireless crew on the Niña, the Pinta, and the Santa Maria risked their lives at sea so that we can have a place to call home today. Not so much, say actual history and facts. What really happened was, in short, that Columbus and his men found land that was already inhabited, instigated mass genocide, and then went back to Europe with the fame and glory of having discovered a New World.

If this is a hard truth to swallow, or you still sing that "sail on, Christopher Columbus" song every October (stop that, what are you doing?), then don't take it from me or the many, many historical and scholarly texts that document these accounts. Instead, take it from these Columbus Day memes, which convey just how messed up the holiday really is.

For much of our lives, we never questioned why Columbus had a federal holiday in his name. The guy discovered the Earth is round! That's totally holiday-worthy! What our textbooks neglected to tell us, however, was that Columbus and his men didn't discover anything. They merely stumbled upon land already inhabited by indigenous peoples. Europeans proceeded to kill 70 million to 100 million of said inhabitants over the following years. Not only is that not holiday-worthy, but it's absolutely absurd that the man is celebrated, and not reviled as one of the worst mass murderers in history.

If you think that's an unfair assessment of the guy you drew pictures of in second grade, then feast your eyes on these 14 memes, which convey the same ugly truth in much funnier ways. And if it's a meme, then it must be true, right?

More like this
14 Last-Minute Halloween Costumes That Only Require A Flannel Shirt
By Kirsten Nunez
How To Dress Up As A ‘Squid Game’ Character For Halloween
By Emma Carey
64 Genius Gift Ideas For Every Single Guy In Your Life
By Teresa Newsome, Mia Mercado and Brittany Leitner
12 Easy Halloween Costumes You Can Wear With A Denim Jacket
By Kirsten Nunez and Bustle Editors
Get Even More From Bustle — Sign Up For The Newsletter