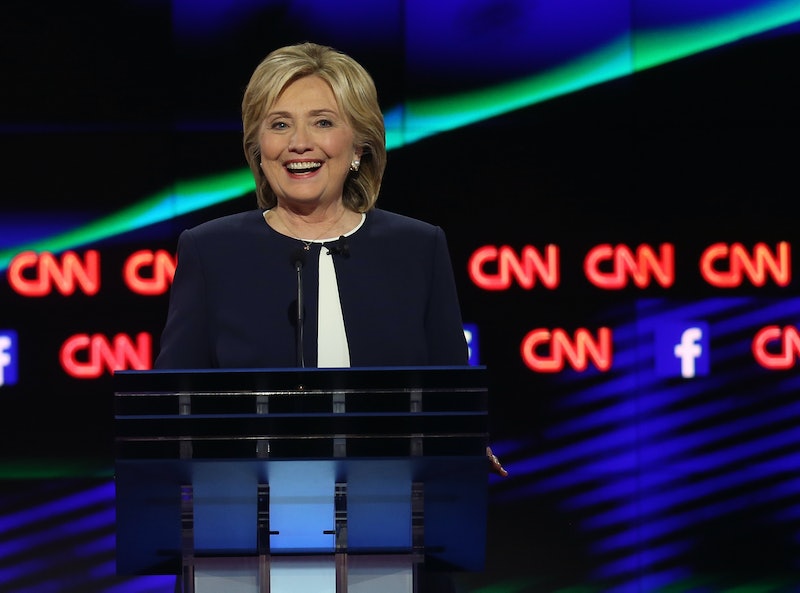 Former Secretary of State Hillary Clinton went head to head with four other Democratic presidential candidates in Tuesday night's first Democratic debate. The candidates talked about why Black Lives Matter should still stand over "All Lives Matter" and the importance of addressing climate change. Clinton's closing statements at the debate highlighted her experience and the importance of rebuilding the middle class the old-fashioned way, but she didn't spend much time on other cornerstone issues that she's been focused on, like women's rights.

During the debate, Clinton finally had to face off with her primary opponent, Vermont Sen. Bernie Sanders, on issues such as healthcare, immigration, and income inequality. Although Clinton is still the leader among the Democrats, she has been losing ground to Sanders for the past few weeks. Two things have been affecting her poll numbers: the Benghazi committee's investigation into her emails and the fact that she has lots and lots of corporate money behind her campaign. Sanders doesn't have either of those things, and he's been able to garner a comparable amount of funding to what Clinton has. But Clinton's closing statement showed perfectly why her support won't wane, and why she will keep fighting for the middle class.

I think what you did see is that in this debate we tried to deal with some of the very tough issues facing our country that in stark contrast to the Republicans that are currently running for president. What you have to ask yourself is, "Who amongst us has the vision for actually making the changes that are going to improve the lives of the American people? Who has the tenacity and the ability and the proven track record of getting that done?"

Clinton's debate performance was the right amount of assertive, humorous, clear, and intelligent. She didn't let moderator Anderson Cooper throw her off when he grilled her about her emails, and instead stuck to the issues that help her stand out among the candidates, like her years of experience as secretary of state and her commitment to getting healthcare for all children — both of citizens and undocumented immigrants. Though Sanders and Clinton both want to take on the giant that is campaign finance reform, it's a tricky issue for Clinton to address, since most of her campaign is funded by super PACs and large corporations. Because of this, policy analysts said that Clinton need to use the debate to remind people why they like her and why she deserves their support.

And Clinton did just that, but not to the extent that her supporters might have expected. She spent time on the things that matter most to her supporters, rather than trying to defend herself in areas that would only alienate her supporters who have jumped to Sanders' ship. She recalled advice from her late mother, Dorothy Howell Rodham, during her closing statements:

Now I revere my late mother, and she gave me a lot of good advice, but one of the best pieces of advice she gave me was, "You know, the issue is not whether or not you get knocked down, it's whether you get back up." America has been knocked down. That Great Recession — nine million people lost their jobs, five million lost their homes, 13 trillion dollars in wealth disappeared. And although we've made progress, we're standing, but not running the way America needs to. My mission as president will be to raise incomes for hardworking middle class families and to make sure that we get back to the basic bargain that I was raised with: If you work hard and you do your part, you should be able to get ahead and stay ahead. Please join me in this campaign. Please come and make it clear that America's best days are still ahead.

Clinton's words were a rallying cry for the middle class. The idea of working hard and staying ahead kind of relates to income inequality, but not directly. Clinton's statement sounded eerily similar to the statement that some Republicans have made — that if you work hard, you'll get ahead, and you won't need help. Obviously, that's not what she said at all, but she didn't make it clear enough that she is going to champion the rights of women, immigrants, and black people suffering from police brutality. All of these are things she touched on during the debate, but she didn't give them a mention in her broad closing statements.

Clinton's debate performance was strong overall, but her closing statements didn't hammer home the idea that she's going to stand with the Americans whose voices have been ignored for too long.