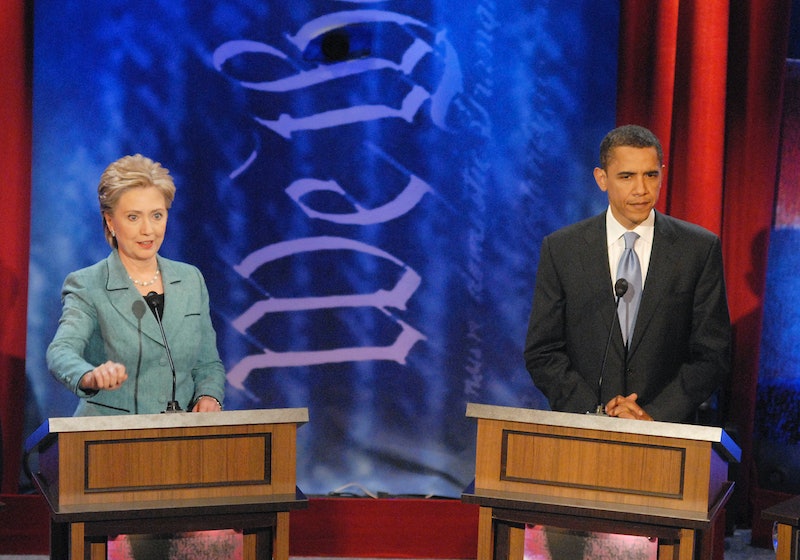 Hillary Clinton is no stranger to the debate stage, as this is her second time running for president. In the 2008 election, she participated in 26 primary debates before Barack Obama was eventually given the Democratic nomination, so she's had a lot of practice defending her beliefs to her opponents and voters. The first Democratic debate of the 2016 election season is her chance to show America that she can effectively lead the country, and to dispel doubts about her trustworthiness and abilities. Throwback videos of Clinton's previous debate performances will get you excited to see her on stage again Tuesday night, but some things will definitely be different from the 2008 debates.

From the beginning, Clinton's 2016 campaign has been extremely different than her 2008 run — she's evolved on social issues like gay marriage, has more foreign policy experience under her belt after serving as secretary of state, and is in a world with different problems than that of eight years ago. While she'll no doubt still be the strong, articulate debater she was back then, Clinton's new campaign strategies will alter the way she answers questions on Tuesday.

Here are four ways Tuesday's Democratic debate will differ from those of 2008 for Clinton.

During the 2008 primaries, Clinton was a still a New York senator, and the Iraq war was the main international debate topic. At the time, Obama criticized Clinton for voting in favor of using force in Iraq in 2002, and she defended her decision by saying she was simply giving George W. Bush the authority to handle the situation. This year, though, Clinton admitted that the vote was a "mistake," and it's not likely to come up in Tuesday's debate, since it's old news. The country's attention has now shifted to the threat of ISIS, and Clinton will be able to cite her time as secretary of state as proof that she is more equipped to handle global security threats than the other candidates.

Clinton's 2016 campaign has focused more heavily on giving all children opportunities to live up to their "God-given potential," and becoming a grandma has allowed her to talk about children's issues in a more personal way. In the same realm, she's put more emphasis on college affordability this time around, too, saying the way Americans pay for higher education needs to be drastically overhauled. She will probably talk about how to overcome the obstacles less privileged American kids face every day — including her plans for early childhood education, improving schools, and making college affordable — much more than she did eight years ago.

There have always been adamant Clinton haters, but she'll face much more personal criticism in Tuesday's debate because of the "Emailgate" scandal. Since news broke that she used a personal email server for official secretary of state business, she's had to convince America that she didn't do anything illegal and is a trustworthy leader. Whether the moderators directly ask her about Emailgate or one of her opponents blasts her for it, the controversy will definitely come up during the debate.

Just as the Republicans bashed Clinton during their first two primary debates this election cycle, Clinton is likely to criticize the GOP frontrunner, Donald Trump. In 2008, there wasn't a Republican candidate as outspoken and controversial as Trump, so Clinton's expected attacks on the real estate mogul turned presidential candidate will be entirely new and surely very entertaining. Hopefully, she doesn't hold back.