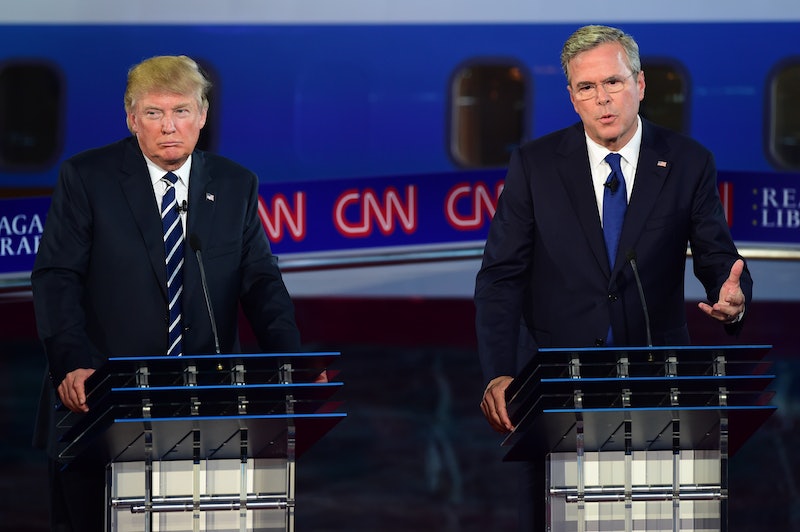 There are Halloween costumes, and there are Halloween costumes. For many, the holiday is not merely an excuse to dress as someone (or something) you're not, but an all-out, no-holds-barred opportunity to express your creativity to its max. In fact, it's kind of boggling how so many people squander this opportunity by purchasing a premade costume in a bag — which often only range from bumblebee to sexy bumblebee. Instead of choosing the lazy route this year, go for the gold. With just one getup, you can take the title of Best Costume and express your progressive views. How? With one of these nine punny liberal political Halloween costumes, which will have people bowing down to you, their new Halloween god/goddess.

This year (and likely next year), you can pretty much expect to see throngs of people dressed as Hillary Clinton, Donald Trump, and Jeb Bush on All Hallow's Eve. While those are fine ideas, and infinitely better than Sexy Custodian, they're totally expected. And, well, *yawns*. You get the idea. But that doesn't mean that the 2016 election cycle can't still provide inspiration for a truly original, clever, head-turning costume that will prompt a chorus of "I'm not worthy" from others. Channel your favorite Democrats, or poke fun at the GOP candidates with a puntastic twist. Trust me, these costume ideas are so good that you'll be able to recycle any one of them for election year and win Halloween all over again.

Step 1: Apply self-tanner liberally all over your exposed parts (face, neck, hands, etc.) in the orangest shade you can find.

Step 2: Put on a suit jacket and pants, a button-down shirt, a super-corporate-looking tie (the uglier the better), and dress shoes, and top it with a really dramatic comb-over wig.

Step 3: Talk about deporting illegal immigrants, boast about your wealth, make misogynistic and un-PC remarks, and act like a pompous ass in general. Bonus points if you or a friend can carry a small electric fan around and blow wind into your comb-over the whole night.

Step 2: Paint vibrant red, orange, and yellow flames on your outfit, or get this blue-flamed shirt to represent your political party.

Step 3: Interrupt whatever party you're at by commanding everyone's attention with a megaphone and start shouting about closing the income gap while doing the Bernie Sanders half-point.

Step 1: This one is easy because Hillary Clinton provides everything you need for your costume right on her official campaign site. You'll need the Grillary Clinton apron, spatula, and the Pantsuit T-shirt for good measure.

Step 1: Get a gray men's wig and thin-framed glasses.

Step 2: Fashion together a bush costume by gluing leafy branches and twigs to a disposable t-shirt and pants. Here's your inspiration:

Step 3: Try to sit or stand still for as long as possible in silence, because bushes don't move or talk.

Step 1: This costume is pretty self-explanatory. Basically dress like Abraham Lincoln: top hat, dark beard, 19th-century suit. You can get the whole outfit on Amazon.

Author's note: I've always thought of this as my own personal slogan for Joe Biden — both the politician and the man. Whenever I listen to "Diamonds" by Rihanna, I sing "shine bright like Joe Biden" during the chorus. YouTube video to follow shortly.

Step 1: Whiten your teeth a few days in advance to replicate Biden's megawatt smile. While you're at it, practice your smile, because your smile game is probably not up to par with Biden's.

Step 2: Get a white wig, a sharp suit and tie combo, and aviator sunglasses. Glue fake diamonds all over the suit.

Step 3: Walk through the room and blind everyone in your path with your Joe Bidenness.

Bern Down For What

Step 1: This one is open for multiple interpretations, but the idea is to be the perfect marriage of Bernie Sanders and Lil Jon. You can go with Bernie's white wig and Lil Jon's wraparound shades and baseball cap, or you can opt for Lil Jon's dreads and Bernie's dorky dad glasses. But always include Lil Jon's grillz. The grills are crucial.

Step 2: Bring a boombox (or an iPhone will do) and spontaneously play "Turn Down For What" and break into convulsion-like dancing. This costume comes with an added responsibility: getting everyone at the party turnt.

Step 1: Sketch a game plan, because this one will take some finesse. You want to look simultaneously like a clean-cut, handsome, middle-aged politician and an empowered, psychedelic, wild and free pop singer. It's a paradox, this costume.

Step 2: Put on your combination of gray wig, maybe a harness bra, office tie, shorts, and a candy necklace. Be confident.

Step 3: Recite Martin O'Malley's slogan, "Rebuild the American dream," with your tongue out.

Step 1: Don Rand Paul's famous curly mop (any grandma wig should do) and his usual suit and tie getup. But instead of a button-down shirt, wear a Planned Parenthood t-shirt underneath (bonus points if it's the pink one that Scarlett Johansson designed).

Step 2: Walk around the party saying "I realized I was full of sh*t" while passing out Planned Parenthood pamphlets.