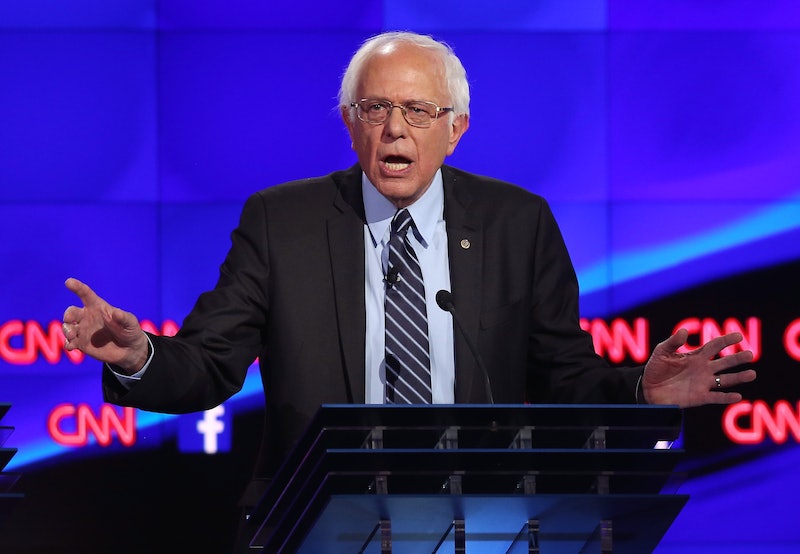 Punches were thrown, and the fight at times became heated, but one thing was for certain by the end of Tuesday's first Democratic primary debate: Bernie Sanders knows how to win over a crowd. Throughout the evening, the Vermont Senator was relatively grounded and realistic, delivering surprisingly frank answers with which a large portion of Americans could relate — much to the delight of undecided and supportive voters alike, many of whom have grown tired of the usual dog and pony show trotted out at most political jamborees. But it was Sanders' candid closing statement at Tuesday's debate that really brought down the house.

Like Republican rival Donald Trump, Sanders has managed something that few of his Democratic colleagues have been able to achieve over the past few months. Playing to the exhaustion of the American people, Sanders has captured the vote of the frustrated, low-to-middle-class voters — specifically, those who feel as if both of the major political parties have failed them. Whether or not his radical promises actually have the capability to turn into long-term, tangible policy doesn't matter to the beleaguered left-wing voter; for the time being, Sanders is an undeniable breath of fresh air.

"This is a great country," Sanders said at the close of Tuesday's debate, speaking on the issues that he would tackle if elected president. "But we have many, many serious problems."

Sanders has been steadily climbing the ranks of the Democratic polls since first entering the presidential race at the end of April this year, much to the chagrin of rival Hillary Clinton, against whom Sanders says he harbors no ill will. That sort of blatant refusal to take part in any political mud-slinging, as well as his revolutionary agenda to upturn partisan inaction, has helped draw enormous crowds at his scheduled campaign stops. When coupled with his easy debate performance, as one former rival explained in an interview with CNN on Monday, Sanders becomes something of a triple threat — and by the end of Tuesday's debate, that much was easily apparent.

"He is very relaxed and familiar, like a college professor just getting up there speaking," said Republican John MacGovern, who debated Sanders in Vermont's U.S. Senate race in 2012. "But he can be very aggressive, very strong [too]."

In his closing remarks, Sanders tapped into the spark that launched him to the tops of the polls, rounding out the evening with a few more statements on the need for a political revolution:

Now, at the end of the day, here is the truth that very few candidates will say: nobody up here, certainly no Republican, can address the major crises affecting our country, unless millions of people begin to stand up to the billionaire class that has so much power over our economy and our political life. Jim Webb is right — money is pouring into this campaign from super PACs. We are doing it the old fashioned way: 650,000 individual contributions. And if people want to help us out, BernieSanders.com, we are averaging $30 a piece, [and] we would appreciate your help.

Whether those remarks will keep Sanders' ballooning success on the up and up is yet to be seen — but if history is any indication, rivals of the self-proclaimed socialist outlier will have much more to worry about in the coming months.