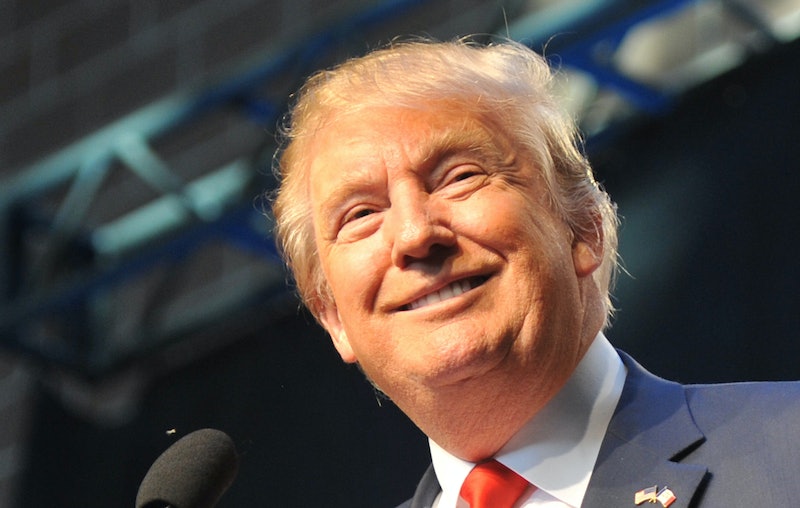 The best Halloweens fall during presidential campaigns — at least, in my humble, nerdy opinion. And the best of the best Halloweens fall during presidential campaigns in which Donald Trump is a Republican contender. Trump has already left his mark on the 2016 campaign cycle by being the first Republican contender to be blunt about his racist and sexist opinions, rather than using coded language like most candidates usually do. For example, he said that Mexican immigrants are rapists and drug dealers, and attacked Megyn Kelly with a (very) gendered insult. We should obviously memorialize these horrible and entertaining moments in history with Donald Trump Halloween costumes that will terrify everyone.

Trump released a sexy Trump costume, but please don't buy it. First of all, the wig that goes with the costume is not at all authentic, and it seems to indicate that Trump's hair is much thicker than it actually is. Second, "sexy" and "Donald Trump" are not two things things that belong in the same sentence — let alone in a costume. If you really want to be Trump for Halloween, you have to commit to the project, because being a good Trump means being brash, racist, sexist, and using every muscle in your face to look unimpressed. First, you will have to find the right wig, or at last dedicate time to giving your hair a ridiculous flip at the front.

You can achieve this look with lots of bobby pins, hair spray, and maybe some mousse. If you want to buy a wig, there are Donald wigs out there, but they're going to cost you (and do you really want to spend a lot of money on this costume?). The popular wig shown below, which was being sold for $15.95 at Wal-Mart and $19.99 on Amazon, is now sold out because people are just that ready to get their Trump on.

If you wanna get really creative, you could try to go for this windswept look, which might require some hair glue or cement, or really intense Got2b Glued hairspray, but you can do it.

Generally, this is the effect you're going for:

Once you've conquered the hair, you just need a basic suit. You could borrow a friend's, or buy a cheap one at Goodwill or another thrift store. One with pinstripes is preferable, and top it off with a red tie.

There are some pretty cheap Make America Great Again hats on eBay, but I'm not sure what you would do with it after Halloween. Have a hat-burning party? Wear it ironically?

Next, you'll need to practice your hand gestures and your facial expressions. This is like 90 percent of the costume, so make sure you take this part pretty seriously. Try the hand gestures first.

Then, try combining the hand gestures with political requests that aren't possible and operate on offensive assumptions.

Finally, try to look appalled, unimpressed, annoyed, and flabbergasted. Do all of these things whenever your female friends say something intelligent.

If you want to take out the face and the hair with one purchase, try this very frightening Trump mask from Just Imagine Costumes. Remember that with great horror comes great responsibility.

Or this mask on eBay, which comes with a great Trump 2016 button.

Or have your friend attempt this amazing Trump makeup by makeup artist Rebecca Swift.

And if you get too lazy, you can always just dress up your pet.

That said, if you're still not sure what you're going as for Halloween, kick back and watch this for some inspiration (on what not to do).

More like this
26 Easy Halloween Makeup Looks For 2022 That Require Zero Skill
By Olivia Rose Ferreiro
10 Stranger Things-Inspired Halloween Costumes For True Fans
By Emma Carey
10 Pumpkin Recipes That Are Way More Creative Than Pie & Lattes
By Rebecca Deczynski and Alexis Morillo
Bennifer, Kravis, & 14 Other Fun Celeb Couples Halloween Costume Ideas
By Emma Carey and Brittany Leitner
Get Even More From Bustle — Sign Up For The Newsletter