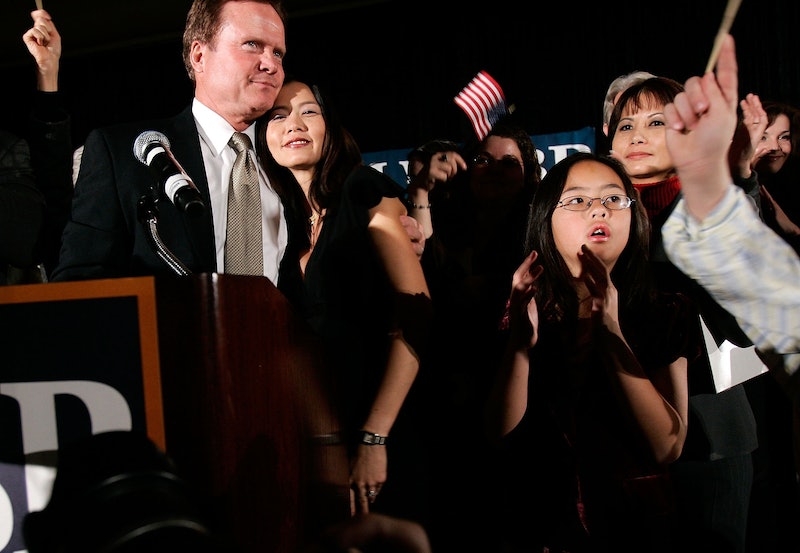 Democratic presidential candidate and former Sen. Jim Webb is largely unknown outside his home state of Virginia. But his participation in Tuesday's Democratic debate will draw questions about his family life, and voters will want to know who Jim Webb's children are. He has five biological children and one stepdaughter, and they span an age range from under 10 to 45. In their own lives and careers, Webb's children have influenced and supported their father's political campaigns, whether it was when he was running for senator or his most recent run at the Oval Office.

Webb has made his family background a feature of his qualifications for presidency. Born to a military family in Missouri, Webb attended several schools across the country and studied at the United States Naval Academy. He served with the Marines in Vietnam from 1968 to 1972 and earned two Purple Hearts, among other awards. With first wife Barbara Samorajczyk, Webb had one daughter, Amy, who has worked for Webb's political campaigns since 2006. He has three children, Sarah, Jimmy, and Julia, with second wife Jo Ann Krukar. His youngest child, Georgia LeAhn Webb, was born in 2006 to Webb's third and current wife, Hong Le Webb. And Webb has a stepdaughter, Emily, from Hong Le Webb's previous marriage. There's not a lot of information about each of Webb's children, though a couple of them have been in the news here and there.

Webb's son, Jimmy Webb, served in the Iraq War as a Marine, following in his family's long legacy of military service. Webb himself served in Vietnam and was injured twice during his time there.

Webb opposed the Iraq War during his time as senator, and wore his son's combat boots as both a tribute to the armed forces and a sign of his protest. In 2006, President George W. Bush asked Webb about his son at a White House reception, according to USA Today. "I told him I'd like to get them out of Iraq," Webb answered.

Webb and his family made headlines in late 2014 after a report was released detailing a total of more than $90,000 worth in payments made by a Webb-sponsored political action committee to Webb's family members. His wife Hong Le and 45-year-old daughter Amy Webb Hogan received regular payments from 2006 to 2014. Business Insider wrote that 10 percent of money raised by the PAC, named "Born Fighting PAC," went to members of Webb's family for their work on his campaign.

According to CNN, Webb's family members worked for Webb's senatorial and presidential campaigns, and the expenses were reimbursement for developing his personal website and official Democratic candidate's page. The Washington Post reported that a spokesperson for the Webb campaign defended the spending in a statement, claiming "the payments were well within the law, were scrutinized regularly by outside legal counsel, and were much lower than usual amounts of compensation for such services."

The Webb children appear to be supportive and loyal to their father and have not publicly shown any hard feelings despite Webb's two divorces. Amy Webb published a rather heartwarming essay about her father on the Daily Kos in 2006 during Webb's campaign for senator. It provides insight into his character and the Webb family's background. She reflects on his love of reading and writing, his integrity, and his love for his country as a soldier, historian, and politician. She wrote a warm endorsement that would probably benefit Webb if he called upon his children to provide character references this time around:

I want a Senator who is sincere about fixing the deadly serious issues at hand. Someone needs to grab the reins before this country is completely off track. I know my Dad has the intellect, foresight, and honesty to do that.