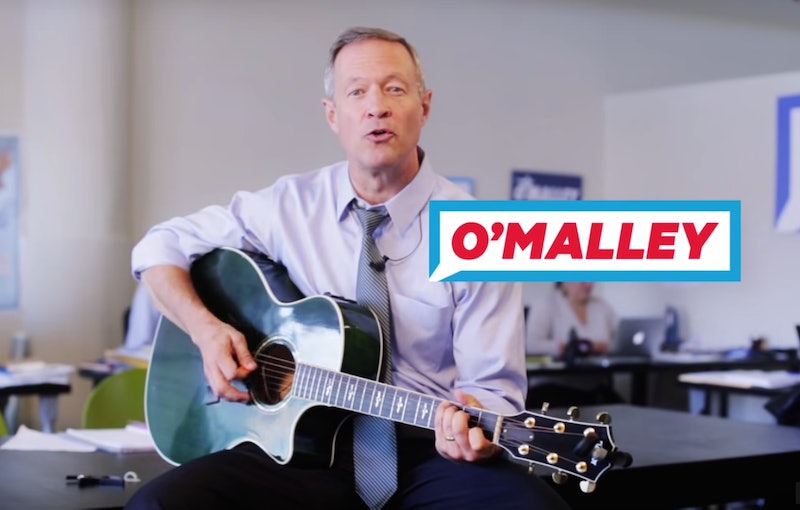 Former Maryland Governor Martin O'Malley is using his musical talents to garner support for his 2016 presidential campaign. O'Malley's campaign hosted a contest for voters who donated at least $25 by the end of the last fundraising quarter, and one lucky supporter won an adorable video from the candidate. The contest promised a personalized song from the former governor, and the video shows him sitting on a desk in a campaign office, playing the guitar and singing about his appreciation for the financial contribution.

The lucky winner was Kathryn Touloumis, a Chicago-based O'Malley fan. In the video, O'Malley sang: "The quarter's finally over. We've got more gas in our tank. I can't tell you my excitement, because it's you I have to thank. It may seem like it's just money, but to me it's so much more — it keeps my staff door knocking in Iowa, New Hampshire, Nevada, South Carolina, and more." While the beginning of the song could be for anyone, it got more personalized for Touloumis toward the end. O'Malley sang: "Thank you Kathryn for lending me your hand. Thank you Kathryn for spreading our message of new leadership across the land of the free and the home of the brave."

O'Malley's video for Touloumis shows a laid-back, artistic side of him that voters don't always see. Why can't all presidential campaign videos be this cute? I bet more Americans would pay attention to elections if more politicians were this adorable, as opposed to the typical stuffy white men in suits who have overrun Washington.

O'Malley has used his musical skills throughout his campaign, first making a video of himself strumming "Hail to the Chief" on a guitar to tease his presidential bid announcement. Since then, he's played songs for voters on the campaign trail, and is now singing his appreciation for financial contributions to O'Malley 2016.

O'Malley doesn't just play the guitar, either — he also plays the banjo and is the frontman of a Celtic rock band, O'Malley's March, which he first formed in 1988. According to the band's Facebook page, O'Malley is the lead vocalist, guitarist, songwriter, and tin whistler. The page says: "Raised on the Clancy Brothers and Tommy Makem, educated by the Jesuits and Wolfe Tones, emboldened by Shane MacGowan, seasoned by Christy Moore. Martin has played a narrow range of music his entire life: Irish." Before starting O'Malley's March, the politician has performed solo since 1985, when he was 22.