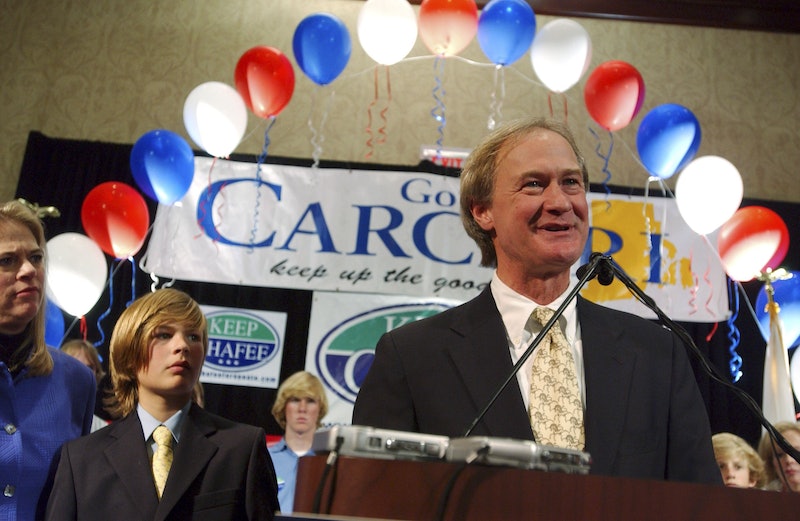 Lincoln Chafee has struggled to bring attention to his presidential campaign since it began. After all, the Democratic spotlight has shone mostly on Hillary Clinton and Bernie Sanders since the beginning. Because not many people are paying attention to Chafee, his family has largely stayed out of the media, and not much is known about his three kids. Chafee himself doesn't seem to bring them up very often. So who is Caleb Chafee, Lincoln's middle child?

Caleb is the former Rhode Island governor's only son — Lincoln also has two daughters, Louisa and Thea. The 21-year-old has stayed mostly out of the public eye, but got into some trouble when he was younger. Back in 2012, when Caleb was 18, he was charged with breaking Rhode Island's social-host law for providing alcohol to his friends at a graduation party he threw at the Chafee family's farm in Exeter, Rhode Island. The police learned about the party after an 18-year-old woman ended up in the hospital with potential alcohol poisoning.

According to The Boston Globe, Caleb asked the woman to leave the party after she got sick, telling her and her friends to call 911 once they were off his property. In August 2012, Caleb pleaded no contest to the charge and received the maximum punishment of a $500 fine and 30 hours of community service. The court record was expunged from Caleb's criminal record in 2013.

At the time of the hearing, Lincoln Chafee told The Providence Journal: "Stephanie and I are very upset."

The Rhode Island Supreme Court plans to take up a case surrounding Caleb's legal dilemma soon. In 2012, The Providence Journal requested the police reports on the case, but the police refused to hand them over. The newspaper then sued for the release of the documents, and a judge ruled last year that disclosing the reports would have been an unwarranted invasion of privacy. So now, the state's Supreme Court will hear the paper's appeal.

That wasn't the first time Caleb had an alcohol-related run-in with the law, either — earlier in 2012, he pleaded no contest to charges for trying to buy beer at a liquor store. According to The Providence Journal, he was fined $100 and had a hearing to ask for the charge to be expunged from his record, but it's unclear whether the case was removed.

Caleb now attends Brown University, where Lincoln earned a bachelor's degree in the Classics and was the captain of the wresting team.